$1B transmission smack down may upend Northeast renewables 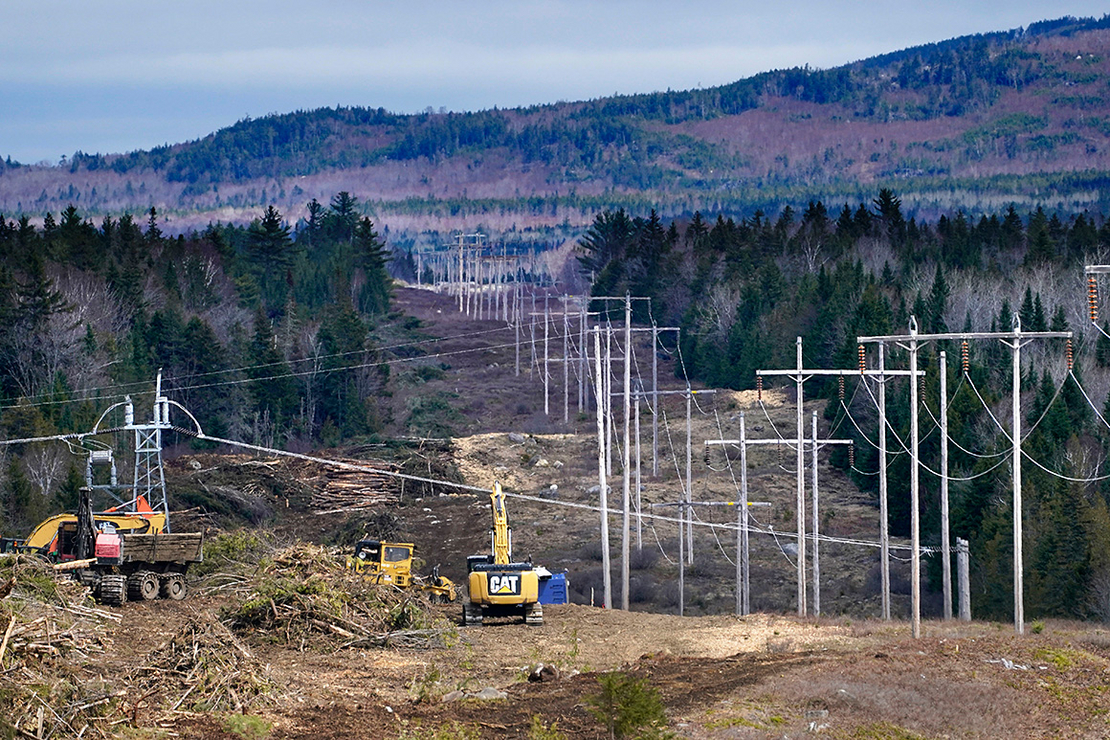 The challenge to a $1 billion New England transmission line is raising concerns about how the region’s largest state will now reach its clean energy targets, underscoring the obstacles facing large infrastructure critical for renewables and President Biden’s decarbonization efforts.

The New England Clean Energy Connect (NECEC), as the line is known, would be the region’s largest single source of low-carbon electricity if it is constructed. Developers want to bring Quebecois hydropower across the border, through Maine and into Massachusetts — the main buyer of the electricity.

In a ballot initiative this month, 59% of Maine voters chose to scramble those plans, by banning construction of “high-impact” transmission lines along the projected path, while requiring a two-thirds approval from the state Legislature for any similar project.

Developers have vowed to keep fighting for their project. But while the line isn’t officially dead yet, observers say the development exemplifies the difficulty of building big, clean power lines, even as Congress and the White House approve policies intended to stoke a nationwide expansion of them.

“This is a preview. This is a trailer,” said Joshua Hodge, executive director of the MIT Center for Energy and Environmental Policy Research (CEEPR). “How do we build transmission? How are we going to convince folks that we have to do this?”

The election’s outcome also could send energy planners in Massachusetts back to the drawing board in determining how they will ensure the grid’s stability while bringing large amounts of low-carbon power online.

Six of the region’s states have pledged to cut greenhouse gas emissions by at least 80 percent by midcentury. Massachusetts, the region’s juggernaut of population and energy consumption, has committed to going much further: A law passed this year requires it to halve emissions by 2030 and hit net-zero by 2050.

Complying with those goals is likely to depend, among other things, on the rise of an offshore wind industry and the build-out of far more solar.

But state energy officials and some energy researchers have questioned whether renewables and energy storage will be sufficient to guarantee the grid’s stability for those technologies. Federal scientists and startups, for instance, are still at work on storage technologies that can back up clean power over long durations and at a low enough cost to compete with fossil fuels.

Massachusetts’s strategy to date has been to buy more hydropower — a source prized largely because it can be available around the clock. The NECEC line would have been a key part of that strategy, likely allowing the state to meet approximately 17 percent of its electricity demand.

“Honestly, at the moment I don’t think there is a very good low-carbon replacement,” said Erin Baker, a professor of industrial engineering and operations research at the University of Massachusetts, Amherst, where she is also faculty director of the Energy Transition Initiative.

Energy storage and demand management strategies, or preserving nuclear plants that are slated to go offline, might come close to mimicking hydropower’s attributes, she added. But “it’s going to be more expensive, on average.”

The NECEC’s failure would mean that in the near term, at least, “we’re going to maintain more natural gas and oil,” she added. “It makes the climate goals harder to meet and almost certainly makes them more expensive.”

At present, two-thirds of the electricity produced within Massachusetts comes from natural gas. For New England’s six-state grid, that percentage falls to around 50 percent.

Hodge of MIT said the region’s energy and climate plans should reflect the fact that electrons flow freely across a shared grid. “Ideally, you’d have a coordinated decarbonization plan across all six New England states.”

The NECEC’s experience in Maine, he added, “underscores the need for regional strategy and coordination across the states.”

“In some ways, this is a flashing yellow light,” Hodge said.

The NECEC’s icy reception in Maine also may provide a glimpse into future controversies in other parts of the country.

“We’re talking about New England today, but we could be having the same conversation about other regions,” said Hodge.

The Biden administration is trying to make it easier, financially and permitting-wise, for developers to build new interstate transmission lines. The reasoning is that if clean power can be moved across thousands of miles, the most efficient wind and solar generators could find new markets in the grid’s dirtiest places.

A new Grid Deployment Authority under the Energy Department’s auspices, for instance, could help finance high-priority projects. Regulators at the Federal Energy Regulatory Commission could override states that block projects. And tens of billions in loans and borrowing authority will flow to upgrades, planning activities and financing for new lines.

In total, the legislation is “the largest investment in clean energy transmission and the electric grid in American history,” according to a White House fact sheet.

New England’s struggles also are distinct, in some ways. Few other regions are seeking out large, new deliveries of hydropower, which has a fraught history with environmentalists and First Nations groups. And although all six states in the region are eyeing big emissions cuts, they have weaker onshore wind and solar resources than many other parts of the U.S.

Still, “it’s hard to imagine a region where more transmission wouldn’t help,” said Jurgen Weiss, a senior lecturer at Harvard Business School. And across the U.S., “whenever you try to go across state lines, it tends to get trickier,” he said.

From Biden to First Nations

Since the election’s results became clear, energy officials in Massachusetts have reaffirmed their backing of the power line, without providing full details publicly on how their climate plans might change if the project ultimately collapses.

Craig Gilvarg, communications director for Massachusett’s Executive Office of Energy and Environmental Affairs, said the administration of Gov. Charlie Baker (R) was “reviewing the outcome of the ballot initiative” and would work with the developers “on the path ahead to securing more affordable, renewable energy for Massachusetts.”

Regardless of the outcome, the fight was indicative of the broad number of players that can get involved in — and influence — transmission fights, ranging from the White House to utilities to tribal groups.

In the days leading up to the ballot initiative in Maine, the Biden administration had put its stamp of approval on the NECEC, via an Oct. 28 Twitter post from Energy Secretary Jennifer Granholm, who urged locals to support the line.

“I hope Mainers vote NO on ONE to keep this project moving and reliable, affordable, #CleanEnergy flowing!” she wrote.

But the anti-NECEC opposition prevailed in the vote, arguing the project should be canceled for a variety of reasons. Conservationists and recreational sportspeople claimed the line would spoil Maine’s iconic wilderness and cut through precious wildlife habitats.

Some environmentalists argued it would merely shift hydropower sales from other Canadian markets, doing little to reduce overall emissions. First Nations groups saw the line as an extension of colonialism, saying much of the hydropower supplies would be generated on unceded land.

That diverse opposition, which pulled in a bipartisan group of state lawmakers, had help from incumbent gas and nuclear operators like NextEra Energy Inc., Vistra Corp. and Calpine Corp., who poured tens of millions of dollars into advertising — though they were outspent by developers Central Maine Power Co. and Hydro-Quebec, according to data from the Maine Ethics Commission.

Anti-NECEC campaigners hammered home the idea that Maine was being forced into the role of a staging ground for its neighbor’s infrastructure. While more than a sixth of Massachusetts’ yearly power demand would be met by the NECEC’s deliveries, Maine would receive a far smaller proportion of electricity, in tandem with hundreds of millions in tax benefits and energy subsidies.

It’s not the first time a hydropower line was struck down in New England. An earlier proposal to bring large volumes of hydropower into Massachusetts, the Northern Pass line, was met with a similar rebuke in New Hampshire. Developers pulled the plug on that project in 2019.

Weiss once testified as an expert witness in regulatory proceedings for the Northern Pass project.

“My sense is the reason why this [the NECEC] might not work out is pretty similar,” he said. “In that the whole project is perceived as benefitting Massachusetts and destroying the landscape in — fill in the blank with a state.”

Jeremy Payne, executive director of the Maine Renewable Energy Association (MREA), gave different explanations for why Mainers came out against the project.

Public discontent with Central Maine Power’s service was already widespread, as evidenced by the utility’s poor showing on J.D. Power surveys in previous years, he said. And CMP and other developers hadn’t done enough from the outset to engage Mainers, offering local benefits only after blowback began to manifest itself, he added.

“I don’t view this as a referendum on energy infrastructure needed in cleaning up supply. This is a referendum on a deeply unpopular utility,” said Payne, whose group had opposed the NECEC on the grounds that it could box out a market for Maine’s wind and solar industries.

“It’s my firm belief this was about almost entirely about Central Maine Power,” he added.

In the future, he said, Massachusetts and other states in New England would be able to connect to hydropower supplies for their climate goals — as long as the developers did a better job of listening to locals.

“I don’t really view it as this Chicken Little scenario, where truly the sky is falling,” he said.

CMP and Hydro-Quebec — the supplier of the line’s power — have repeatedly defended their project as presenting an economic windfall for Maine that would also help decarbonize New England’s shared grid.

In an August interview with E&E News, Thorn Dickinson, CEO of CMP-owned subsidiary NECEC Transmission LLC, said the line would bring “a huge economic stimulus” as well as “cleaner air for Maine,” adding that although his company had heard of “some concerns some people had” with CMP’s service, “over the last couple of years the company’s done a good job” of improving.

On Oct. 2, not long after the election’s results were announced, Ted Varipatis of Clean Energy Matters, a pro-NECEC group, vowed to push the project past the finish line.

“We believe this referendum, funded by fossil fuel interests, is unconstitutional. With over 400 Maine jobs and our ability to meet our climate goals on the line, this fight will continue,” he said.