A pipeline shutdown? Midwest war heats up over FERC permit 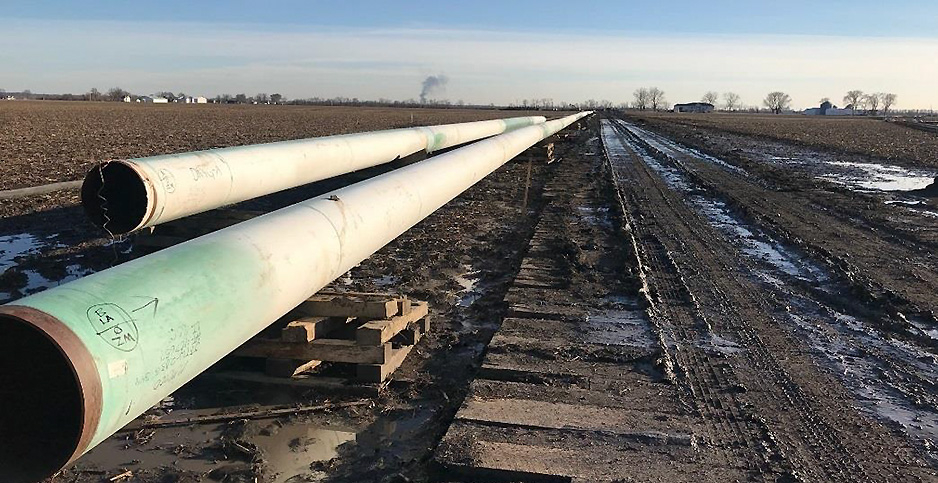 A fight over the future of a Midwest natural gas pipeline escalated yesterday, as the project’s developers warned it could shut down this winter while critics accused them of misleading the public about fuel shortages.

Completed in 2019, the 65-mile Spire STL pipeline is currently operating in St. Louis with a temporary permit from the Federal Energy Regulatory Commission that expires Dec. 13. Although FERC approved the project in a 3-2 vote three years ago, a federal court yanked Spire STL LLC’s original permit in June after it found that FERC had overlooked evidence showing that the pipeline wasn’t needed (Energywire, Sept. 8).

The legal case has drawn national interest, since it may compel FERC, which has jurisdiction over interstate natural gas pipelines, to change how it broadly determines whether gas projects should be approved.

FERC has approved more than 99 percent of proposed natural gas pipelines by some estimates, often relying on the existence of so-called precedent agreements between developers and one or more customers when deciding whether to authorize a project.

“The case has made clear the need for FERC to reform its reviews going forward of pipeline infrastructure and make sure it does the rigorous assessment Congress entrusted it to do under the Natural Gas Act,” Natalie Karas, lead counsel and senior director at the Environmental Defense Fund’s energy program, said in a call with reporters yesterday.

The court ruling from the U.S. Court of Appeals for the District of Columbia Circuit also marks the first time that an in-service interstate natural gas pipeline has had its FERC permit revoked, observers say. It comes as the independent agency is already considering whether to change the “certificate policy statement” that guides its decisionmaking for proposed natural gas pipelines — a process that FERC Chair Richard Glick has said should be more thorough (Energywire, May 28).

Spire has asked FERC to allow the project to operate after Dec. 13 through the entirety of winter while the agency determines how to respond to the unanimous ruling from the D.C. Circuit.

There is no alternative source of natural gas that Spire could draw from to ensure that supply can reliably meet peak demand for all customers this winter, said Scott Carter, president of Spire Missouri, the pipeline company’s affiliated gas utility.

“Anything that would replace that is going to take time to build, require us to reconfigure our system and do other things to meet that long-term demand,” Carter said on a press call. “You can’t oversimplify these things.”

Last week, the company sent an email to its approximately 650,000 customers in the St. Louis region in which it warned of potential disruptions and outages to natural gas service if FERC does not grant its request.

Separately, it has also urged customers to contact FERC. Dozens of St. Louis-area residents have sent comments to the independent agency in the last week expressing fears about losing heat if the pipeline shuts down.

“We’re confident that we’ve done everything we can to demonstrate the critical role the pipeline plays in providing the St. Louis community with energy, but there are no guarantees it will operate beyond Dec. 13,” the company said in the email last week.

FERC declined to comment on the company’s request, which is pending. At its regular open meeting next week, the commission may issue a decision in response to several requests for rehearing on its September order that authorized the existing temporary certificate, according to a FERC notice posted this week.

“[This] applies only to the motions for rehearing of FERC’s Sept. 14 order authorizing the Spire STL to operate under emergency authority. … We do not expect action on Spire STL’s pending request for a temporary/emergency certificate,” ClearView Energy Partners said in a research note yesterday.

‘We had to be transparent with customers’

Environmental groups have accused Spire of grossly exaggerating the potential for gas service disruptions, which they say would never have been a threat were it not for Spire’s own actions over the past two years. After the Spire STL project went into service in 2019, the company altered its distribution system to accommodate capacity from its own pipeline, which made it “more reliant on Spire STL and interconnected pipelines,” according to a report released in August by the Missouri Public Service Commission.

FERC in 2019 granted the company an initial return on equity of 14 percent when it approved the pipeline, and critics say Spire wants to continue operating the conduit to make a hefty profit. Spire officials have countered that the project has lowered energy costs for St. Louis customers and helped keep gas service flowing during Winter Storm Uri in February.

Elected officials, businesses and nonprofits in St. Louis have defended Spire and urged FERC to issue a certificate to last throughout the winter. But two local politicians chastised Spire yesterday for stoking fear in the community by issuing the Nov. 4 email to customers.

“We are calling on Spire to reach back out to communicate to their customers and give them the correct, clarifying information that they need to feel safe,” said Christine Ingrassia, Ward 6 alderwoman in St. Louis.

Spire critics say FERC is all but guaranteed to allow the pipeline to remain in service throughout the winter, since the region may now be dependent on the project for heat. They say Spire should be upfront about this inevitability.

“By their own admission, they expect an extension to their temporary permit any day now,” Lisa Clancy, county councilwoman for the 5th District in St. Louis County, said during the press call with EDF yesterday.

Clancy and 11 other local leaders have asked FERC to issue a “rate cap” while the project remains in service so that the company does not profit from its alleged “self-dealing.”

In the June ruling from the D.C. Circuit, the court found that FERC had ignored evidence of self-dealing, because the proposal involved a precedent agreement between affiliated companies, Spire STL and Spire Missouri.

Jason Merrill, director of integrated corporate communications for Spire, said it is his understanding that the pipeline is “likely” to continue operating throughout the winter. But there is still no guarantee until FERC takes action, he said.

“We were in a position where we had to be transparent with customers,” Merrill said. “This is not a message you tell people on Dec. 13th if there’s no STL pipeline. At this point, you’re into November and there’s no guarantee that we know of.”