Biden backtracked on drilling ban. What it means for CO2 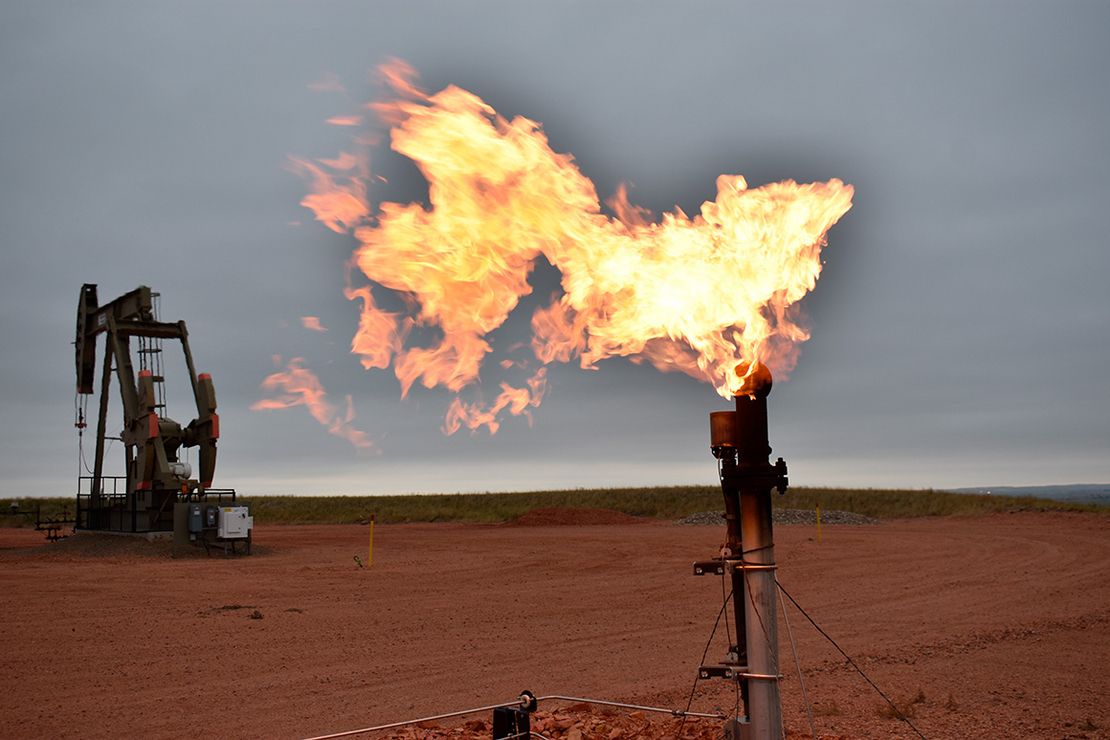 A flare burns natural gas at an oil well in August near Watford City, N.D. The Biden administration called for an overhaul of the nation’s oil and gas leasing program, but experts say it could have a small effect on climate change. AP Photo/Matthew Brown

Joe Biden was on the campaign trail in New Hampshire last year when he made one the flashiest pledges of his presidential run.

“And, by the way, no more drilling on federal lands, period. Period, period, period,” he told voters in February before the election.

Fulfilling the pledge has been a challenge.

A federal judge in Louisiana blocked the administration’s pause on new oil and gas leases on federal land over the summer. And when the Interior Department released long awaited recommendations for overhauling its leasing program last week, it was silent on the topic of banning new leases (Energywire, Nov. 29).

It prompted cries from some environmental groups that the president had violated a major campaign pledge. But analysts say measuring the emissions impact is complicated.

“The leasing ban numbers are not trivial, but they are not going to make or break an NDC commitment or something like that,” said Brian Prest, a fellow at Resources for the Future, referring to the commitments countries make to cut emissions under the Paris climate accord.

Federal lands, including offshore development, accounted for almost a quarter of U.S. oil production and more than 10 percent of natural gas output in fiscal 2020, according to Interior. Analysts have long argued over whether a ban on new leases is an effective way to lower emissions.

Some say it would push development elsewhere and could even drive up greenhouse gas levels by encouraging production of dirtier varieties of crude. An April analysis by Wood Mackenzie found that only Saudi Arabia has lower emissions intensity than oil produced in federal waters in the Gulf of Mexico.

“The bottom line is if you want to affect emissions you have to lower demand,” said Marianne Kah, a former chief economist at ConocoPhilips Co. who now serves as a senior researcher at Columbia University’s Center on Global Energy Policy.

They contend many models overestimate the amount of lost federal production that would be made up elsewhere. And they note that comparing the emission intensity of oil production in different regions ignores the fact that most of the CO2 from oil and gas comes from burning those fossil fuels — not drilling for them.

Take the Gulf of Mexico as an example. Drilling and transporting oil from the Mars oil and gas field produced 70 kilograms of carbon dioxide per barrel, according to the Carnegie Endowment for International Peace’s Oil Climate Index. Burning that oil produced 438 kg of CO2 per barrel.

“Leaving oil in the ground in one place is a way to reduce global oil consumption,” said Pete Erickson, who leads the climate policy program at the Stockholm Environment Institute. “In the big picture, it is just not true that if you leave some oil undeveloped it will be substituted one for one with someone else’s oil.”

In its recommendations last week, Interior made only passing mention of climate. Instead, it focused on reforming the oil and gas leasing program with higher royalty rates and more stringent bonding requirements to ensure that wells are cleaned up.

The agency did not propose a specific royalty rate, but Congress is weighing one. The "Build Back Better Act" would raise the royalty rate for onshore oil production to 18.75 percent, up from 12.5 percent (Greenwire, Nov. 22).

That would result in an annual emissions reduction of 4 million tons to 7 million tons after accounting for the policy’s impact on global oil markets, according to an analysis by Resources for the Future. Banning new leases outright, by contrast, would yield annual reductions of 85 million tons to 147 million tons, RFF found.

There is wide agreement among climate experts that efforts to restrict fossil fuel production on public lands pale in comparison to other climate initiatives being pursued by the administration.

Jon Goldstein, a senior director at the Environmental Defense Fund, said the debate over a leasing ban is secondary to the climate impact of new methane regulations on oil and gas wells. EPA estimates that its proposed methane rule on oil and gas wells would reduce 920 million tons of CO2 equivalent through 2035.

“It’s not to downplay the importance of royalty and bonding reform. That stuff is critically important for other reasons,” Goldstein said. "But from a strictly tons perspective, the needle is going to get moved the most by getting these regulations right.”

Reducing emissions from oil and gas ultimately requires lowering the supply and consumption of those fossil fuels, said Alex Dewar, a consultant who tracks the oil and gas industry at the Boston Consulting Group. But restricting development on public lands is a relatively weak decarbonization tool next to the incentives for electric vehicle adoption contained in the "Build Back Better Act," he said.

“Rather than focus on oil and gas leasing as a decarbornization lever, the focus ought to be on how transportation electrification can be accelerated,” Dewar said. “That will have the most impact on emissions in an aggregate way.”