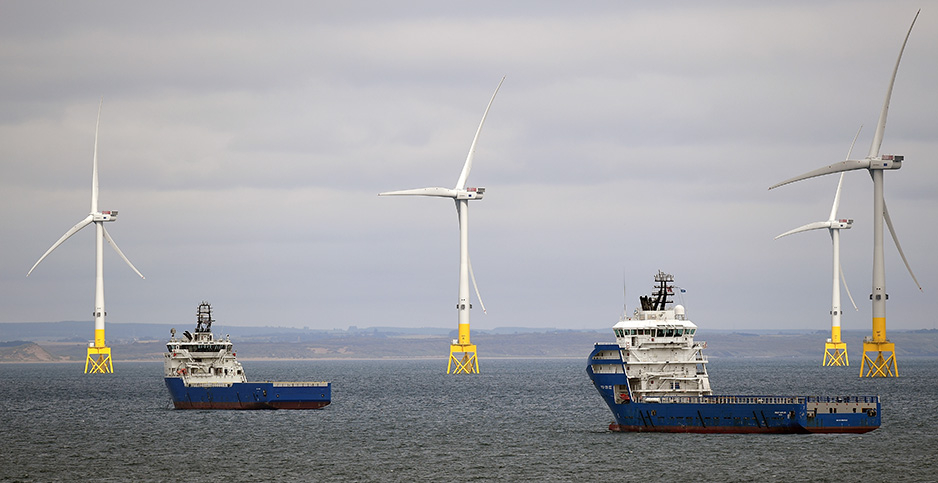 The Biden administration and states like California are pushing for offshore wind development that would use floating turbines similar to these seen near Aberdeen, Scotland. Jeff J Mitchell/Getty Images

Almost half of the Biden administration’s target for new offshore wind construction could arrive in the form of floating turbines, a technology that is rapidly winning state-level support on both U.S. coasts.

But in the U.S., they’ve started to appear on the agendas of state policymakers looking to slash power sector carbon emissions.

Legislators in three states have enacted laws that could lead to 12.6 gigawatts or more of floating wind power in 2030 — a sizable chunk of the Biden administration’s 30 GW goal for that date. Two of the state laws, in Oregon and California, came in the last four months.

The newest measure, signed by California Gov. Gavin Newsom (D) on Thursday, requires state energy officials to make a road map for an offshore wind industry, with a specific gigawatt target for 2030 and 2045. Every gigawatt would need to come from floating turbines, since California’s coastal waters grow too deep, too quickly for the traditional, fixed-bottom type of turbine bolted into the seafloor.

Wind advocates celebrated it as a breakthrough that will lay the groundwork for a commercial-scale industry.

"Today’s signing … marks the beginning of a new chapter for the offshore wind industry in California and the Pacific Coast," said Nancy Kirshner-Rodriguez, Western director of the Business Network for Offshore Wind, after Newsom signed the bill.

Habib Dagher, a University of Maine engineer who heads development of a floating wind pilot off the Maine coast, called the California law "foundational for an industry to grow in the United States."

East Coast states deserve much of the credit for luring offshore wind developers using fixed-bottom turbines, he noted, by passing laws requiring utilities to buy certain amounts of power from the resource. California’s law will eventually lead to a similar mandate for floating technology.

"These are the ingredients for creating life in this industry," said Dagher.

Yet the floating turbines are raising sharp questions about economic trade-offs and environmental impacts.

Conservationists caution that the architecture of floating turbines — especially the cables used to moor the platforms — could harm marine life and birds in ways that aren’t well studied. The cost of the electricity they produce is likely to be much higher than that of traditional offshore wind for at least the next decade. On the West Coast, upgrades to the electrical grid needed to accommodate the technology will come at an uncertain price, particularly in wildfire-prone California.

The same conflicts that have plagued many traditional offshore wind projects could appear, too. Fishing groups have already warned energy officials in Oregon that their activities would be "severely limited" by wind farms. Some property owners in California have also balked at the prospect that some turbines could be seen from shore.

Generally, he said, "the number of conflicts will diminish as you go farther out from shore." That’s where floating platforms shine, he noted: Not only could they produce more electricity from windier sites, but they could conceivably operate so far from shore they’d be invisible to coastal property owners.

Still, key questions remain about the technology’s potential. The first U.S. demonstration project, Dagher’s Aqua Ventus in Maine, isn’t expected to launch until 2024 at the earliest.

For most pilot projects around the world, said Musial, "they’re too young to even say what we’ve learned."

Newsom signed the California offshore wind bill into law despite years of resistance from the U.S. military, which has generally opposed the technology on the grounds that it could interfere with training exercises in Southern and central California waters.

Under President Biden, the Defense Department has sought to broker compromise with offshore wind proponents: In May, the administration announced that up to 3 GW of offshore wind could likely be developed in areas off central California as part of an initial 4.6 GW along the state’s entire coast — enough to power about 1.6 million homes.

"This is an essential and complementary clean energy source that produces power during the day and in the evening when solar generation is down," said Adam Stern, the group’s executive director.

California’s energy officials will decide how much offshore wind energy the state needs in a strategic plan required under the new law. Due next year, the plan is set to detail how much electricity should come from offshore turbines, how the state would go about permitting them, and what upgrades would be needed for the grid and at ports.

A similar planning process was laid out in Oregon, through a law signed by its own Democratic governor, Kate Brown, in June. Up to 3 GW of production could result from that law.

Those new targets on the West Coast will add to Maine’s longstanding goal of 5 GW by 2030. Similar proposals are also bubbling in Hawaii.

Internationally, the pipeline of floating projects has boomed in recent years, particularly in Asia. In 2019, 7.6 GW of floating wind designs were in development. A year later, that number had tripled, according to the U.S. Energy Department.

Conservationists generally welcome the prospect of a new renewable industry in the United States. But they’re only beginning to research how it might affect wildlife.

Francine Kershaw, a staff scientist on marine mammals at the Natural Resources Defense Council, is among the researchers trying to get a handle on the risks.

The chief ecological threat so far appears to be caused by the mooring cables, she said. If the cables become wrapped up in fishing nets, or other marine debris, they might end up ensnaring whales or other mammals.

Construction noise or the sheer presence of the turbines might disrupt fish and other wildlife as well, though possibly less than for other turbine designs, noted Kershaw.

"We need to be proactively thinking about the risks," she said.

"While we won’t necessarily know if they exist or not until development moves forward, we do think there are solutions to them. We can do this responsibly," Kershaw added.

‘A milestone and landmark’

A year after the law was enacted, a new Republican governor took office, Paul LePage, who issued a temporary moratorium on new onshore wind farms and took a broadly skeptical view of renewable energy sources amid concerns over impacts to electricity bills.

Utility regulators began to reconsider the terms of a power purchase agreement struck with the developers of the Aqua Ventus pilot, raising the prospect of its failure.

The current Democratic governor, Janet Mills, has since reaffirmed Aqua Ventus’ original contract. But consultancy Wood Mackenzie has predicted that floating projects won’t go up in Maine, at full scale, until sometime in the early to mid 2030s.

Many energy scientists like Musial say California will be the chief proving ground for a full-scale industry of floating turbines, given its electricity needs and national prominence.

Regulators at the Interior Department’s Bureau of Ocean Energy Management, he pointed out, have already started reviewing coastal areas in California for potential development.

Last week’s law, he said, "is definitely a milestone and a landmark for the technology."