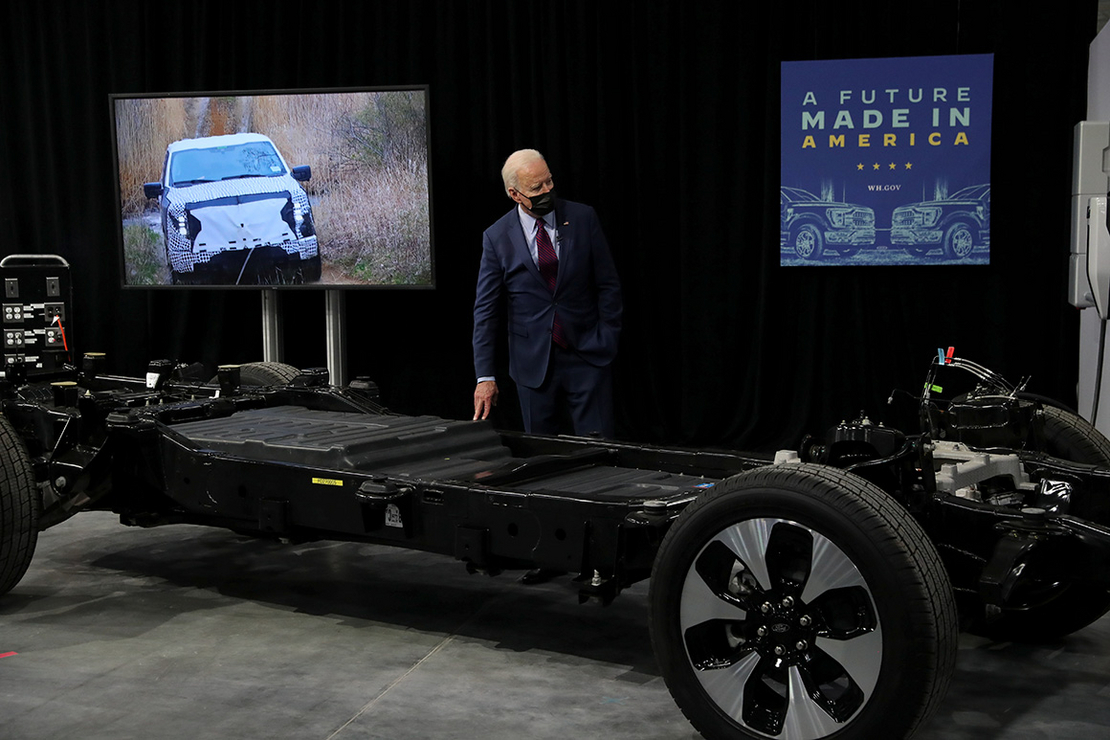 The long-awaited moves will usher in one of the nation’s strongest-ever climate regulations and target 50% of all vehicles sold by 2030 to be electric. Administration officials lauded the plan as a “paradigm shift.”

Some climate experts, however, said the policies fall short of what is needed to stave off catastrophic warming, and critics described Biden’s efforts as incomparable to the stronger actions of Europe and other countries.

The first prong of the administration’s plan aims to restore former President Obama’s greenhouse gas and fuel economy standards for light-duty vehicles, which were rolled back by former President Trump. The proposed rule, which is jointly set by EPA and a division within the Transportation Department, would incrementally ratchet up fuel efficiency requirements through model year 2026.

The president will also sign an executive order tomorrow, flanked by auto industry officials and union representatives, setting a target by which half of all car sales would be electric models within nine years. Eligible vehicles include electric, plug-in hybrid, and battery and fuel cell EVs.

The order will also direct federal agencies to begin drafting fuel efficiency standards for cars made after 2026.

Those new tailpipe rules will be crucial to meeting Biden’s goal of achieving net-zero emissions by 2050, experts said. Transportation is the country’s largest source of greenhouse gases, and cars account for the bulk of that carbon pollution.

General Motors Co., Ford Motor Co. and Stellantis NV, the company formerly known as Fiat Chrysler, praised Biden’s plan to sign the executive order, but stopped short of offering a firm commitment to hit the 50% EV target. The companies said they have a “shared aspiration to achieve sales of 40-50% of annual U.S. volumes of electric vehicles.”

“Our recent product, technology, and investment announcements highlight our collective commitment to be leaders in the U.S. transition to electric vehicles,” the companies said in a joint statement.

Under Obama, auto companies were required to raise fuel economy 5% each year through 2026. But Trump reduced that rate to 1.5% annually. Trump also repealed California’s legal authority to set its own standards, which the Biden administration is working to restore.

In 2019, five car companies — Ford, BMW, Honda Motor Co. Ltd., Volkswagen AG and Volvo — broke with competitors and reached a deal with California to increase miles per gallon by 3.7% a year.

Biden’s proposed rule would apply the California framework for model year 2023 and increase mileage standards to 5% in 2025 and at least 5% in 2026.

Paul Bledsoe, a strategic adviser for the Progressive Policy Institute, said the proposed rule is “aggressive.”

“But more broadly, the administration is trying to provide market incentives for the automakers to switch their fleets toward electric vehicles,” said Bledsoe, who served as a Department of Energy consultant under Obama and worked on climate change in the Clinton administration.

“Regulations are just a backstop to what should be an attempt to transform the entire industry through consumer demand and technological progress.”

But Dan Sperling, a member of the California Air Resources Board, said the stringency of the standards is insufficient to motivate car companies to scale up their sales of EVs.

“This is a sideshow to the transition to electric vehicles,” he said. “Other countries have far more stringent standards and far more aggressive commitments to EVs, and that includes Europe and China.”

The European Union has proposed banning the sale of gasoline engines by 2035, which is a necessary step to stave off catastrophic warming, according to an International Energy Agency report released earlier this year (Climatewire, May 18).

California and Massachusetts have also committed to ending the sale of gas-powered vehicles by 2035, and at least 11 other states are considering it.

“The administration is going to make this announcement as if this is some big sign of climate progress,” said Holly Burke, communications director for Evergreen Action.

Under current federal policy, a Rhodium Group analysis forecasts that EV sales would reach 11% to 19% of new car purchases by 2026.

“And what’s frustrating is that [the benchmarks are] way below where they need to be — and way less ambitious than it seems like they easily could be,” Burke said.

Biden has made EVs a cornerstone of his climate agenda. But he’s offered few hard promises about how he wants to reshape transportation.

He campaigned on specific targets for environmental justice, the electricity sector, buildings and reaching net-zero emissions across the entire economy. In office, he’s set even stronger benchmarks for nationwide decarbonization.

But his transportation goals remain harder to pin down — which is the opposite of how it should be, environmentalists say. The president has more power over transportation emissions than almost any other sector.

“Of the things Biden could do on climate through his existing executive authority, cars are one of the places he could move the needle the most,” Burke said.

Biden’s car rulemaking coincides with trouble for his EV agenda in Congress.

Biden promised to build 500,000 EV charging stations, but the White House started downplaying that commitment after money was cut from the bipartisan infrastructure deal.

The spending package is expected to provide $7.5 billion for EV chargers. That’s half of what the administration had planned for, though some officials think it’s still enough to hit Biden’s charger goal.