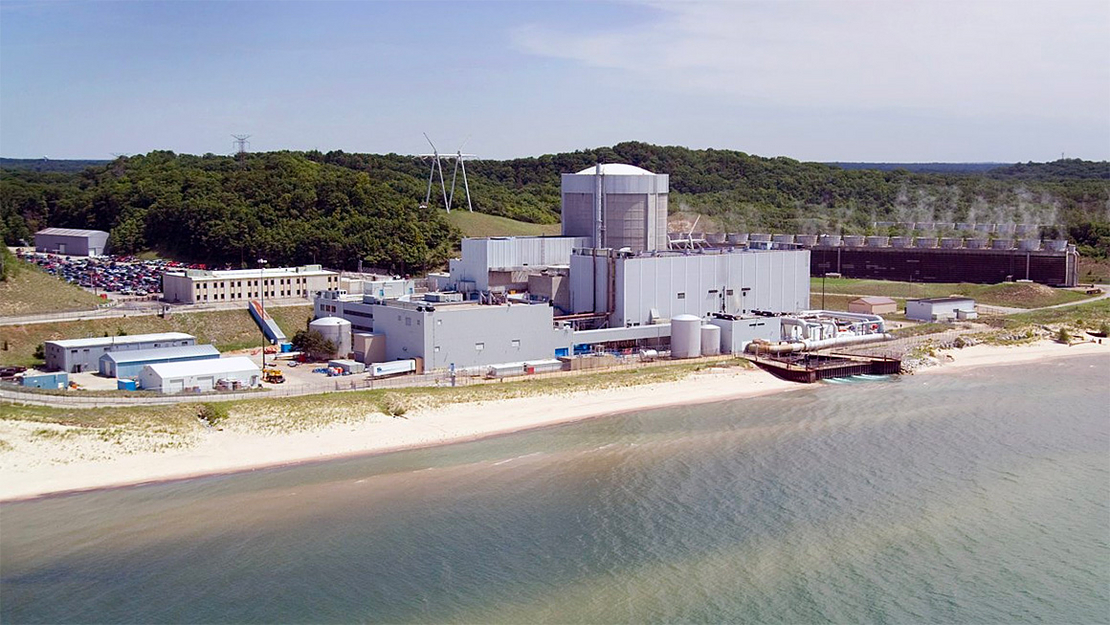 The Biden administration’s $6 billion effort to keep struggling nuclear plants operating is facing a barrier in Michigan and California.

A top energy executive yesterday confirmed that one of the first plants poised to qualify for financial support under the Energy Department’s newly unveiled lifeline — Michigan’s Palisades plant — remains on schedule to close May 31, throwing the Midwestern state’s climate goals into question.

Leo Denault, CEO of Entergy Corp., owner of the Palisades plant, told security analysts yesterday that a buyer who succeeded in acquiring the generator would also bear refueling costs and other expenses.

“We will work with any qualified party,” he said. But he added, “I do want to be very clear. Entergy is exiting the merchant nuclear business. The plant will have to stop operating in May. We’ll be out of fuel.”

His comments echoed those of Patrick Dillon, executive vice president of the Utility Workers Union of America, AFL-CIO, who told E&E News that “we’re in the 24th hour, we needed a decision yesterday.”

About 160 members of the union currently work at the Palisades facility. “I’m not going to say it’s high on the likelihood scale from our perspective” that the plant will continue operating beyond May, he added.

Dillon said he hoped Palisades would stay open, but workers there have been preparing the 800-megawatt facility for closure for months. “I think it’s a stretch to think that a purchaser is going to come in at this late date and continue the operation of the plant,” he said.

The last-minute attempt to retain the plants reflects the importance of the 93 existing U.S. nuclear reactors to President Joe Biden’s plans to decarbonize the power sector by 2035. Because nuclear power doesn’t produce carbon emissions, there are concerns that reactor closures would inevitably lead to more fossil fuel generation.

In the program’s first phase, grants are restricted to plants that had publicly announced they would close down prior to Sept 30, 2026, a threshold met by just three plants, including Palisades and two other reactors at the Diablo Canyon site between San Jose, Calif., and Los Angeles (Energywire, April 20).

Pacific Gas and Electric Co., the Diablo Canyon owner, has also said the DOE offer does not change its intention to close the California facility. Diablo Canyon’s reactors 1 and 2 have planned closing dates of November 2024 and August 2025, respectively.

In the grants announcement, DOE said it would channel up to $1.2 billion a year through fiscal 2026, or $6 billion in all, to financially failing nuclear plants that met DOE conditions. The funds were provided in the Infrastructure Investment and Jobs Act.

A spokesperson for DOE said yesterday they were unable to speak about the unique challenges and closure decisions facing various nuclear plants, nor could they provide a precise number of struggling plants potentially eligible for financial assistance.

“However, it’s very clear that there are multiple reactors facing significant financial pressures,” said the spokesperson. “Data show that closing nuclear power plants results in an increase in air pollutants and carbon emissions because this carbon-free generation is often replaced at least in part by fossil fuel plants.”

Without the Palisades reactor, Michigan faces a steeper path to Democratic Gov. Gretchen Whitmer’s goal of reducing greenhouse gas emissions by more than half by 2030 from a 2005 starting point and achieving carbon neutrality across the state’s economy by 2050. Palisades currently supplies 20 percent of the state’s “firm,” around-the-clock, carbon-free power.

Experts have debated whether Consumers Energy, the Jackson, Mich., utility that buys Palisade’s power, will be able to make good on its plan to offset the nuclear plant generation largely through a massive deployment of 8,000 MW of solar power by 2040.

Bringing on enough new solar generation to take the place of fossil fuels and nuclear plants is “aspirational,” said Todd Allen, chair of the nuclear engineering department at the University of Michigan. “I think it’s going to be a hard lift. There are community acceptance issues to large solar and wind farms,” Allen added.

“You’re replacing Palisades with natural gas in the short term,” he added. “If the goal is to minimize carbon, that’s not what we’re doing.”

James Gignac, senior Midwest energy analyst for the Union of Concerned Scientists, agreed that proposals for new wind farms have run into opposition in parts of Michigan, but he is optimistic that the solar build-out can and will happen.

“Consumers Energy has a very large service territory. The projections and analysis I’ve seen show there is plenty of acreage available. What is going to be crucial is the company and state policymakers improving [renewable energy] siting guidelines and working with landowners and local communities to talk about the benefits of hosting solar installations,” Gignac added.

Whitmer’s office said this week the governor has had “numerous conversations” with DOE, Entergy, potential owners and power purchasers, and the plant’s workers on preventing the plant’s early closure. There were no indications yesterday the search was succeeding.

“It’s very late in the game,” said Allen. He joined a list of nuclear scientists who appealed to Whitmer in February to try to keep the plant going.

Whether other nuclear plants slip into financial quicksand depends on future prices of competing natural gas and renewable generation in the parts of the U.S. with competitive power markets, a Congressional Research Service report noted this year.

Nuclear power has been under financial pressure for years, as other fuels have gotten cheaper. In 2016, for instance, prices for natural-gas-fired generation and renewables hit new lows. In the PJM Interconnection market serving 13 eastern and Midwest states and the District of Columbia, a significant proportion of nuclear plants did not cover costs that year, the system’s market monitor, Monitoring Analytics, reported.

Last year, power prices moved up sharply across the country, “including a near-doubling in the Midcontinent region and a 37 percent increase in California from the previous year. A continuation of this trend could ease future economic pressure on nuclear power plants in regions with market-based rates,” the CRS report said.

The closure of one nuclear plant can be significant in states like Michigan, which receives about a third of its electricity from nuclear power. The Palisades plant is one of three in the state, the other two being American Electric Power’s Donald C. Cook plant and DTE Energy’s Fermi plant in Monroe County.

In the California case, postponing the Diablo Canyon plant’s retirement until 2035 would reduce the state’s power sector emissions by more than 10 percent below 2017, researchers at Stanford University and the Massachusetts Institute of Technology have estimated.

Palisades’ single reactor “produces as much greenhouse gas free energy in a year as does all the wind and solar capacity in Michigan,” said a February letter from nuclear advocates to Whitmer.

“Initially there could be a slight increase in [greenhouse gas] emissions,” said Gignac.

“We don’t expect that new gas plants will be built as a result” of the Palisades shutdown, he added. “By building out wind, solar, and batteries for energy storage more aggressively, Michigan can meet 100 percent of its electricity consumption with renewable energy by 2035, even with high electrification” of transportation and building heating, a UCS report predicted this month.

However, a sharp acceleration of U.S. solar power installations have been questioned in recent months by the industry, which says it is in the most “serious crisis” in history and that growth is threatened by a potential Commerce Department probe on tariffs (Energywire, April 6).  The Solar Energy Industries Association forecast this week that if Commerce does restrict Southeast Asia imports, solar installations for 2022 and 2023 would fall by 46 percent.

Prices for solar installations have risen sharply this year, reflecting a “pervasive and unabating headwinds renewable developers are encountering on nearly every front of project development,” the research firm LevelTen Energy reported this month.