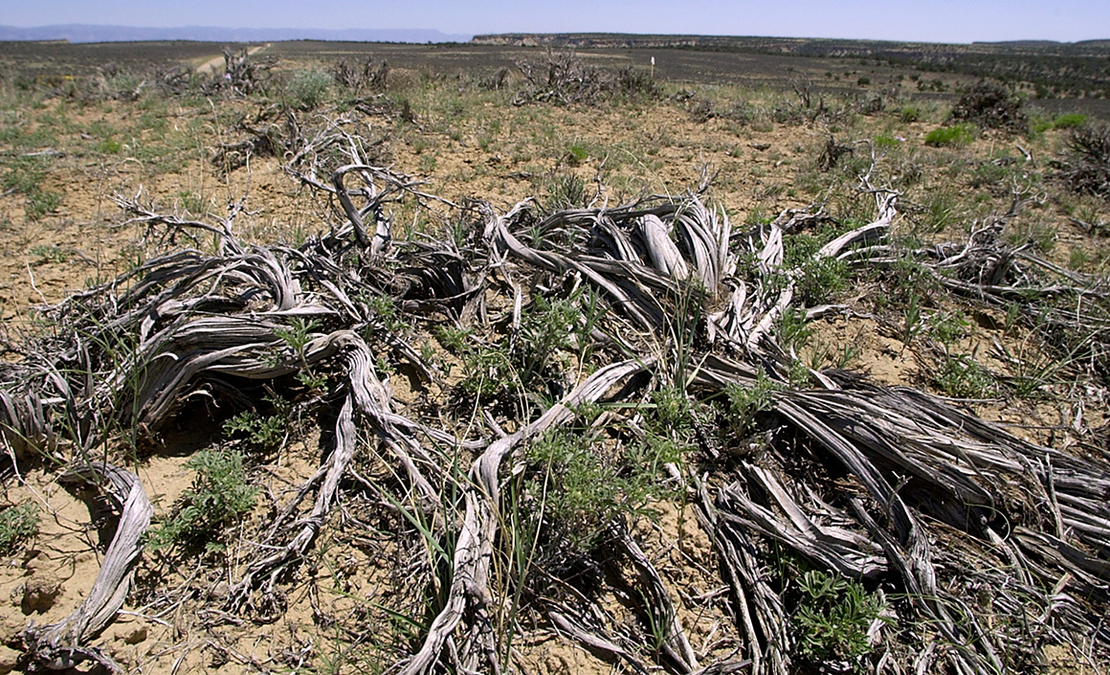 A dying sagebrush plant lies in its dry environment brought on by drought in 2004, west of Price, Utah. Douglas C. Pizac/AP Photo

A majority of employees who responded to a Bureau of Land Management internal survey say that the bureau needs to do more to address the impacts of climate change.

The results of the “Climate Change Listening Sessions,” outlined in an executive summary to BLM staffers, captured more than 3,200 comments submitted by about 1,500 employees during 15 listening sessions last year.

BLM Deputy Director of Operations Mike Nedd sent the executive summary to staffers in an email today that expressed his thanks to those who answered survey questions or attended one of the sessions. All the comments from staffers were anonymous.

A total of 68 percent responded to the question, “How much should BLM be focusing its resources on the resolution of Climate Change issues” by answering: “More than we currently are.”

Most responded, out of a list of climate change approaches, that they would prioritize in the next three years resolving “policy conflicts and/or develop new policy” on the issue. They also want the bureau to give more weight to “equity, environmental justice, landscape resilience, connectivity, ecosystem services” and greenhouse gas emissions “when making allocation and land management decisions.”

The employees said they want BLM to recruit “and train” new staff with the “knowledge, skills, and abilities needed to meet these challenges,” the survey said.

The survey comes as the Biden administration has attempted to pivot BLM and other federal government agencies away from the energy-first agenda of the Trump administration and into a renewed effort to address a warming climate, including stepping up efforts to permit renewable energy projects on federal lands.

The executive summary Nedd released today — also available to BLM employees via an online “dashboard” allowing them to have easy access to the information — listed some anonymous employee responses to a series of questions on climate change issues.

For example, one question asked what conditions land managers have observed “where you live or on the lands that you manage that you would attribute to climate change?”

One employee in BLM’s Montana-Dakotas office responded that the spread of invasive species, as well as the drying up of “riparian and wetland areas” and “changing wildlife behavior” could be attributed to climate change.

Another in the BLM Nevada office who grew up in Reno, and is now 52 years old, wrote that they “never had a ‘smoke day’ from fires burning in California” until the last five years, “when Reno was fully smoked out, with schools closed and air quality in the ‘hazardous’ range.” An employee in the BLM Colorado office wrote about diminished “stream and river flows, lowered lake, reservoir, and pond elevations, and reductions or the complete drying up of springs.”

Another question asked for input on “low hanging fruit” within each state, district or field office “that could have the biggest impacts on climate change.”

One employee in the Nevada office lobbied for more education of “staff, managers and especially decision makers of the importance” of trees and other vegetation in removing carbon from the air. “Take carbon storage or the loss thereof into consideration before authorizing large scale projects,” the person said.

Still another at BLM’s headquarters in Washington said: “I continue to be concerned that climate change is a political football and we as a staff have suffered years of whiplash with administration changes.” The employee asked policymakers how they can “craft/implement policies that can withstand political changes and still move forward on this issue.”

An employee in the Alaska office echoed this view: “Stop the Climate Change Science pendulum swing from administration to administration.”

Employees were also given the option to offer their own suggestions.

One employee from the BLM California office suggested designating lands that have been deemed significant carbon sinks, such as forest areas, as formal areas of critical environmental concern (ACECs), “and then identify key climate ACECs in each BLM state.”

Another in the Arizona office suggested BLM establish a program “with the purpose of planting native trees and shrubs on a large scale for carbon dioxide sequestration.”

The executive summary stated that BLM would share the information with “policy makers” in an effort to encourage the “development of local, state, and national climate action plans.”

But Nedd, in his email to staff today, encouraged employees to “dive into the report to learn what your colleagues had to say about climate change and the ideas and solutions for how we can address it.”

He wrote that he wanted to “keep these conversations going and encourage each other to get involved in the future development of local, state, and national climate action plans.”