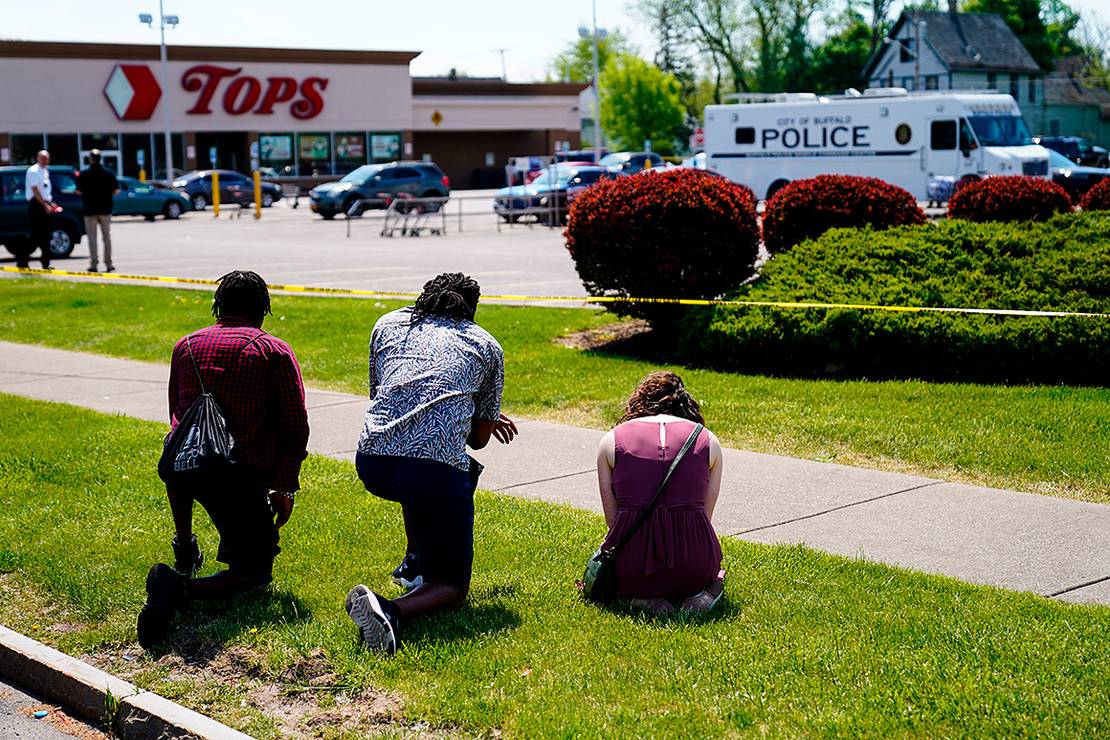 People pray yesterday outside the scene of Saturday's shooting at a supermarket in Buffalo, N.Y. The shooting is the latest example of something that's been part of U.S. history since the beginning: targeted racial violence. Matt Rourke/AP Photo

The 18-year old accused of killing 10 people in a Buffalo supermarket over the weekend left behind a racist manifesto that called for reclaiming environmentalism in the name of white nationalism.

The suspect’s 180-page manifesto — posted and reposted on the anonymous message board 4chan, along with images from the live-streamed mass shooting — invokes the racist conspiracy theory that the ruling class is using immigration to politically and culturally “replace” white people.

Embracing the label “eco-fascist,” the suspected mass shooter called on other white supremacists to view immigration as “environmental warfare.”

“Green nationalism is the only true nationalism,” the Buffalo suspect’s manifesto reads, echoing a line used by the white nationalist who in 2019 killed 51 people in Christchurch, New Zealand.

The reference to the Christchurch shooter’s manifesto demonstrates how tapping into environmental anxiety is becoming a favorite tactic for far-right extremists. The same green racism was invoked by the shooter who in 2019 killed 23 people at a Walmart in El Paso, Texas.

And experts have flagged the growing popularity of Ted Kaczynski, also known as the Unabomber, among white supremacists who are drawn to his hostility toward modern society.

The Buffalo suspect’s manifesto offers the latest example that “eco-fascism” is becoming an animating force among young far-right extremists.

“For too long we have allowed the left to co-opt the environmentalist movement to serve their own needs,” the Buffalo manifesto reads. “The left has controlled all discussion regarding environmental preservation whilst simultaneously presiding over the continued destruction of the natural environment itself through mass immigration and uncontrolled urbanization, whilst offering no true solution to either issue.”

The trend has been growing for years.

In 2019, when a white nationalist gunman killed 23 people in El Paso, he left behind a manifesto titled “The Inconvenient Truth,” blending environmentalism with white supremacy and claiming that dwindling resources justified racist violence.

“If we can get rid of enough people, then our way of life can become more sustainable,” the El Paso shooter wrote before shooting dozens of people at a Walmart (Greenwire, Aug. 5, 2019).

The El Paso shooter, like the Buffalo suspect, claimed inspiration from the 2019 mass shooting in Christchurch.

In his own manifesto, the Christchurch shooter claimed that he had passed through many political ideologies before finally landing on eco-fascism, arguing that climate change and immigration were aspects of the same process.

The Buffalo suspect, whom police have named as Payton Gendron, is accused of shooting 13 people. Eleven of the victims were Black. He has pleaded not guilty.

Police reportedly investigated the suspect for comments he made last year about considering a school shooting.