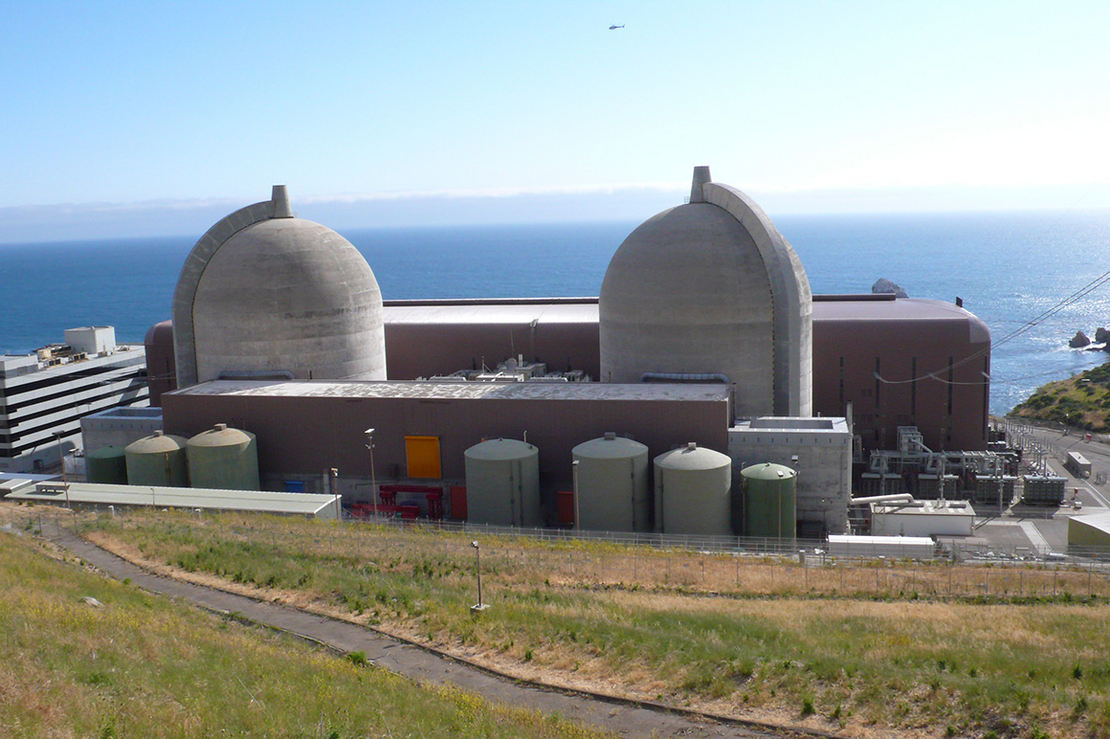 California political leaders are debating whether to keep the state’s final nuclear power plant open beyond 2025, a decision with repercussions for the state’s emissions, electricity mix and ability to prevent blackouts amid high demand in the years ahead.

But saving the Diablo Canyon Power Plant — near the Pacific Ocean in San Luis Obispo County — would require clearing numerous hurdles within just a few years.

The plant is scheduled to shutter one unit in 2024 and the second in 2025. The closures are part of a settlement agreement reached by plant operator Pacific Gas and Electric Co., environmental groups and local authorities.

Unwinding that agreement — even to keep the plant open a few more years — would require approval from the California Legislature and four state agencies. The U.S. Nuclear Regulatory Commission would need to issue an operating license renewal. And the plant would need to undergo safety upgrades, state officials have said.

“As California accelerates our efforts to bring renewable energy generation and storage online, the State is also focused on maintaining energy reliability in the face of increasingly frequent climate-change-driven events that threaten our current electrical system,” a Newsom spokesperson said in an email, declining to be identified by name. “Maintaining energy reliability may require the extension or renewal of permits of electric generating facilities currently planned for retirement.”

Recent decisions — including by the U.S. Supreme Court to limit federal regulatory authority and by Sen. Joe Manchin (D-W.Va.) to say he doesn’t support a climate bill — show why states may need to play a leading role if they want action on climate policy. Yet California and Diablo Canyon illustrate how challenging it can be to lower emissions while energy demand remains strong. Losing a carbon-free generating plant that serves as many as 3 million homes and businesses would require adding significant volumes of replacement electricity generation.

The California Public Utilities Commission last summer ordered PG&E, Southern California Edison Co. and San Diego Gas & Electric Co. combined to buy at least 2,500 megawatts of zero-emission electric generation resources, such as solar plus storage, or contracts with businesses that agree to cut their energy consumption. The order was aimed at replacing Diablo Canyon’s power. But the Covid-19 pandemic and supply chain glitches have delayed some of that coming online.

Uncertainty around Diablo Canyon also comes as California wrestles with how to keep its lights on in the coming years. The nation’s most populous state sees itself as a national leader on tackling climate change, with a mandate that its grid use 60 percent renewable sources by 2030.

Still, state energy agency projections have shown that extreme heat and other climate change impacts could trigger electricity blackouts in the early evening hours, after solar energy stops producing. The threat is the worst for the next five summers, particularly in September, recent state projections said.

This summer, peak demand could exceed available supplies by as much as 3,500 megawatts, state projections show. That would leave as many as 3.5 million homes without power (Climatewire, May 23).

Record-breaking heat in recent summers has driven up electricity demand. At the same time, the state’s historic drought, wildfires and supply chain glitches have made it tougher to get generation online. That includes bringing online battery storage and other green energy sources aimed at replacing the power from Diablo Canyon.

Newsom’s administration recently sought help from the federal Department of Energy on funding that might help keep Diablo Canyon open, through DOE’s Civil Nuclear Credit Program. The program has $6 billion for imperiled nuclear plants, allocated through the Infrastructure Investment and Jobs Act.

DOE last month extended the deadline for applying for the program to Sept. 6. The agency also tweaked some language on which plants qualify.

PG&E said it plans to apply for those funds.

“Given the recent amendments to the program guidance, as well as the governor has asked us to take steps to preserve Diablo as an option to support grid reliability, we do expect that we will apply for the funding, the Department of Energy funding, because it would reduce costs for our customers,” said Lynsey Paulo, a PG&E spokesperson.

“Any extension of Diablo would require future legislation as well as approvals by federal, state and local regulatory authorities,” she added.

She said that the utility will follow state and federal policy, which right now means “the plant will close when the current licenses expire in 2025.”

As questions about Diablo Canyon’s future swirled, DOE in late June altered language in its guidance for the Civil Nuclear Credit Program.

It changed an earlier requirement that a qualifying plant must participate in a “competitive electricity market” to access the funds. It changed the wording to say a plant can demonstrate that by showing the reactor “will receive a material amount of its total revenue from sources that are exposed to electricity market competition.”

The DOE guidance change came after Ana Matosantos, Cabinet secretary for Newsom, sent a letter in late May to Energy Secretary Jennifer Granholm asking for DOE to drop the requirement that a plant must participate in a “competitive electricity market” to access funds.

Newsom’s office said that “actions such as the DOE revised eligibility and extended deadline allow time for the Governor and Legislature to discuss the option” of an extension for the Diablo Canyon plant.

The NRC typically takes between 18 months and two years to issue a license extension, Jacopo Buongiorno, director of the Center for Advanced Nuclear Energy Systems at MIT, has said previously (Energywire, Nov. 10, 2021).

In a statement, PG&E said the plant remains safe.

“The Nuclear Regulatory Commission’s (NRC) latest annual assessment of the facility places Diablo Canyon among the highest-performing plants in the U.S. nuclear industry,” Suzanne Hosn, a PG&E spokesperson, said in an email. “This reflects the hard work and dedication of our co-workers and our commitment to meeting PG&E’s and the NRC’s high-performance standards, including for seismic safety.”

Diablo Canyon is slated to close for several reasons, including that its power prices in recent years have exceeded those of solar or even natural gas — before gas prices spiked this year.

California has a moratorium on new nuclear plants until a solution is found for radioactive waste. A battle is underway over dealing with the waste from the San Onofre Nuclear Generating Station located in north San Diego County. It closed in 2012 after a unit leaked, and plant operator Southern California Edison decided to retire the facility in 2013.

The California Legislature must weigh in because it voted in 2018 through S.B. 1090 to endorse the settlement to retire Diablo Canyon. There is no legislation in California right now proposing to keep the plant open beyond 2025.

Keeping Diablo Canyon open past 2025 would require safety inspections and expensive upgrades, according to David Weisman, legislative director with the Alliance for Nuclear Responsibility. The group was part of the settlement agreement on closing the plant.

Because Diablo Canyon is scheduled to shut, some safety upgrades haven’t happened. Those include enhancements to the alarm system in one of the unit’s control room, Weisman said.

“In other words, they’re patching it together,” Weisman said.

There also would be a worker shortage if Diablo Canyon were to remain open longer, he said, as the settlement agreement is releasing workers in tranches. Many plan to retire in 2023, Weisman said. Workers who remain received a large salary bonus, with many earning more than $200,000 annually, Weisman said, so keeping those workers on staff beyond 2025 would be costly.

In response, PG&E’s Hosn said, “While we plan for the operating licenses for Diablo Canyon’s Units 1 and 2 to end in 2024 and 2025, respectively, we remain strongly committed to the highest levels of safety, performance and security at the facility.”

PG&E said about 1,300 people currently work at the plant.

“It would take a substantial amount of work in order to reverse the current trajectory” toward closing the plant, said Per Peterson, a committee member. “It would be a relatively intensive effort on the part of the committee to examine any sort of scenario where relicensing work would be pursued.”

Committee members also said a decision on whether to keep Diablo Canyon open longer needs to be made soon, given the work it would involve.

The nuclear plant is scheduled to close, in part, because California plans to shutter all power facilities that use ocean water for cooling, known as “once-through cooling.”

Diablo Canyon has a permit from the California State Lands Commission to use ocean water. But that permit expires about the same time the plant’s federal license to operate expires, said Ralph Cavanagh, co-director of the energy program at Natural Resources Defense Council.

Diablo Canyon is also not an answer to the state’s reliability issues, he said.

Newsom recently signed a controversial measure that would delay the closure of natural gas plants and expedite energy generation projects in an effort to avoid blackouts over the next five summers. The legislation aims to beef up supply on the state’s electrical grid as it faces a potential shortfall in times of extreme heat.

“You can’t keep a nuclear plant on standby for emergency conditions,” Cavanagh said. The natural gas plants being kept online “are intended to operate a few hours a year, on extremely hot afternoons.”

Diablo Canyon, in contrast, he said, is designed to run 24 hours a day, with a specialized workforce.