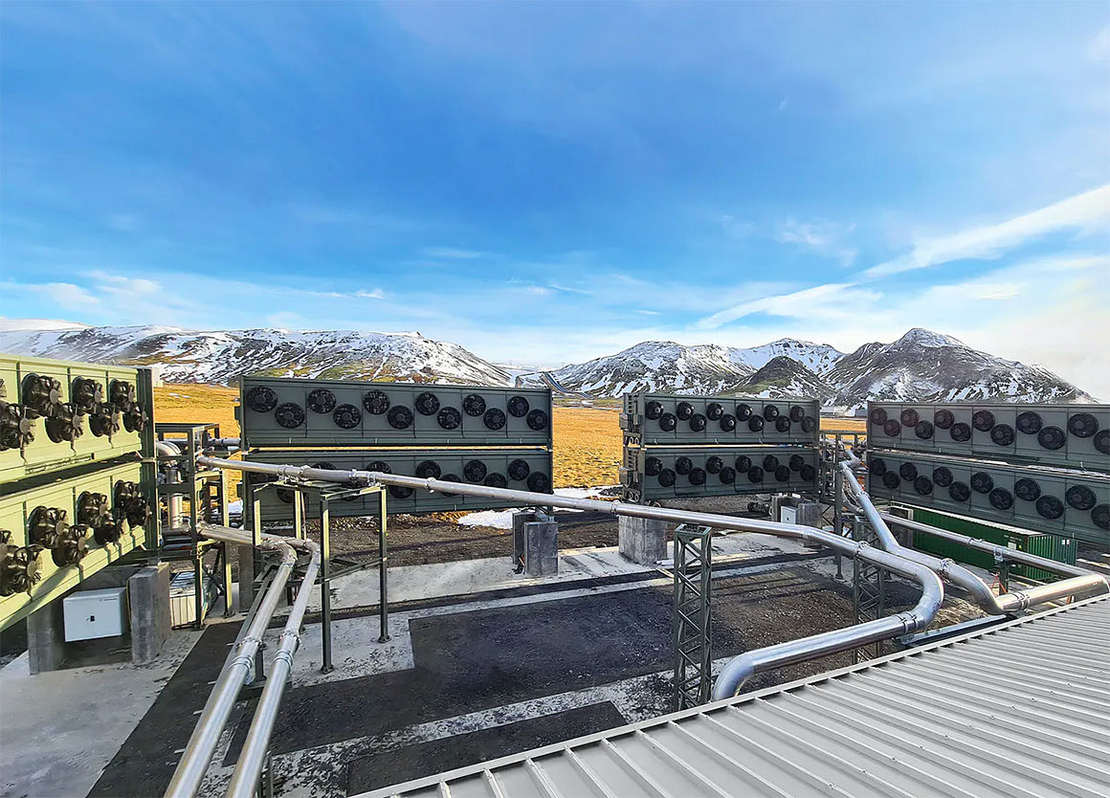 The world’s largest facility dedicated to removing carbon dioxide from the atmosphere is set to come online tomorrow in Iceland, a major milestone for the nascent direct air capture industry.

Constructed by the Swiss company Climeworks AG with support from Microsoft Corp., Swiss Re and other prominent corporate customers, the landmark facility is expected to pull 4,000 metric tons of carbon dioxide from the air annually and store it permanently underground. The plant is named “Orca,” which means “energy” in Icelandic, and is roughly 20 miles southeast of the capital, Reykjavík.

If it works as planned, the plant would increase the world’s direct air capture capacity by more than 40%, to 13,000 metric tons.

That is less than 1% of the annual emissions of a single coal-fired power plant, according to EPA emissions data and an International Energy Agency report on the technology. The Intergovernmental Panel on Climate Change has estimated that, to avoid the worst impacts of global warming, the world needs to remove 100 billion to 1 trillion tons of carbon from the atmosphere by the end of the century.

Energy experts say Orca represents the promise of DAC, a category of technologies that include large fans and artificial trees that someday could complement efforts to reduce the release of greenhouse gases.

“We need to turn this into a Starbucks, circa 1999, where you see one on every corner,” said Peter Psarras, a professor in chemical and biomolecular engineering at the University of Pennsylvania. “I think this is the future we might see in the next decade.”

Constructed near the Hellisheidi geothermal power plant, Iceland’s largest geothermal facility, Orca will run off of emissions-free electricity and heat.

The Climeworks plant is composed of eight so-called air collection containers, which are stacked two high and arranged like a bracket around a central processing building. The containers have fans on one side, intake vents on the other and carbon-capturing filters in between. They are connected to the building by a series of steel pipes.

When a container’s reusable filters are full of carbon, the intake vents close and the container is heated to between 80 and 100 degrees Celsius (176-212 degrees Fahrenheit), the temperature needed to remove carbon from the filters. The pure carbon dioxide would then be mixed with water and injected thousands of feet underground into basalt rock formations. The carbonated water will form new rock in less than two years, according to Climeworks.

The modular design “demonstrates that Climeworks is able to scale carbon dioxide removal capacity by a factor of around 80 in 3-4 years,” the company says on its website. “These developments will lead to several million tons of direct air capture and storage capacity by the end of this decade.”

Vastly larger DAC facilities are on the horizon. Carbon Engineering Ltd., a Canadian firm, is planning two plants that could each capture up to 1 million metric tons of carbon dioxide annually. A 100-acre facility is expected to break ground in the Permian Basin next year. The other, slated for construction in Scotland, could begin operations in 2026.

By comparison, it would take over 1.2 million acres of U.S. forestland to sequester an equivalent amount of carbon over the same time period, EPA data shows.

Other emission-cutting technologies are also scaling up.

Charm Industrial, a San Francisco-based company, announced last week that it had signed a deal with e-commerce platform Shopify to permanently sequester the equivalent of 3,000 tons of carbon dioxide by 2023. Charm, which prevents emissions by turning biomass into a liquid that can be injected underground, has already stored the equivalent of 1,000 tons of carbon for Shopify.

“DAC is just one option among many for negative emissions,” said Ryan Hanna, a scientist at the University of California, San Diego’s Center for Energy Research. “They can work in concert.”

The main challenge for Climeworks, Carbon Engineering and Charm is that no one knows how much demand there will be for their technologies, he said. That will largely depend on how quickly consumers, companies and countries begin to zero out their emissions. The slower that occurs, the more need there will be for negative emissions facilities.

While many scientists and investors think DAC shows great promise for carbon removal, it isn’t yet clear if it “is going to be the most cost-effective way to remove CO2 from the atmosphere in the long run,” Hanna said.

“What we really need in the short run is just knowledge,” he said. “We have this massive technology option, but it’s behind a curtain.”

Correction: A previous version of this story misidentified the company working with Charm Industrial on carbon sequestration.