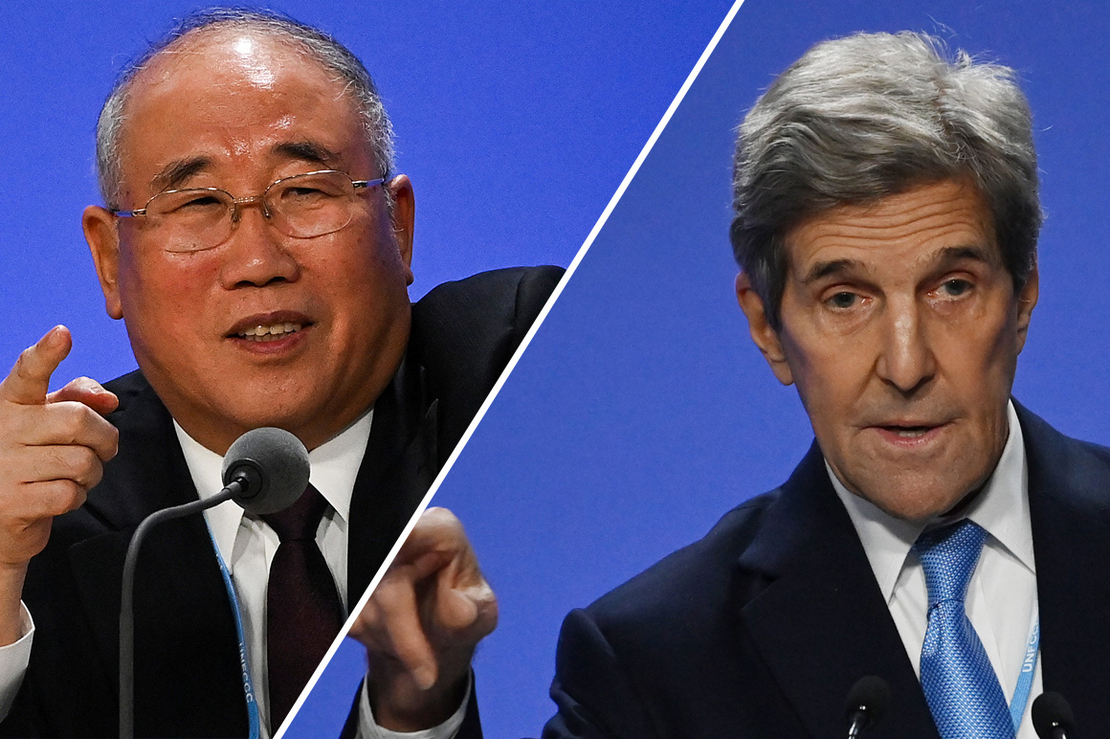 GLASGOW, Scotland — The United States came to the global climate talks with an overriding message: "We’re back and ready to lead again."

That was the theme of President Biden’s address at the opening of this conference, known as COP 26, in which he said the U.S. was “leading by the power of our example.”

Former President Obama echoed that this week. So have Democratic lawmakers, who are anxious to assure delegates here that Biden’s climate agenda won’t hit a brick wall in Congress.

The message of renewed U.S. leadership permeated announcements by Biden’s Cabinet members in side rooms, where they expounded on EPA’s methane rules, the Interior Department’s wind energy strategy and the Federal Aviation Administration’s new climate plan.

Kerry described the agreement as a turning point — one forged by the world’s two largest economies and emitters — to raise climate ambition from one hemisphere to the other.

Others saw it as a press release.

“They have a long way to go if they want to be claiming leadership,” said Saleem Huq, director of the Bangladesh-based International Centre for Climate Change and Development. “They left leadership position a long time ago, after Paris. They don’t get to become a leader again that easily.”

Kerry and Xie were the lead architects of a 2014 agreement by the world’s two major superpowers that turned the tide in favor of a deal on climate change in Paris the following year. This week’s deal seemed like an attempt to follow the same formula.

But where the 2014 agreement was an inflection point in the U.N. process, Wednesday’s doesn’t appear to have moved the dial at all. Negotiations here remain fraught, and the outcome of a final resolution remains uncertain hours before the talks are scheduled to conclude.

Mohamed Adow, director of Power Shift Africa, said the U.S.-China deal seemed to be more about relations between the two countries than about the success of COP 26.

“When it comes to climate, and particularly for what is the agenda in Glasgow, none of the issues have actually been advanced,” he said. “Of course, it helps with the relationships inside the room, but not enough to actually help deliver the outcomes we’re looking for.”

Emotions are running high around persistent disagreements over support for poor countries — with the U.S. often perceived as more of a stumbling block than a leader.

Huq and other advocates from countries that will experience particularly harsh futures in a warming world — Bangladesh’s capital city of Dhaka is threatened with inundation from sea-level rise — are determined not to leave Glasgow without securing concrete assistance.

They want these talks to produce a new fund to help those who will lose homes and livelihoods to climate impacts that are now irreversible. Huq said the details of how the money would be provided can be discussed later. Vulnerable countries just want a process to be initiated in the final Glasgow text, which they hope will finally give loss and damage a meaningful place in the architecture of the Paris Agreement.

China, which casts itself as partner and protector for other developing countries, backs the scheme. It also supports the idea that wealthy nations should at least double the amount of money they have promised to give developing countries for adaptation projects.

But the wealthy world is digging in — particularly the U.S.

The U.S. has acknowledged blocking language put forward by the Group of 77 developing countries that would create a loss and damage fund. Huq said the U.S. seems to be fearful that such a fund would open the door to liability.

The frustration among endangered nations was palpable this afternoon as delegates gathered in the plenary hall to gage progress.

“[Small Island Developing States] cannot always be the ones who are asked to compromise in the interest of consensus,” said Lia Nicholson, lead negotiator for the Alliance of Small Island States (AOSIS). “It’s not just words we’re conceding, it’s our lives, livelihoods and our future. We will not leave Glasgow without seeing that our calls are addressed.”

Scientists say the world must limit post-industrial warming to 1.5 degrees Celsius if it is to avoid the worst climate impacts — especially for vulnerable countries like islands. The U.S. has embraced that goal, and has also signaled support for proposals that would accelerate the pace at which countries would put forward new Paris pledges. China has strenuously opposed them.

But Fran Fuller, an adviser to the AOSIS chair, called U.S. opposition on loss and damage “extremely challenging.”

“It is already an established scientific fact that the largest historical emitters bear the biggest responsibility for this crisis,” she said in an email to E&E News. “The US acknowledges this. So how then does their opposition to a funding facility for Loss and Damage impacts already being felt by the most climate vulnerable, square with their dearly held principles of truth and justice?”

Mamadou Honadia, Burkina Faso’s former lead negotiator and a former chair of the African group of negotiators, said the U.S. should be sensitive to the needs of the least developed nations, like his own. That’s especially needed given how the U.S. shook global trust in its credibility by withdrawing from the Paris Agreement under former President Trump.

Instead, he said the U.S. is holding to its red lines in these negotiations, especially on finance.

“The U.S. as a party who resigned and came back in the system, to me, the position should not be so strong like that,” he said. The U.S. “should be flexible, and maybe in the next two, three years, being able to, you know, to express some strong positions on what they don’t like, and so on and so forth.”

Honadia said the U.S. message here has been inconsistent. He said he attended a side event with Kerry earlier in the week in which Kerry touted a new U.S. AID program to help developing countries adapt to warming. He hoped that signaled a new commitment to climate aid. Instead, he saw the U.S. fighting to keep increased commitments of climate aid out of the COP text.

“So … at the political level, we see a sort of signal, and at the expert level is another, another sound,” he said. “So, we don’t see any coherence in the whole delegation of the U.S.”