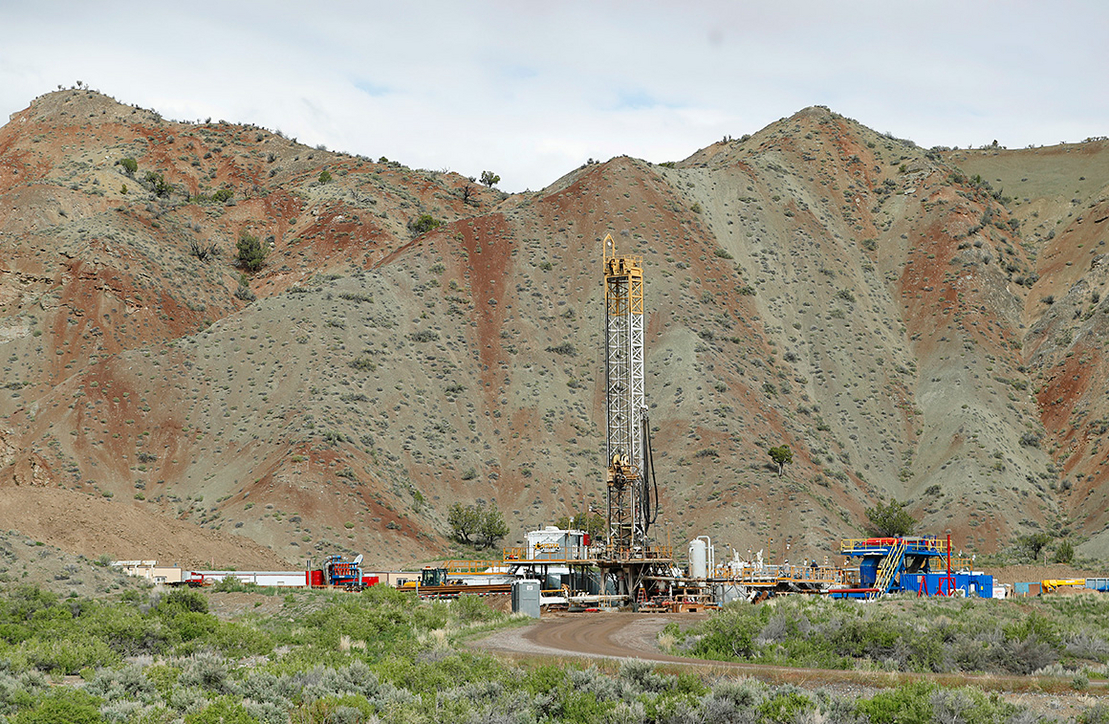 The Democrats’ massive climate deal is catching heat from environmental activists for guaranteeing years of oil and gas leasing on federal lands and off the nation’s coast.

But is the oil trade-off such a bad compromise in the larger fight to reduce emissions and slow climate change?

While the “Inflation Reduction Act” brokered by pro-oil Democratic Sen. Joe Manchin of West Virginia and Chuck Schumer, the Democratic Senate majority leader from New York, would entrench oil’s footprint on public lands and waters for years, some climate experts say the benefits of the $369 billion commitment to expand clean energy and electric vehicles, the emergent hydrogen space, and nuclear energy far outweigh the downside of more fossil fuel leasing.

That’s partly because leasing on federal lands is a preliminary step that doesn’t guarantee companies will drill for oil and gas, or that those hydrocarbons will be burned up in cars, planes and power plants contributing to global warming.

“We find that the oil and gas leasing provisions have a negligible impact on emissions and are far outweighed by the emissions reductions in clean energy, clean vehicle, and energy efficiency deployment,” Ben King, Rhodium Group’s associate director, said in a statement.

Samantha Gross, energy security and climate initiative director at the Brookings Institution, said the trade-offs in the bill have been overstated. The legislation is primarily focused on reducing society’s demand for oil by offering alternatives — the critical shift that needs to take place to truly reduce emissions — while the lease sales it would mandate represent an extension of the status quo.

“This isn’t like some giant giveaway of a completely new size and scope,” she said.

The controversial provisions would force the administration to hold oil and gas lease sales if it wants to also lease for renewable energy, like President Joe Biden’s push for offshore wind. Additionally, the bill would reinstate an oil sale vacated last year by a federal judge and order the administration to hold three other offshore oil sales that it had canceled, kneecapping the Interior Department’s ability to thwart new offshore leasing in a five-year oil and gas plan currently under consideration.

The bill also includes reform measures, such as increasing oil and gas royalty payments, which oil and gas reform activists have long pushed for.

Hailed as a great compromise by many Democrats, the bill passed the Senate on a 50-50 party-line split Sunday, with the tie broken by a vote from Vice President Kamala Harris (E&E Daily, Aug. 7). It now heads to the House, where the Democratic majority is expected to pass the bill and send it to the president for his signature.

“This bill should not be considered a climate victory,” Jim Walsh, policy director for Food & Water Watch, said in a statement last week. Erich Pica, president of Friends of the Earth, praised the renewable aspects of the bill but also said in a statement that “communities and the climate continue to be sacrificed to Sen. Manchin’s fossil fuel demands.”

Jean Su, energy justice program director at the Center for Biological Diversity, said the administration should now declare a climate emergency, which would allow Biden to “confront the deadly fossil fuel industry head on.”

“The bill’s commitment to massive federal oil and gas expansion is dangerously at odds with scientific reality,” she said in an emailed statement. “Biden can and must do more.”

Many climate experts have supported the bill and pushed back on the green opposition. They reason that the giveaways to oil and gas aren’t as significant as the climate benefits.

Brian Prest, an economist at Resources for the Future, in a tweet thread called the bill a “middle ground” approach. Prest’s recent research in JAERE, a natural resources research publication from the University of Chicago Press, suggested that raising oil and gas royalties to 18.75 percent — the bill settled at a lower 16.33 percent minimum rate — would increase federal revenues by $1 billion to $2 billion, though achieve little in terms of emissions cuts.

Also on the emissions front, a Rhodium Group assessment of the final bill was favorable, noting that its provisions are capable of driving a reduction in greenhouse gases of 31 to 44 percent below 2005 levels by 2030, compared with 24 to 35 percent under current policy.

Gross, from Brookings, said those accomplishments are more valuable in the long run than hindering oil production on federal lands.

In fact, short-circuiting the federal oil and gas supply in hopes of pushing consumers away from fossil fuel use by reducing its availability is a “dangerous game” that could backfire, she warned.

Cutting supply before the U.S. has first cut its demand would mean a need for more imports of those products, Gross said. That could both increase energy costs and potentially increase emissions from the carbon footprint of shipping to bring the oil to the U.S. and from the production in countries with lower environmental standards. The shift would also force the U.S. to rely on foreign governments that aren’t always allies for some of its energy supply, she said.

“I’m not for producing fossil fuels forever,” she said. “I just don’t want to end up in a position where the overall global emissions level has gone up somewhat because of our fossil fuel policies.”

The climate community isn’t the only one divided on the bill’s impacts — oil and gas interests have also had a mixed response.

The bill’s most significant oil and gas provisions are likely the historic reform measures that would help pay for it, including the first increase in minimum royalties on onshore federal production of oil and natural gas since 1920, a new fee on methane pollution, and royalties levied on most vented and flared methane.

Those measures have inspired their own pushback from Republican critics of the bill, who say they threaten American energy industries without alleviating inflation.

“The time is now for America’s energy producers to stand up and be very clear about how these destructive policies will raise prices, destroy jobs, and make us less secure,” Sen. John Barrasso (R-Wyo.), chair of the Senate Republican Conference, said in a statement.

Some in the oil sector have concurred, like the Louisiana Oil and Gas Association, a trade organization.

“One positive does not outweigh a plethora of negatives,” the organization’s president, Mike Moncla, said in an email. “Yes, this bill does guarantee another 60 million acres to be leased for oil and gas production in the Gulf of Mexico. But the rest of it is merely par for the course for this administration’s war on the oil and gas industry.”

But not all of the oil and gas sector is rallying against the bill. Executives from some of the country’s largest oil and gas producers, including Exxon Mobil Corp. and Occidental Petroleum Corp., have deemed it a policy they can live with.

“At least the agreement recognizes that natural gas and oil are an important part of the energy transition and are going to be here for decades. So that’s a positive,” ConocoPhillips’ CEO Ryan Lance said last week in a call with analysts (Energywire, Aug. 5).

Andrew Gillick, energy sector strategist at Enverus, said he’s been pushing energy allies currently on the fence to see a similar net positive — particularly with the side deal secured by Manchin for Democrats to support changes to permitting regulations that could lead to pipelines, liquefied natural gas and other fossil fuel projects moving more quickly through the federal bureaucracy.

“Anything positive out of Washington, especially with this administration, towards the oil and gas sector is a huge win,” he said.

The bill is also a potential acknowledgment that “the need for hydrocarbons in our energy economy are still there,” something that may not have been possible to pull from the political left before the energy price shocks following the Russian war in Ukraine earlier this year, he said.

“Six months ago, if you told me that this bill was gonna pass, I would have been surprised,” Gillick said.

Scott Nance, a research analyst with Wood Mackenzie, said Biden administration policies like freezing oil and gas leasing probably haven’t had much of a negative effect on the oil sector’s activity on public lands, while the climate bill does offer some stability for the sector, because it removes the uncertainty about what the White House will do.

“I don’t think it’s going to radically change the environment,” Nance said. “But the addition of that stability is going to be a minor benefit.”

Meanwhile, Kathleen Sgamma, president of the Western Energy Alliance, noted that the supply-side approach in the bill doesn’t immediately pose a risk to the oil industry.

Electric vehicles, for example, are still expensive enough that they don’t replace the gas cars on the road, and most new vehicles, and the massive used-car market, continue to need gasoline, she said.

“This bill isn’t going to make a dent in any of those scalability issues,” she said.

Though her organization opposes the bill due to its increased burden on operators faced with higher royalties and other costs, she said the leasing deal was a “clever” strategy to keep different energy sectors in the mix.

“The bill forces them not to neglect oil and natural gas,” she said.

Correction: The original version of this story incorrectly included details of an oil and gas bonding provision that was struck before the Senate passed the final climate bill.