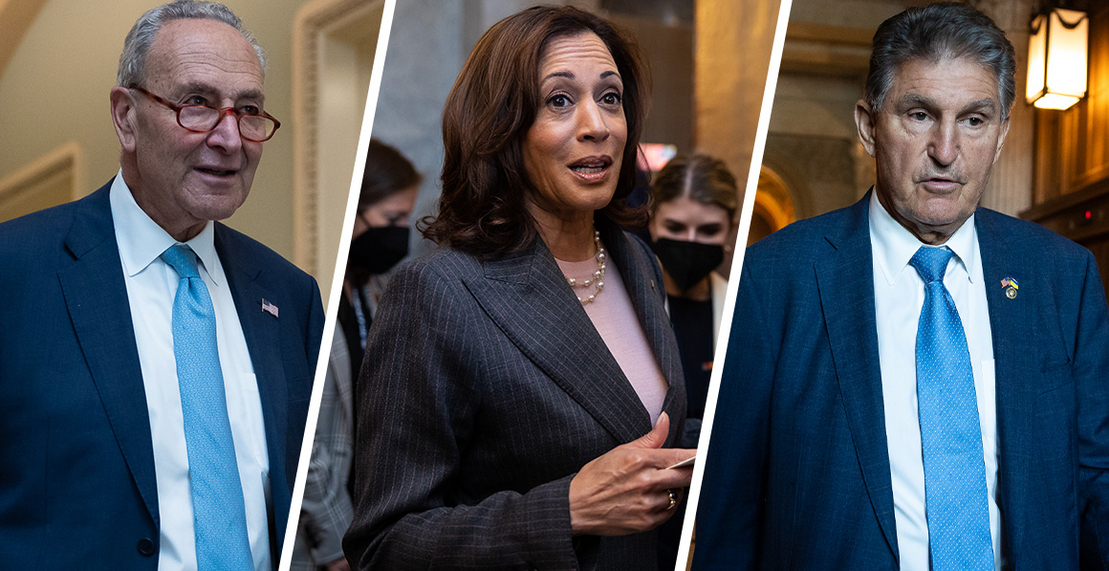 That’s not all. Far from it.

Packed into the bill’s 755 pages are provisions, tweaks, dictates and dollars for a wide array of Interior Department, EPA and Agriculture Department programs, among others (E&E Daily, Aug. 8).

“The Department of the Interior will play a critical role in our nation’s path forward to reduce emissions, secure environmental justice, and develop a robust and sustainable clean energy economy,” Interior Secretary Deb Haaland said in a statement.

The overall bill would provide tax certainty for clean energy technologies, including renewables, energy storage, nuclear and carbon capture, among others. It also includes a methane fee on oil and gas operations, as well as a host of provisions directing more lease sales on public lands and waters for fossil fuel development as Interior also ramps up leasing for offshore wind.

In what amounts to a cautionary note, the bill includes, as well, a $10 million slice for Interior’s Office of the Inspector General. The added funding would help the OIG monitor the department’s share of the bill that, overall, contains $369 billion in climate and energy spending.

The OIG funding is similar to a boost that had been provided as part of the Biden administration’s 2021 pandemic relief package. In both cases, lawmakers and auditors alike have wanted to keep a close eye on the flow of dollars.

“We appreciate that Congress values the vital role that our office plays in helping to protect federal funds from fraud, waste, and abuse, and promoting efficiency throughout the Department. We will use these funds to continue to prioritize high-impact oversight projects that will provide the Department and its stakeholders with valuable, actionable information and recommendations for improvement,” OIG spokesperson Susan Ruge-Hudson told E&E News today.

The additional OIG funding in the bill that now goes to the House is matched with increases for the watchdog offices of the Energy Department and several other federal agencies.

In other cases, the bill would boost support in areas that advocates have long deemed to be underfunded.

The Fish and Wildlife Service, for instance, would get an additional $125 million for developing and implementing recovery plans for species listed under the Endangered Species Act. Environmental groups have lambasted the agency for falling behind on the required recovery plans.

FWS would get another $121.25 million to make direct expenditures, award grants, and enter into contracts and cooperative agreements for the purposes of rebuilding and restoring units of the National Wildlife Refuge System and state wildlife management.

In particular, the funding would be directed to “addressing the threat of invasive species, increasing the capacity of habitats and infrastructure to withstand weather events and reducing the amount of damage caused by weather events.”

An additional $3.75 million would provide for related administrative costs.

The National Park Service would get an even bigger share of the pie. The legislation includes:

The Land and Water Conservation Fund’s co-chair, Lesley Kane Szynal, called the bill “terrific news” for land and water conservation efforts.
“These investments, in tandem with other important provisions in this legislation, represent a historic commitment to climate action that will only increase the reach and power of the dedicated conservation funding … in the 2020 Great American Outdoors Act,” Szynal said.

In other cases, the package would provide funding for lesser-known work that can fly below the radar.

The bill, for instance, would provide $23.5 million to the U.S. Geological Survey to “produce, collect, disseminate, and use 3D elevation data.”

USGS’ 3d Elevation Program is described as a response to “growing needs for high-quality topographic data and for a wide range of other three-dimensional representations of the Nation’s natural and constructed features.”

EPA would receive billions of dollars to aid in the fight against climate change.

“This is a big deal for all people and our planet,” EPA Administrator Michael Regan said in a tweet thread yesterday after the bill passed the Senate. He added his agency will invest billions of dollars in deploying “zero-emission” technology.

The legislation contains more than $4.5 billion intended to track and cut emissions of conventional air pollutants, as well as greenhouse gases, according to a summary from the Senate Environment and Public Works Committee.

Most of that money, $3 billion, would be targeted to spending on grants and rebates for improving air quality at ports that are often pollution hot spots. Another $1 billion would similarly be steered toward replacement of school buses, garbage trucks and other medium- and heavy-duty vehicles with zero-emission models.

For both pots of money, a sizable share would be set aside for areas failing to meet EPA’s ambient air quality standards for ozone and other common pollutants.

The remaining funds would go to myriad programs, including air toxics monitoring and wood stove emission testing. The bill also contains $27 billion to help EPA leverage private investments for “projects that combat climate change,” the summary says, and another $1.55 billion to reduce releases of methane, a potent greenhouse gas.

Both programs could also help curb emissions of other pollutants like nitrogen oxides and volatile organic compounds that are closely linked to fossil fuel production and combustion.

The bill also would provide $3 billion to EPA for environmental and climate justice block grants, according to the committee’s summary. Those grants would help with pollution monitoring; mitigating climate and health risks; climate resiliency; reducing indoor air pollution; and assisting disadvantaged communities to engage with state and federal government.

It also includes a more generous and long-lasting tax credit for CCS, including direct payments over the next five years for companies that embrace the technology. For hydrogen, it would set a first-of-its kind tax credit of $3 per kilogram produced that could boost production in ways that benefit not only the utility sector but industrial processes including fertilizer.

Much to the relief of advocates, the bill successfully retained a key Superfund tax targeting the oil and gas industry, one of three that expired in the mid-1990s. That tax will direct industry funds to EPA’s deeply backlogged efforts to clean up the nation’s most contaminated sites.

Another lapsed Superfund tax on chemicals was included in the sprawling infrastructure bill that passed last year and Democrats had hoped to include the fossil fuels pay-for in their doomed “Build Back Better” bill. The oil and gas excise tax, marketed as a “polluter pays” provision, is estimated to raise $11.7 billion over the next decade (E&E Daily, Aug. 3).

The bill would direct billions of dollars to agriculture and forestry programs, which advocates called a big win. Conservation programs that help farmers sequester carbon and preserve healthy soil would see a flush of cash as Congress begins to write the next five-year farm bill due for renewal next year.

A provision to make a priority of conservation projects that adjust cows’ diets to cut down on methane emissions survived. And the spending levels on conservation were comparable to what the earlier (and larger) “Build Back Better” version of the legislation had envisioned.

Overall, the bill is a “historic win for climate,” said Erik Kamrath, Washington representative for the Union of Concerned Scientists’ food and environment program. The National Sustainable Agriculture Coalition called it an unprecedented step on climate change and food production, adding, “For farmers, ranchers, and communities, this is cause for celebration.”

But Kamrath said he was unhappy that some provisions related to climate and agriculture were stripped from the legislation.

“The fact that some of this climate prioritization language was taken out due to a Senate rule is disappointing and all the more reason why the next farm bill must be a climate bill,” Kamrath told E&E News after the final version was released.

The boost in conservation programs would affect the next farm bill, either by temporarily increasing the budget baseline heading into the legislation or by setting a tone for the bill’s priorities, farm groups said. Any budget baseline effect would be temporary, however, as the increases run out in fiscal 2027, before the farm bill expires.

But the committee’s ranking Republican, Sen. John Boozman of Arkansas, said the measure sets a bad precedent for farm programs, having been rammed through without hearings or committee action. “We have never written a farm bill in this manner,” he said.

Forestry provisions saw tweaks, too. The final bill, like an earlier version, includes $50 million for protection of old-growth and mature forest, but removes earlier language that said the money should be used to “carry out activities and tactics” for that goal — wording that had caught the attention of the timber industry, which questions the policy.