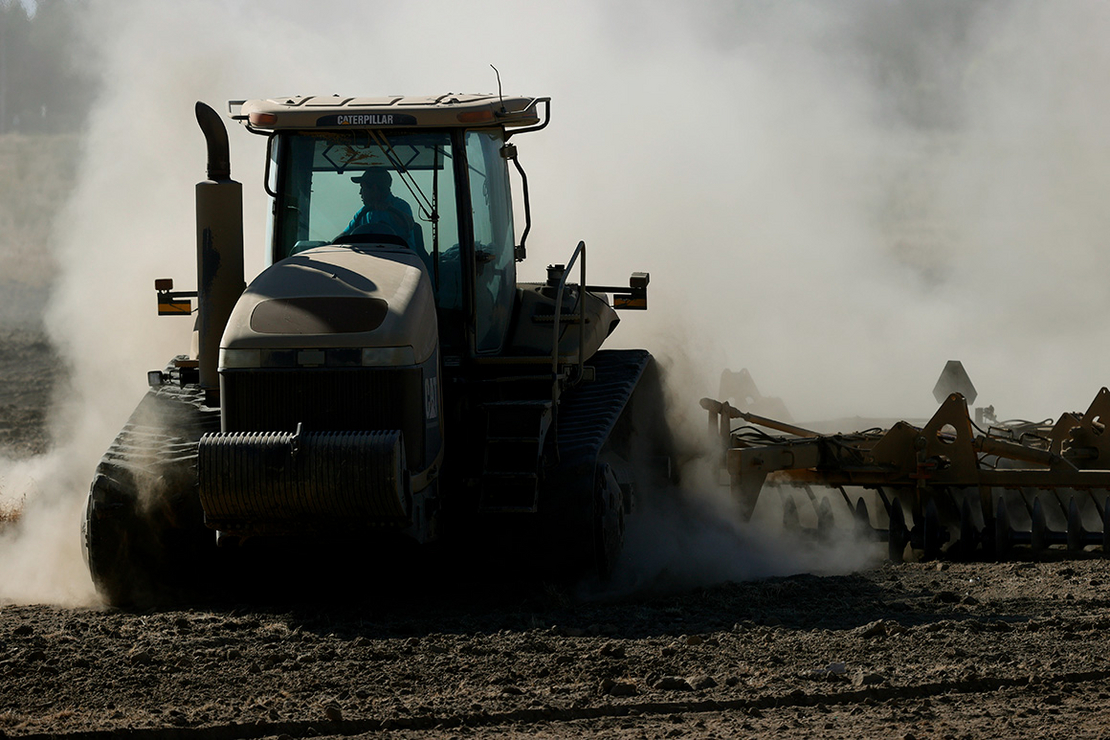 A tractor kicks up dust as it plows a dry field in Chowchilla, Calif. Justin Sullivan/Getty Images

The latest entrant is a biomethane- and electric-powered tractor from the AUGA Group, a Lithuanian organic food company that represents European farm machinery manufacturers. The combination of biomethane and electricity allows to the tractor to run as long as 12 hours, the company said when it announced the development in late September.

Other companies are offering alternatives as well, relying on ethanol, soy-based biodiesel or electricity to reduce farm machinery’s environmental impact — and hoping for more incentives from the federal government to make the new tractors economically feasible on a bigger scale.

"It’s kind of conceptually not that difficult," said BJ Johnson, co-founder and CEO of ClearFlame Engine Technologies in Geneva, Ill., which converts traditional diesel engines to ethanol in tractors, trucks and other heavy equipment. He credits the trend toward lower carbon emissions for breathing life into the technology. "That’s opened up a big door."

Tractors aren’t agriculture’s biggest generator of greenhouse gases, a distinction that belongs to livestock-related emissions. EPA reported that off-road agricultural equipment, including tractors, released about 100,000 metric tons of carbon dioxide equivalent in 2019, out of 1.4 million metric tons for all nonroad mobile combustion.

The numbers for agricultural equipment were unchanged over the past several years but were half of the level reported in 2005, according to EPA.

Still, older diesel-powered tractors spew enough pollutants such as particulate matter and carbon monoxide to visibly dirty the air around them and have become a target for environmental groups. They’re not used strictly in the field, either, as farmers use tractors on the roads to move between farms and fields. Researchers say they’ve been largely overlooked in studies of fossil fuel contributions to climate change.

"Nonroad engines contribute significantly to air pollution," EPA said in 2018 in a fact sheet for owners and operators of such equipment. "These emissions help form smog and include toxic compounds such as benzene, so reducing them will benefit our health and environment. In the Clean Air Act, Congress requires us to set emission standards that address these problems."

Because farmers use tractors to drag equipment like planters and manure spreaders, the pollution issue is about more than the vehicle itself. Inefficient systems that connect machinery to the tractor force the engine to use more fuel and create more emissions — a challenge researchers at Purdue University said they’re tackling through improved hydraulic controls.

Tractors are regulated differently from cars and trucks. Beginning in the mid-1990s, EPA began requiring manufacturers to cut emissions though a series of tiered standards based on an engine’s horsepower.

Newly manufactured tractors must meet the standards under the Clean Air Act, although the rules exempt tractors built before the standards were put in place. The Department of Agriculture sometimes helps cover the cost of newer, cleaner-burning tractors for farmers through the Natural Resources Conservation Service, and California has a similar state-level program.

With continuously tighter requirements, and now climate-related goals, cleaner-burning tractors have a bright future, manufacturers say, if they can provide the kind of power farmers need.

A small tractor, such as for mowing lawns, might range from 15 to 20 horsepower, while the bigger tractors seen on farms can reach 450 horsepower. A small electric tractor made by Monarch, based in Livermore, Calif., can reach a peak of 70 horsepower. John Deere recently introduced a 400-horsepower electric tractor, powered by a cable, that has an additional modern feature: It doesn’t require a driver.

AUGA Group, the Lithuanian company, said it’s found a solution to another big challenge for alternatively fueled tractors: refueling them so they can last an entire day in the field.

Most biomethane tractors can run only two to four hours, the company said in a news release. The new tractor, called the AUGA M1, can fit larger biomethane gas cylinders, and cartridges can quickly be replaced. When the tractor is running, the biomethane engine transfers power to electric motors that move the wheels, while recharging the batteries.

The tractor can run for 12 hours, said the company, which aims to become carbon neutral by 2030.

Johnson, at ClearFlame Engine Technologies, told E&E News the federal government could help through legislation and policies that remove barriers for companies that want to introduce biofuel-powered tractors, trucks and other heavy-duty engines. "The underlying fuel economics are solid."

Johnson told the House Small Business Committee at a hearing earlier this year that his company supports "fuel-neutral, technology-neutral performance standards for engines and vehicles in all sectors."

"Ever since the first Clean Air Act was passed in 1970, this approach rewards small business innovators like ClearFlame, while accelerating rapid technology adoption, increasing consumer choice, and lowering costs," he said in prepared testimony.

"EVs don’t scare us. I think we need every electric vehicle we can get," Johnson said. "We don’t view EVs as a competitor."