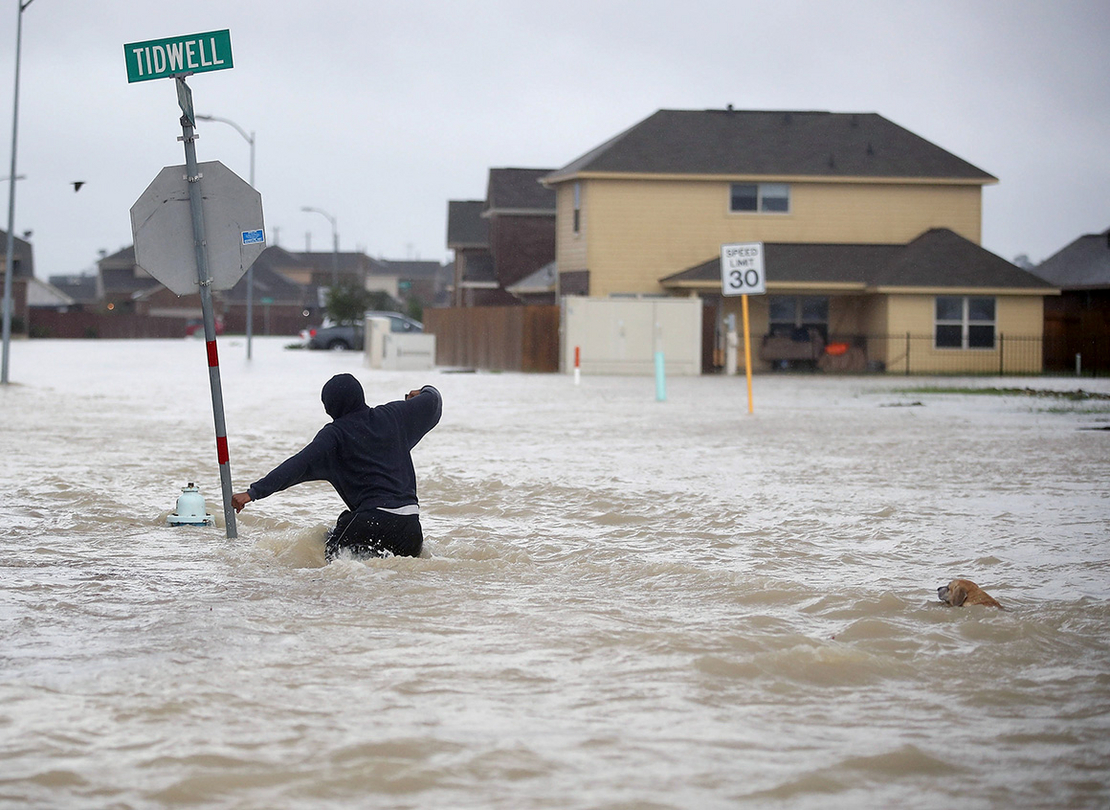 A person struggles through floodwater followed by a dog after Hurricane Harvey inundated parts of Houston in 2017. Joe Raedle/Getty Images

Precipitation in New Jersey was likely to increase 20 percent by 2100, the report found two months ago. And precipitation records maintained by NOAA — which are used nationwide to design infrastructure and map flood zones — are inaccurate, are outdated and underestimate potential flooding.

“One of the consequences of climate change is that we can no longer assume that what has happened in the past is a guide to the future,” Anthony Broccoli, co-director of the Rutgers Climate Institute, said at the time.

The New Jersey report was the latest indictment of NOAA’s precipitation records. It came as momentum was building to improve the records that NOAA itself acknowledges are flawed.

Congress and the Biden administration appear poised to give NOAA money, and mandates, to make its precipitation records up to date and reflective of climate change.

Proposals in Congress have bipartisan support as lawmakers recognize the growing intensity of rainstorms and the importance of accurate precipitation records to everyone from farmers to urban planners.

“Inaccurate precipitation data can be the difference between life and death for North Carolinians in flood-prone areas,” Rep. Deborah Ross (D-N.C.) said in November as the Science, Space and Technology Committee unanimously approved a measure she co-sponsored.

The bill, whose co-sponsors include 20 Democrats and four Republicans, would require NOAA to update its precipitation records every five years.

Another bipartisan bill, which passed the Senate by unanimous consent in September, would require NOAA to update records every 10 years.

“This information is absolutely critical to farmers and ranchers of Oklahoma,” Rep. Frank Lucas (R-Okla.), a co-sponsor of the House bill, said at the committee markup in November.

The NOAA records being targeted are a series of reports called Atlas 14. They document precipitation histories of each state and chart the maximum likely precipitation anywhere in the U.S. over various time periods, such as an hour or a day.

“They’re very important to the engineering community, to land use planning, particularly in areas subject to high precipitation,” said David Conrad of the Association of State Floodplain Managers.

But many Atlas 14 reports are considered archaic because they are updated infrequently and rely on precipitation records that are decades old and do not account for the increased precipitation caused by climate change.

“It’s almost shocking how much infrastructure is built based on historical data” of precipitation, said Lexi Shultz of the American Geophysical Union. “If we don’t take climate change into account, we will be building infrastructure that is out of date the minute it’s built.”

“There’s more water up there, and when it releases, it releases vast and heavy,” Shultz said.

The effect of climate change and shortcomings of Atlas 14 came into national focus after Hurricane Harvey dumped record rainfall on southeast Texas in 2017.

Texas officials are using the new report to tighten design standards and redraw flood maps. But if NOAA had updated its precipitation estimate earlier, communities might have taken those steps before Harvey caused $140 billion in property damage.

“One of the big questions for Harvey was, why were so many thousands of buildings flooded that were outside the 100- or 500-year floodplain?” Conrad said, referring to areas that are considered most at risk of being flooded. “The implication was that maps are not accurate and Atlas 14 data were way out of date.”

The New Jersey precipitation report two months ago was evidence of Atlas 14’s shortcomings. The New Jersey Department of Environmental Protection commissioned the study to get an accurate projection of future precipitation because it knew NOAA’s rainfall records were outdated.

The Atlas 14 reports are updated only every few decades because NOAA has never had funding for that process. Instead, the updates are funded by state and local agencies that pool their resources to pay for a new report.

“Municipalities or states essentially pass the hat to create the funding to trigger NOAA’s uptake of an update to Atlas 14,” NOAA senior adviser Mark Osler told Congress in 2020.

The two bills in Congress would authorize funding for NOAA to update Atlas 14.

Meanwhile, advocates are focusing on a large chunk of money that was given to NOAA in the sweeping infrastructure bill that President Biden signed in November.

The $1.2 trillion measure includes $492 million for NOAA flood mapping and forecasting, and water modeling activities such as the precipitation analyses that form the basis of Atlas 14. The law gives NOAA until mid-February to come up with a spending plan for the $492 million.

Last week, Chad Berginnis, executive director of the Association of State Floodplain Managers, wrote to NOAA Administrator Richard Spinrad and Commerce Secretary Gina Raimondo urging them to use the money to “modernize and update” Atlas 14.

“For years, a chronic lack of funding has resulted in much of the nation’s extreme precipitation data having fallen far behind current experience,” Berginnis wrote.