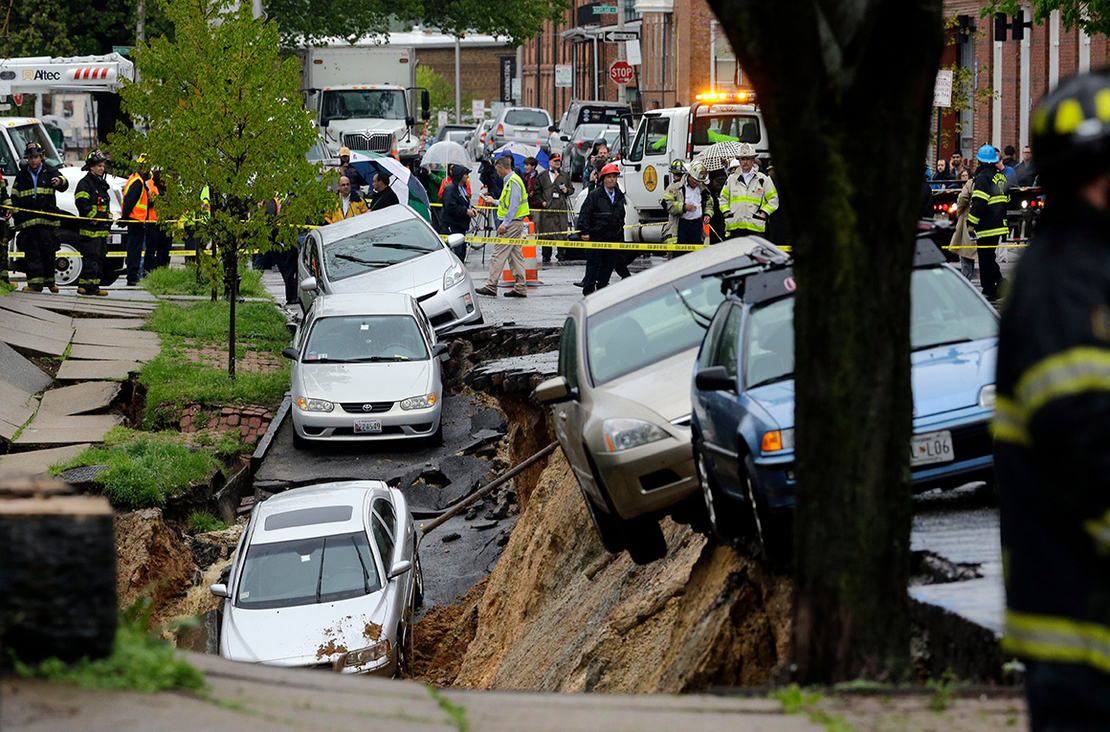 Cars sat on the edge of a sinkhole in the Baltimore neighborhood of Charles Village following a period of heavy rain in April 2014. AP Photo

The 4th U.S. Circuit Court of Appeals said yesterday that it would not rehear arguments by BP PLC and other companies that Baltimore’s climate case should be heard in federal — rather than state — court, setting the stage for industry to bring its fight once again to the nation’s highest bench. The decision came as industry attorneys last night asked the 9th U.S. Circuit Court of Appeals to reconsider a similar ruling against fossil fuel producers in a separate liability case out of California.

In another suit filed by Boulder County, Colo., oil companies have been given until June 8 to request that the justices overturn the industry’s loss in the 10th U.S. Circuit Court of Appeals.

“We have this landscape where all these issues are percolating toward the Supreme Court,” said Theodore Boutrous — a partner at the firm Gibson, Dunn & Crutcher LLP — representing Chevron Corp. during a hearing yesterday to consider whether yet another climate liability lawsuit should proceed in state court in Hawaii.

The cases are among more than two dozen that have been filed by state and local governments across the country, seeking compensation from industry for flooding, wildfires and other ravages of climate change.

Baltimore’s case last year made its way up to the Supreme Court, which sided with the oil and gas industry in finding that appellate judges could consider a broader set of arguments in favor of keeping the climate liability lawsuits in federal court, where companies believe they face better odds. The venue fight has stymied the vast set of cases.

Sara Gross, chief of the affirmative litigation division in the Baltimore City Department of Law, welcomed the 4th Circuit’s rehearing denial yesterday, noting that it’s the third time the appeals court has found that the case belongs before state judges.

“The defendants were told today that not a single one of the 4th Circuit’s judges was interested in hearing more from them,” she said. “We expect they will petition the Supreme Court next in yet another attempt to avoid accountability for deceiving Baltimore’s residents, workers and businesses.”

In the Baltimore case, a three-judge panel of the 4th Circuit last month rejected eight arguments that oil and gas companies raised in a bid to move the lawsuit to federal court. The judges said they “resoundingly” agreed with Baltimore that the case did not raise federal issues and said they were confident that Maryland courts could weigh the claims.

Two weeks ago, industry lawyers asked the 4th Circuit to take the question to a full panel of the court’s judges, saying the earlier ruling that favored Baltimore conflicts with precedent (Climatewire, May 6).

Attorneys for the companies had cited a 2021 ruling by the 2nd U.S. Circuit Court of Appeals that upheld dismissal of a climate liability suit brought by New York City against five fossil fuel firms, finding that the city’s claims were preempted by the federal Clean Air Act.

In its ruling, the 2nd Circuit noted that New York had originally filed its complaint in federal court. Baltimore and a number of other state and local governments launched their climate liability cases in state courts.

In their request for rehearing in the 4th Circuit, industry attorneys argued that federal law “necessarily and exclusively governs claims seeking redress for injuries allegedly resulting from global climate change.”

Fifteen Republican-led states last week backed the industry’s request, warning of “utter chaos” if the 4th Circuit did not reconsider its decision. Led by Indiana Attorney General Theodore Rokita, the states argued that the ruling “threatens to let a single state’s judiciary set climate-change policy for other states” (Climatewire, May 16).

‘We need to know the rules of the road’

Appellate judges across the United States have largely rejected the fossil fuel industry’s argument that climate liability cases should not be heard in state court because they involve federal officials.

After the Supreme Court last year instructed appellate judges to consider more of the industry’s jurisdictional arguments, three appeals courts, including the 4th Circuit in Baltimore’s case, have so far affirmed that the cases belong before state benches.

In a case out of California, industry attorneys last night filed a petition for hearing in the 9th U.S. Circuit Court of Appeals. The court last month rejected arguments from major oil and gas companies — including BP, Chevron and Exxon Mobil Corp. — that the lawsuit seeking damages for climate impacts should be transferred to federal court

“Even if the complaints raise federal policy issues that are national and international in scope … they do not ‘raise a substantial question of federal law for the purpose of determining whether there is jurisdiction,'” Judge Sandra Ikuta, a George W. Bush appointee, wrote at the time (Climatewire, April 20).

In the hearing yesterday in the Hawaii litigation, Boutrous of Gibson Dunn asked Hawaii First Circuit Judge Jeffrey Crabtree to hold off on advancing the local case until the question before federal appeals courts is resolved. He said the companies believe they are likely to win.

Crabtree in March rejected the third of three requests by industry lawyers to dismiss Honolulu’s climate liability lawsuit, moving the case toward trial and discovery in state court — the first of the challenges to get that far (Climatewire, March 4).

“These issues are uncharted waters to a certain extent, and before we have a trial and discovery and all of those battles, we need to know the rules of the road,” Boutrous said. “It’s just complicated. It will be extremely burdensome.”

Sher said: “All three rejected the defendant’s repeated efforts to mischaracterize the cases as being inherently federal.”