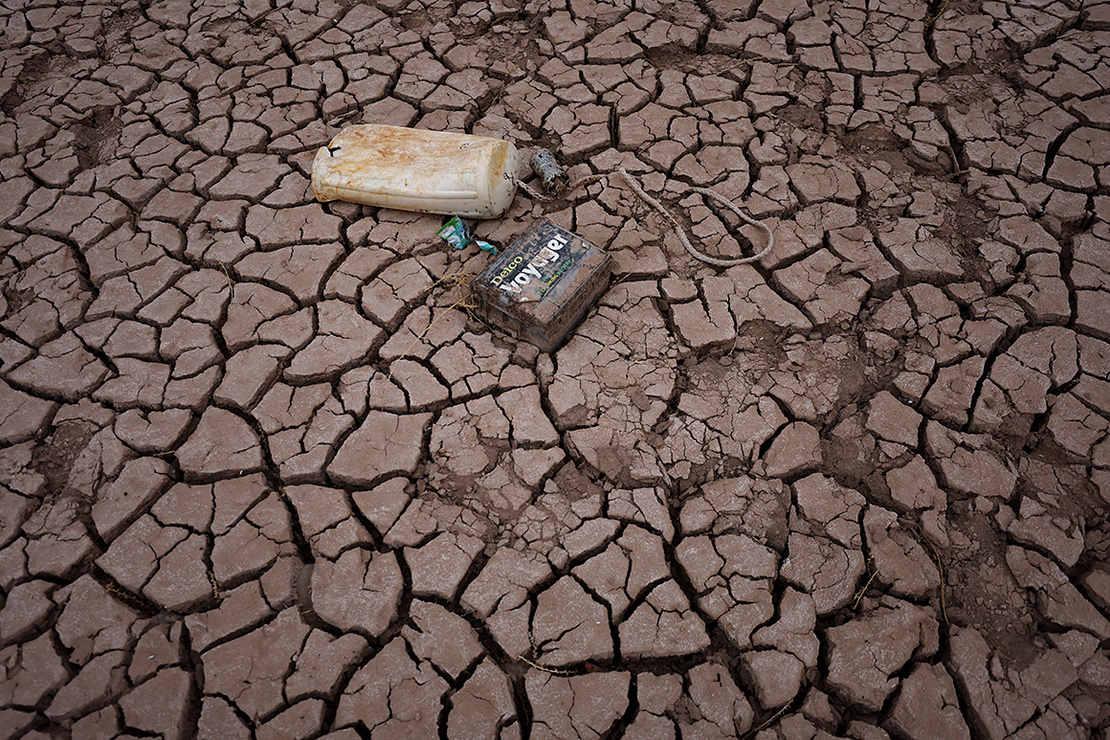 Dry, cracked earth is visible in an area of Lake Powell, one of the huge reservoirs on the Colorado River, that was previously underwater on March 28 in Page, Ariz. Justin Sullivan/Getty Images

Western states that rely on the Colorado River Basin for their water supplies face a Tuesday deadline to tell the Bureau of Reclamation how they plan to cut back during the crushing drought that has shrunk the river. But as that date nears, the consequences for failure remain a key unknown.

Reclamation Commissioner Camille Touton announced in June that states in the Colorado River Basin need to propose how to conserve between 2 million and 4 million acre-feet of water before a mid-August deadline, when the agency releases its 24-month projections for water levels in lakes Powell and Mead (E&E Daily, June 15).

If the seven states — Arizona, California and Nevada in the Lower Basin and Colorado, New Mexico, Utah and Wyoming in the Upper Basin — fail to do so, Biden administration officials have emphasized the threat of federal intervention.

But as the clock ticks down to next Tuesday’s deadline, questions linger over whether states can, or will, meet those demands, and the consequences remain nebulous.

Beard and other Colorado River experts said Reclamation never before has taken steps to impose significant reductions in flows at a basinwide level.

“The reason nobody has made these decisions in the past is because they’re painful,” Beard said.

While coalitions, individual states and irrigation districts weigh how to make difficult choices — whether fallowing agricultural land or forcing cutbacks on bluegrass lawns — the Interior Department has eschewed offering specifics ahead of next week’s deadline.

Reclamation referred questions on the process, including whether it will require time to review the state proposals or make immediate recommendations, to Interior.

Interior declined to comment on the process beyond citing the Aug. 16 deadline and ongoing negotiations among states.

Assistant Secretary for Water and Science Tanya Trujillo said last month that those negotiations are not a one-time process.

“We’re going to continue working this week, next week and through the next few years to build these tools,” Trujillo said at the Western Governors’ Association’s annual meeting. “And then think proactively about the next set of guidelines, the next set of rules to help us balance the supply and the demand in the context of the changing conditions that we’re seeing” (Greenwire, July 29).

A person familiar with the process, who could not speak on the record due to the sensitive nature of those ongoing discussions, could not provide details but asserted that “Reclamation has never taken measures of this scale and importance.”

Those steps could be crucial if states fail to propose water use reductions on their own.

In a letter to Reclamation last month, the Upper Colorado River Commission, an interstate agency that represents those four states, offered little in the way of action, saying the states on the lower end of the river should be the ones to cut back. The coalition asserted its member states don’t have tools to deploy, saying they are “naturally limited to the shrinking supply of the river” (Greenwire, July 20).

At the same time, major irrigation districts in Southern California are reportedly weighing whether to pay farmers to stop growing on agricultural lands, an effort that could cost billions of dollars through 2026 while saving 400,000 acre-feet of water (Greenwire, Aug. 5).

Senate lawmakers put $4 billion for drought into the reconciliation package approved Sunday, some of which could be used to pay for those kind of programs (Greenwire, Aug. 9).

But the person familiar with the Colorado River Basin negotiations said the Biden administration will only consider formal proposals from the seven basin state governments, rather than coalitions or individual water districts.

The Colorado River Basin supplies water to 40 million people in the United States and Mexico, but more than two decades of drought have significantly reduced the 1,400-mile-long river.

Beard, who has advocated for replacing Reclamation with an independent agency like the Defense Department’s Base Closure and Realignment Commission, predicted that his former bureau is unlikely to crack down on states.

“The ball is now in the court of the Bureau of Reclamation and Department of the Interior, and I’d be flabbergasted if they came forward with a proposal that inflected any substantive pain on any particular group,” Beard said.

That’s in part due to the timing of the initiative, which falls just three months before the midterm elections.

“As you actually take substantive steps, the pain levels go up, and the political fallout goes up,” Beard said.

Beard emphasized, however, that rank-and-file executive branch employees could address the issue.

“Reclamation and the experts in the agencies, they know what can be done. They know how to reduce water use and come up with a savings,” he said.

While the Upper Basin states told Reclamation there weren’t actions they could take to help maintain the river, Beard pointed to the possibility of stopping diversions and dams that some Western states are considering. But water managers have defended some of the projects, like the expansion of the Gross Reservoir in Colorado, as key to their water management during the difficult drought period (Greenwire, June 22).

Beard also reiterated his support for abandoning Lake Powell and dismantling the Glen Canyon Dam: “It doesn’t work, and it isn’t needed,” he asserted.

Like other critics of maintaining the Glen Canyon Dam and its reservoir, Beard describes the project as a “dinosaur” that failed to consider the impacts of climate change or drought that have steadily reduced water levels in the lake. Proponents of removing the dam or creating outlets to funnel water around it argue that restored flows would benefit Lake Mead.

As Interior officials weigh their options, possible blowback to any government intervention is also likely high on their minds.

The Klamath River Basin in Oregon was the site of protests in 2001, when Reclamation cut off water to farmers in a drought, in order to protect threatened salmon.

Farmers, who rely on the Klamath project to irrigate about 230,000 acres of cropland, protested and even pried open the headgate of an irrigation canal.

Reclamation last year avoided a repeat of the 2001 incidents, providing $15 million in aid to the region, as well as $3 million to local tribes for ecosystems.

Tom Minckley, a professor of geology and geophysics at the University of Wyoming, said regardless of whether federal agencies or state officials plan for less water, the Colorado River is shrinking.

"All of the changes that nobody hopes would occur during their watch are going to start happening. There's no reason to think this drought will be over anytime soon," Minckley said.