Coal has always been king in the South. Now that’s changing 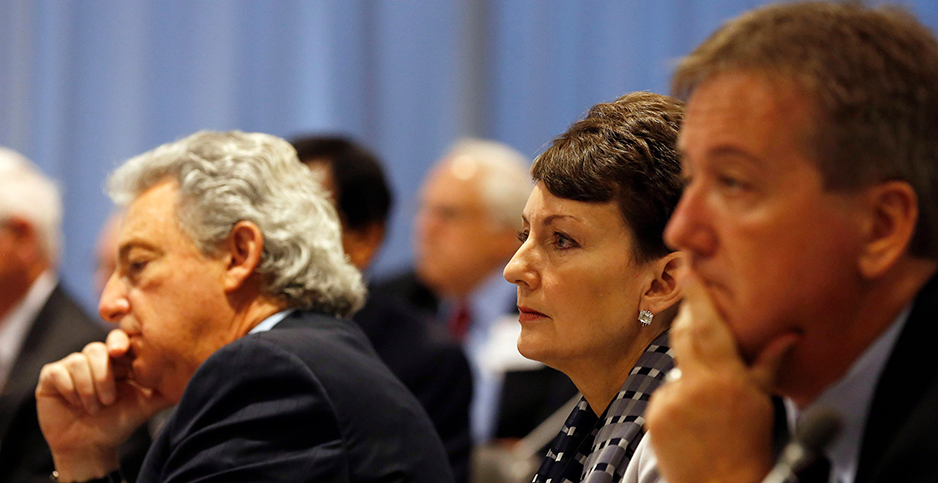 Duke Energy Corp. CEO Lynn Good (center) is overseeing the closure of three coal units in North Carolina. The company plans to expand its use of natural gas. Larry Downing/Reuters/Newscom

Duke Energy Corp. is one of the largest coal burners in America. But the North Carolina-based utility’s coal fleet is running less and less, an E&E News review of federal data shows.

In a sign of mounting economic distress, nine of the company’s 13 coal plants ran less than half the year in 2018. Eight of those facilities averaged annual run times of less than 50% between 2014 and 2018. Only two of the company’s coal facilities produced more electricity in 2018 than they did five years earlier.

Duke has started to close more coal plants in response. On Monday, the utility filed a plan with North Carolina regulators that moved up the retirement dates of three coal units. That followed a release of its plan with Indiana regulators in June that advanced the closure of seven coal units there.

More early retirements could be announced when the company’s second North Carolina subsidiary files its rate case with regulators in the coming weeks.

"These unit retirement dates have been adjusted due to sustained, low gas prices making some of the older (and less efficient) units less competitive, especially at sites where we have no plans to add dual fuel or gas co-firing," Erin Culbert, a Duke spokeswoman, wrote in an email yesterday.

Duke is a central character in a wider story about coal plants in America. Coal facilities generally carry high fixed costs but are able to generate electricity relatively cheaply because they churn out large quantities of electrons around the clock. But as more natural gas and renewable power comes online, coal plants are running less. That undermines their economic viability.

Yet utilities are not always quick to close those coal plants down, prompting charges from critics that they are saddling customers with additional costs and pumping millions of tons of additional carbon into the atmosphere.

The story is particularly noticeable in the Southeast. A 2017 study by the Department of Energy found that coal retirements in the region lagged behind other parts of the country.

Power plant run times, often referred to as capacity factors, are a key indicator of economic health, especially for coal plants, which are designed to run around the clock. DOE’s 2017 study found 70% of the plants that shut down between 2010 and 2016 posted a sub-50% capacity factor the year prior to their retirement.

Seven of the Southeast’s 10 largest plants ran less than half of the year in 2018. Four of those averaged annual run times of less than 50% between 2014 and 2018. None produced more electricity in 2018 than they did five years earlier.

Several of the country’s largest coal plants are flirting with the 50% threshold. Southern Co.’s Scherer and Bowen plants in Georgia are the largest and second-largest plants nationally in terms of capacity. In 2018, they reported capacity factors of 51% and 48%, respectively. The company’s Wansley plant, also in Georgia, posted a measly 18% for the year.

"It raises the question [of] how long are these plants going to hold on for and what are they holding on for," said John Larsen, an analyst who studies utilities at the Rhodium Group, an economic consulting group.

Others boasted lower averages for noneconomic reasons. Santee Cooper idled one of its four units at its Cross Generating Station in South Carolina in anticipation of the V.C. Summer nuclear plant coming online. The mothballed unit helps explain Cross’ pedestrian capacity factor of 46% last year. Santee Cooper turned that unit back on when the V.C. Summer project fizzled.

"In our experience, lower gas costs, in combination with dispatching more efficient generation units first, has resulted in lower capacity factors for many of our coal units," she said.

Despite the declining run times, Southeastern utilities have few plans to close their coal behemoths. Duke’s Roxboro plant, for instance, will shut down two of its four units in 2028 and another two in 2033 under the company’s current plans. Southern has no plans to close any of its larger units, though it has begun discussing the future of two units at Bowen (Energywire, Feb. 1). And TVA is not considering a retirement date at present for Cumberland.

Even at those reduced rates, Southern coal plants remain some of the largest carbon emitters in America (Climatewire, Aug. 23).

"These coal plants were designed as cars for the highway, and now they’re stuck in city traffic," said David Rogers, Southeast deputy director for the Sierra Club’s Beyond Coal campaign.

Utilities have argued that coal plants are needed to ensure reliability, especially during weather events that prompt demand to spike. But there also are economic reasons to keep some plants open in the Southeast.

Most utilities in the region operate as regulated monopolies, enabling them to recover the cost of building and upgrading their facilities from their customers. That typically takes decades. But closing plants early means utilities either run the risk of failing to recoup their investment or charging their customers more to close coal plants sooner.

Older plants are an exception because most of the debt is paid off.

"If you take a coal plant out that’s been operating for 50 years, it’s probably not having a big impact on customer rates," said Travis Miller, a utility analyst with Morningstar Inc.

That helps explain the Duke retirements announced in North Carolina this week. Duke had initially planned to close three of the five units at the Allen plant in 2024 and the remaining two in 2028. Now all five will be closed in 2024. The Allen plant is among the oldest in Duke’s fleet. It reported a capacity factor of just 9% in 2018, according to EIA data.

Duke, for instance, is making several investments to overhaul its coal fleet so those units can also burn natural gas. Those moves come as the company asked the Nuclear Regulatory Commission to extend the operating licenses for its reactors in North and South Carolina to help meet its clean fleet goal.

"I don’t think it’s that surprising that Duke has reevaluated the life span of its coal plants and is trying to address that in a regulatory filing," said Paul Patterson, a utility analyst with Glenrock Associates LLC. "As the industry is transforming, I think the life span of these earlier investments is going to change. That’s just part of the theme, I think."

Duke’s request to shut down some of its coal units earlier than expected follows its announcement to decarbonize by 2050. Its home state of North Carolina has also become the first in the Southeast to set a carbon neutral goal by 2050 (Energywire, Sept. 30). This includes a 70% emissions reduction by 2030, relative to 2005 levels, as part of the state’s Clean Energy Plan prepared by the Department of Environmental Quality.

Rogers, the Sierra Club representative, applauded Duke’s recent moves, calling them a step in the right direction. But he argued there is little preventing Duke from retiring its Allen units next year when the plant only ran 9% of 2018. An expedited retirement schedule, he said, could also be applied to other Duke facilities.

If fears over the company’s ability to recoup its investments are preventing it from moving up those dates, then policymakers and regulators could explore options for helping pay off those units. Colorado and New Mexico enacted legislation this year aimed at helping power companies pay down coal plant debts.

"The reality is that isn’t going to change. We’re going to get more solar. People are going to invest in more behind-the-meter technology to control demand," Rogers said. "It behooves Duke to recognize this is going to continue and make smarter long-term decisions."