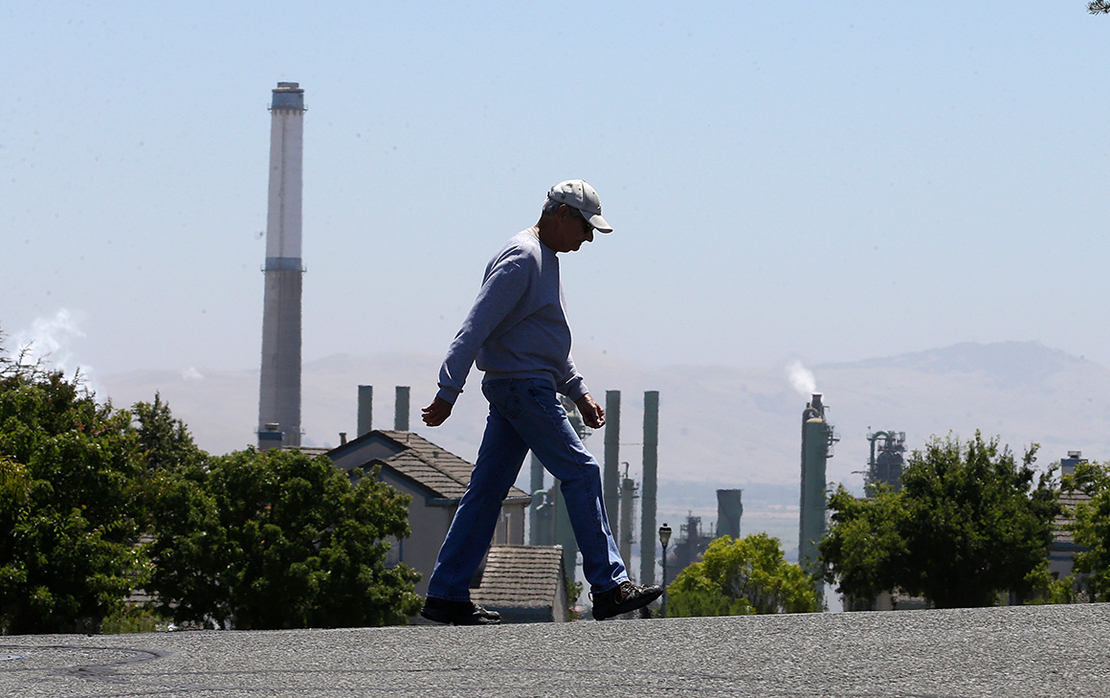 A person walks by the stacks of the Valero Benicia Refinery in a neighborhood of Benicia, Calif. AP Photo/Rich Pedroncelli

When EPA issues its supplemental draft rule on methane later this year, it’s expected to propose a new role for air quality monitoring by nonprofits and fence-line communities sited near oil and gas development.

The agency’s first draft of the methane rule, released in November, solicited ideas on how EPA could leverage a recent boom in monitoring conducted by communities, independent scientists and nonprofits to find and fix leaks more swiftly (Climatewire, Nov. 11, 2021).

Agency officials have said the goal is to empower fence-line communities that live in the shadow of oil and gas development and may be affected by its pollution (Climatewire, Dec. 23, 2021).

But in comments posted to the rule’s docket last winter, the petroleum industry questioned whether EPA has the authority under the Clean Air Act — the law it uses the regulate emissions linked to climate change — to lean on third-party monitoring when implementing a rule.

And community-based groups say EPA should furnish the technology they need to conduct air quality monitoring — or at least subsidize it. That’s especially important, they say, if the goal is to catch and fix leaks in poor neighborhoods as well as rich ones and to guarantee access to high-quality data.

“Our stance as an organization is that if the EPA is looking to expand monitoring in places like Washington County in southwest Pennsylvania, here in places where there are lots of distributed sources of air emissions, it would be best if the EPA themselves were the ones that did that,” said Nathan Deron, an environmental data scientist at the Environmental Health Project, which helps communities located near shale gas development in Pennsylvania conduct monitoring and interpret the results.

“There’s a lot of issues around equity and data quality and reliability that are hard to address with residents running data collection networks,” he said.

EPA’s proposal provided only a sketch of the upcoming program. But it asked respondents for ideas about how to set standards for third-party monitoring for leaks requiring action from an operator, what those compliance obligations should look like, and how big a gas leak should be before it triggers an urgent remediation.

“We generally envision a program for finding large emission events that consists of a requirement that, if emissions are detected above a defined threshold by a community, a federal or state agency, or any other third party, the owner or operator would be required to investigate the event, do a root cause analysis, and take appropriate action to mitigate the emissions, and maintain records and report on such events,” EPA said in the proposal.

A supplemental proposal is expected in late summer or fall, with final rules for new and existing oil and gas sources coming next year.

The oil and gas sector has slowly warmed to the idea of federal regulation of methane emissions after years of resistance. But petroleum trade groups expressed concern in their comments to EPA last winter about the agency’s plans to elevate third-party monitoring.

The American Petroleum Institute, which reversed course last year to throw its weight behind the concept of EPA methane regulation, challenged EPA to produce a legal rationale for its “novel” proposal to carve out a role for air quality monitoring by entities other than petroleum producers and regulatory agencies.

“To our knowledge, it would be the first time under the [Clean Air Act] that EPA asserts authority to create regulatory obligations for affected facilities based on monitoring conducted by unaffiliated third parties,” wrote the trade group in comments submitted to the proposal’s docket in January.

API stated that EPA’s proposal would compel affected facilities to address leaks identified through monitoring by unaffiliated parties. EPA’s November draft rule was less definitive, suggesting only that this year’s supplemental proposal would “specify what actions an owner or operator must take when notified of a large emission event, including deadlines for taking such actions.”

API argues that EPA’s authority to require air quality monitoring is limited to owners and operators of facilities or certain manufacturers of control equipment. It points to statutory language in the Clean Air Act that appears to give the agency broader discretion, but states that it doesn’t apply to the part of the law that EPA is using to regulate oil and gas methane, or to the third-party watchdogs EPA imagines will participate in the new program.

Environmental groups including the Environmental Defense Fund, Clean Air Task Force and Earthworks in joint comments to EPA asserted that the agency had ample authority to create a monitoring program that allows it to accept and use emissions data collected by third parties. The data could be used to support further emissions reductions, the groups argued.

The last decade has seen a marked expansion in third-party monitoring as technology became cheaper and more available, and as communities saw unconventional production sites spring up.

Deron, of the Environmental Health Project, said that while EPA’s high-quality monitoring did a decent job of tracking regional pollution, it didn’t have the capacity to measure emissions near each individual wellhead. Indeed, EPA’s own map shows that there are 11 counties in Pennsylvania’s Marcellus Shale natural gas field where no EPA monitoring exists. Other counties with significant oil and gas production have only a single monitoring location.

Edwin LaMair, an attorney with EDF, said accessing and making use of third-party monitoring would help EPA respond to emissions-heavy events.

“There are already all these people out there doing monitoring, whether it’s a community group or scientists who are studying methane emissions,” said LaMair. “There are millions of oil and gas sources in the country. And so, in order to find where these big events are happening and get a handle on them quicker, having a number of folks out there who can report that data to EPA just makes sense from an efficiency and resource standpoint.”

Doug Henderson, a partner at King & Spalding LLP who specializes in environmental litigation, said Congress was aware when it enacted the Clean Air Act that EPA would never have enough staff to ensure full enforcement. That’s why the law — and other landmark statutes for water and chemicals — included provisions for citizen lawsuits that effectively allow third parties to act as state agencies, he said.

‘Calling it a day’

EPA’s third-party monitoring “pathway” seems to target high-emitting events like malfunctioning control equipment that “should not be occurring at a well-operating, well-maintained, and well-controlled facility,” EPA’s proposal said.

Research by EDF and others shows that this kind of event is responsible for a hefty share of the overall methane emitted from oil and gas sources and doesn’t correlate to production levels at a wellhead. In fact, an EDF study last month showed that low-emitting wells are responsible for half the sector’s methane emissions (Energywire, April 21).

For that reason, greens have pressed EPA to use its supplemental proposal to require so-called marginal wells to conduct the same monitoring and remediation as higher-producing wellheads.

The Independent Petroleum Association of America, which represents independent producers, has not embraced direct methane regulation. In its comments to EPA, IPAA raised safety concerns about third parties trespassing on production sites to conduct monitoring. But LaMair said methane monitoring could be conducted at a distance, so on-site access isn’t needed.

Petroleum industry officials noted that producers conduct their own monitoring and argued that third-party monitoring is duplicative. But environmentalists and community monitoring specialists say industry results are rarely shared with surrounding communities. Even when something goes wrong and emissions at a facility spike, they say, neighborhoods downwind might not be notified.

“They’re not telling communities, ‘Hey, something’s going on; we have to vent. So stay inside,’” said Deron. “They’re just simply venting and, you know, calling it a day.’”

Another problem, he said, is that low-producing wells may not be required to conduct rigorous monitoring — even if there are many of them close together in the same community.

But some oil and gas companies filed comments to EPA that were less critical of the agency’s proposed community monitoring “pathway.”

BP, which has long backed methane regulation, said in its comments on the November draft that “harnessing the power of this information can help to identify and solve problems in a transparent, efficient, and responsible way.”

But it cautioned that EPA should set guidelines and systems to ensure the integrity of community-generated data.

Environmental and community groups acknowledged that third-party monitoring varies in quality, making it better suited to flag instances where EPA monitoring might be warranted than to be the basis of enforcement itself. LaMair suggested that the data might be uploaded to an EPA portal to increase transparency.

But they want their data to be used to ensure that oil and gas facilities aren’t spewing harmful pollution into neighboring communities.

“They would like someone to do something about that,” she said.

But Pagel said local communities shouldn’t shoulder the burden of ensuring that their air is free of harmful emissions.

The Biden administration has aimed to step up fence-line monitoring as part of a larger environmental justice push. The Democrats’ stalled “Build Back Better” bill would have channeled $265 million toward increased monitoring at high-emitting facilities and in low-income and underprivileged communities.

But federal funding for community monitoring is still sparse, and that undermines its quality.

“The monitoring technologies we use are often referred to as low-cost monitors. And the less polite way of saying it is low-quality monitors,” said Deron of Environmental Health Project. “They’re what our organizations and our funders and our partners are able to afford. But they are imprecise, and nowhere near what the EPA uses.”

Besides relying on substandard equipment, volunteers or inexperienced field researchers might not be familiar with protocols that can help them avoid contaminating data, said Henderson, the environmental attorney, or they may misinterpret their findings.

“Air is particularly tricky, because you have to know what background levels are and what the wind direction is,” he said. If high levels of a pollutant are found, it might come from the interstate highway rather than the oil refinery next door, he added.

Some communities have sprung for higher-cost, higher-quality monitoring equipment at their own expense, or with some help from the operators of nearby oil and gas development.

Laurie Anderson, a field consultant with Moms Clean Air Force from Broomfield, Colo., where she is a City Council member, said the city has spent upward of $1.2 million a year since 2017 to track emissions from horizontal drilling operations by Extraction Oil & Gas Inc., which has since become part of Civitas Resources.

The expenditure eats into Broomfield’s revenue from the petroleum development it plays host to, she said, but is necessary to safeguard public health. Anderson said local residents have experienced everything from eye irritation to asthma to neurological issues as a result of volatile organic compounds from local wellheads.

“This is a burden that communities like Broomfield had to take on because the state and the federal government aren’t doing it for us,” she said.