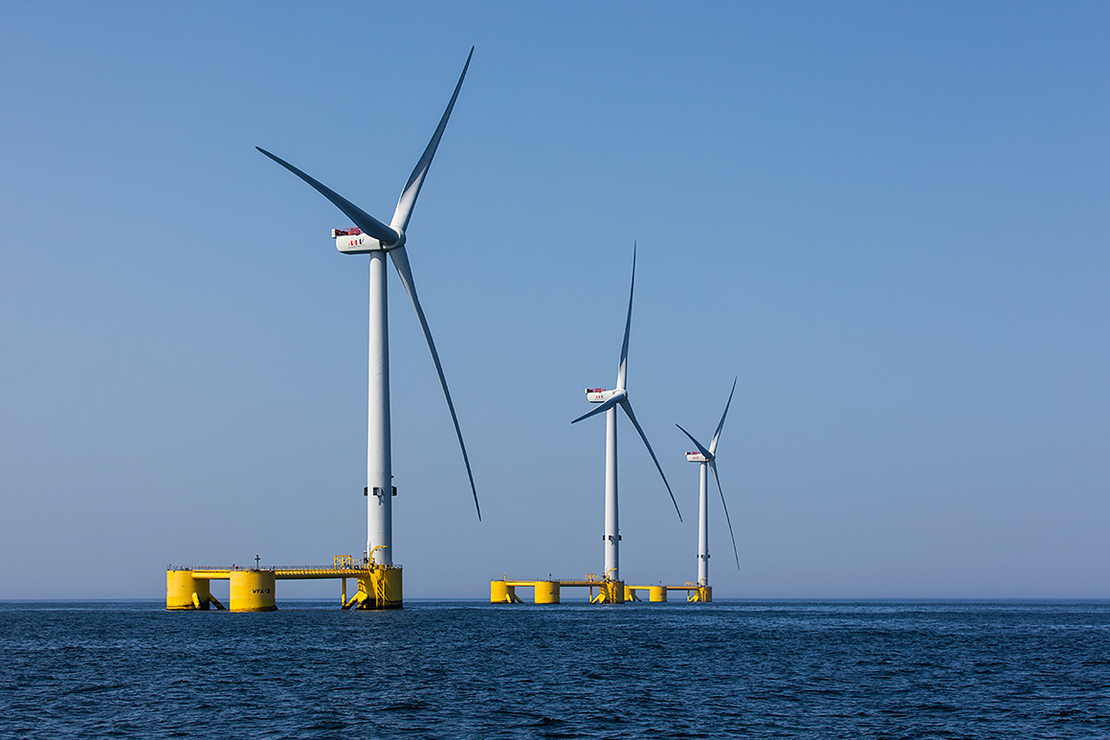 A company is proposing to build what could be the West Coast’s biggest floating offshore wind farm, suggesting the expansion of a technology that has yet to find footing in the U.S.

Known as Olympic Wind, the project’s outlines were presented by Washington-based Trident Winds in an unsolicited request for a federal lease in late March. The proposal could include up to 2,000 megawatts of electricity, enough for about 800,000 homes, produced from turbines mounted on platforms and moored to the deep ocean floor about 43 miles off the coast of Grays Harbor County, Wash.

Trident’s request, filed with the Interior Department’s Bureau of Ocean Energy Management (BOEM), envisions the first commercial-scale offshore wind project in Washington. At 2,000 MW, it would be larger than any publicly disclosed planned project on the West Coast if constructed.

The proposal mirrors an earlier request made by Trident Winds in California several years ago, which jump-started a broader competition among deep-pocketed developers for the rights to generate offshore wind power there.

With the filed proposal, BOEM can consider Trident’s request individually or decide whether it wants to put out a “request for interest” to assess whether other companies are also interested in building turbines off the coast of Washington. BOEM spokespeople told E&E News that the agency is reviewing the plan and will work with tribes, the state of Washington and others on the next steps.

Olympic Wind is likely to face scrutiny on a number of fronts, including from fishing interests; the Department of Defense; and possibly tribes like the Quinault Indian Nation, which spent years in talks with Trident and other developers over a separate offshore wind project that eventually fizzled.

Yet it underscores the growing expectations around a new, floating generation of offshore wind turbines, which have never been built in the United States, even at pilot scale.

Floating technologies would allow offshore wind to emerge in the Pacific coast’s waters, which quickly grow too deep to accommodate the more widely used fixed-bottom turbines. On the East Coast, the floating type could allow developers to harness faster wind speeds from ocean areas located far out of beachgoers’ sight, according to federal researchers.

If it proceeds as envisioned by Trident, Olympic Wind might also add to the Biden administration’s goal of developing 30 gigawatts of offshore wind by 2030. Trident is aiming to begin construction in 2028, with project operation beginning two years later.

Alla Weinstein, Trident Winds’ chief executive, said in a press release that the project would “harness our unlimited, carbon-free offshore wind resources for the benefit of all Washingtonians,” and promised to partner with locals to maximize community benefits.

In Washington, as in other Pacific states, offshore wind could play an important role in the energy transition, according to Weinstein. Most of the state’s population is located on the western coast, meaning that offshore power could feed into demand centers. Turbines would be most productive in the winter, when a changing grid is likely to hit its peak demand.

“Offshore wind is a very different profile compared to onshore. It actually corresponds and coincides very well with the demand profile,” she said in an interview

By 2030, Washington state’s utilities are required to get at least 80 percent of their electricity from carbon-free resources, followed by 100 percent in 2045, under the terms of a 2019 law. That is a less ambitious shift than many other states with a carbon-neutral goal: About 66 percent of Washington state’s generation in 2020 came from hydropower, according to the U.S. Energy Information Administration, and renewables were another 9 percent, with most of that coming from onshore wind.

Mike Faulk, a spokesperson for Democratic Gov. Jay Inslee, said in an email that the governor was aware of the project but “doesn’t have detailed information or a position at this point.”

But Inslee has in the past expressed support for offshore wind in Washington, including in 2014, when the Energy Department awarded a grant to Washington-based floating wind developer Principle Power Inc. for a prototype.

The governor said at the time that Principle’s project, slated for Oregon waters before being abandoned in 2016, represented “a world-leading advancement in wind energy” that could bring jobs and opportunity to the Pacific Northwest. Weinstein has also served as a gubernatorial appointee to the Washington Coastal Marine Advisory Council, which carries out ocean management planning for the state.

State governors have been major influences in the development of offshore wind on the East Coast by pledging to buy power from the resource. Washington state has no such commitment to purchase offshore wind power as of yet.

At present, the chief obstacle for offshore wind’s floating technologies is cost. The estimated price of electricity tends to be several times that of fixed-bottom technologies.

Outside the U.S., floating wind is gaining a foothold, however, in large part due to national pledges. By the end of 2020, about 79 MW of floating offshore wind was online globally off the coasts of Europe, Japan and South Korea. By 2026, South Korea wants to have 4.6 GW of floating turbines. The United Kingdom is aiming for at least 1 GW by 2030, and Taiwan is targeting 15 GW by 2035.

In the case of Olympic Wind, other interests are likely to jostle with Trident over the specifics of the project.

The commercial fishing industry in Washington state has already expressed doubts about offshore wind, with one association’s director warning last year that the technology “directly conflicts with fishing.”

Trident Winds’ proposal also noted that after an informal review with the Department of Defense, two small zones of its proposed development are located within military training routes.

It’s also unclear whether the grid would need to be significantly upgraded to accommodate the new load, although Weinstein noted that two proposed cable landings are located close to where a nuclear plant was once planned as a major resource, with enough grid capacity to handle that mothballed project’s power.

The Biden administration, meanwhile, has been preparing a flurry of actions for offshore wind. Earlier this year, BOEM held auctions for offshore leases in New York that drew a record-breaking $4.4 billion in winning bids (E&E News PM, Feb. 25). This spring, it plans to hold another lease auction in North Carolina (Greenwire, March 25).

And last week, it inched toward a lease auction in California, releasing a draft environmental review for three offshore areas that could hold an estimated 3 GW of power (Energywire, April 8).