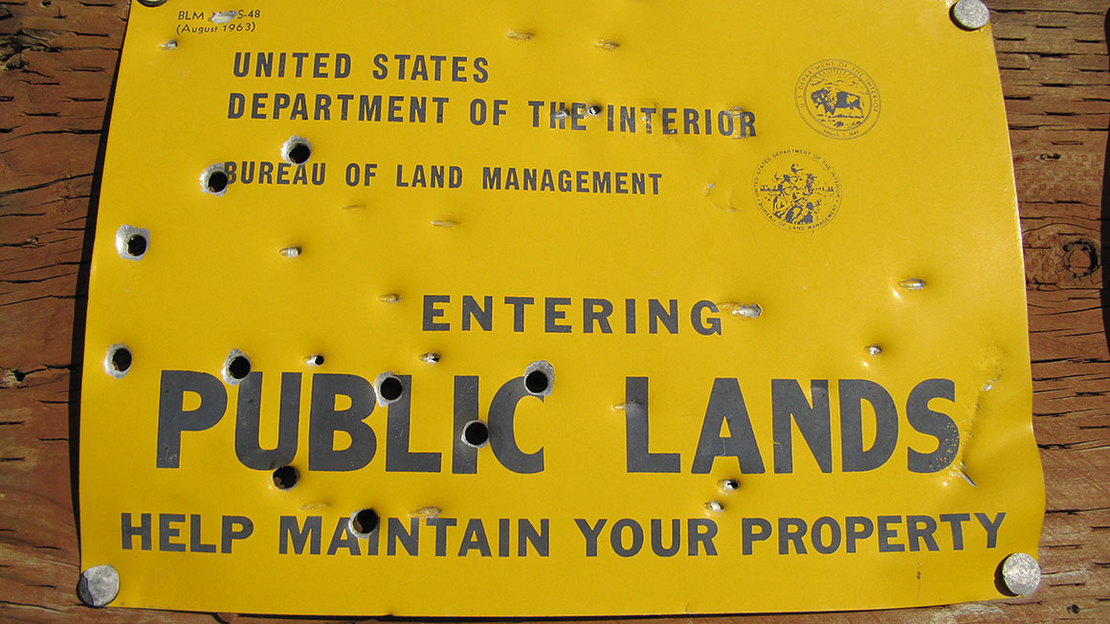 In this Dec. 3, 2009, photo, a public lands sign is shown with bullet holes in it at Bureau of Land Management site in Skull Valley, Utah. Mike Stark/AP Photo

Despite winning contracts for 1,200 acres of public lands across Utah in 2016 and even paying rental fees, Tempest Exploration Co. LLC ultimately lost its leases — because conservation activist Terry Tempest Williams admitted to the Bureau of Land Management that she wasn’t interested in actually taking oil out of the ground.

But now, amid the Biden administration’s push to conserve at least 30 percent of the nation’s lands, a coalition of researchers is arguing that Williams’ idea — a "nonuse" right — deserves a new look from the federal government (Greenwire, Nov. 17, 2016).

"What do you do in a landscape where there are a lot of existing resource rights that are already allocated? That’s certainly the case when you think of public lands in the West," said Shawn Regan, vice president of research at the Property and Environment Research Center.

In a new analysis published in the journal Science, researchers from Montana-based PERC along with the Environmental Defense Fund, the Hoover Institution, the National Bureau of Economic Research and several universities, call for an overhaul of laws and regulations that mandate the "productive use" of public lands.

"As a society, we place value on different things than we did at the time when these institutions were being created," Regan told E&E News, referring to laws like the Mineral Leasing Act of 1920 and the General Mining Act of 1872.

"These are really old laws and really old institutions, and they made a lot of sense at the time they were created for these often narrow purposes, but the way in which they kind of intersect with today’s social values and environmental demands often creates tensions," he added.

Under existing laws, companies and individuals who lease public lands, stake mining claims or hold grazing permits must exploit those assets or risk losing their rights to use the public lands.

Instead, Regan and his co-authors argue, the government should consider the creation of a "nonuse" right, or the ability to purchase an oil or gas lease, grazing permit or timber contract without having to actually extract or harvest the resource.

"Efficient resource management requires a more modern interpretation of natural resource ‘use,’" the authors wrote. "Changing values, better scientific information about goods and services provided by intact eco-systems, and income growth have fueled new demands for conservation on public lands that are not formally classified as protected."

The proposal would require that Congress amend laws or agencies reinterpret regulations to expand "productive use" to include conservation — something that researchers argue could occur as part of the Biden administration’s ongoing review of the federal oil and gas leasing program (Energywire, Aug. 25).

An Interior Department spokesperson did not respond to a request for comment about the proposal.

When the Interior Department halted lease sales earlier this year ahead of that review, it detailed "stockpiled" leases on more than 26 million acres of public lands, including 13.9 million acres of unused or nonproducing leases.

The Center for Western Priorities argued in a report earlier this year that some 10.4 million acres of public lands occupied by those idle leases could be used for conservation or recreation purposes (Greenwire, Feb. 19).

But Center for Western Priorities Deputy Director Aaron Weiss told E&E News this week that adapting current leasing laws to allow for "nonuse" would not achieve the "massive reforms that are necessary."

"Until we rebalance the idea of ‘multiple use’ to fully account for the costs that our kids and grandkids will bear for today’s unbridled extraction on public lands, proposals like this are an attempt to put a Band-Aid on a gunshot wound," Weiss said. "Letting conservation groups buy out ranchers or drillers is not a substitute for proper land management policies that reflect our climate reality."

The PERC-led analysis acknowledges that incorporating "nonuse" rights would not be an instant panacea for public lands or the communities that surround them.

"Market-based policies can have unintended consequences if not approached with care," the report states. "In the case of public lands, nonuse rights could create challenges for communities and industries that are reliant on activities related to drilling, grazing, or logging operations by reducing regional demand for labor and inputs associated with these activities."

In addition to those economic impacts, and the potential loss of royalty income to the state and federal governments, the authors also highlight the potential for social shifts.

"Large-scale buyouts for conservation could bring substantial economic and cultural shifts for some communities, and nonuse rights should be designed and implemented in ways that address the concerns of existing stakeholders," the report states.

The proposal’s authors likewise acknowledged that nonuse in some areas — such as those current reserved for grazing or timber harvest — could complicate wildfire mitigation measures, and make it necessary for lessees to agree to meet management goals.

But Western Energy Alliance President Kathleen Sgamma argued that such a program would inevitably fall short.

"The oil and natural gas industry funds $2.8 billion in conservation annually, per the Great American Outdoors Act," Sgamma told E&E News, pointing to the income largely generated by oil and gas royalties, and used for programs including the Land and Water Conservation Fund.

She continued: "I’ve seen no evidence that the environmental lobby would be interested in replacing that revenue for conservation, much less the total $9 billion our industry pays into the Treasury each year from federal royalties and leasing fees."

Sgamma conceded credit to a single organization, the Nature Conservancy, a nonprofit group whose work to protect land includes direct purchases as well as securing easements. According to the nonprofit, it has protected more than 119 million acres of land over a six-decade span.

But Sgamma also pushed back against the idea of allowing oil and gas leases to intentionally idle, arguing that Congress and the president already wield significant powers to set aside public lands for conservation.

She pointed to Congress’ authority to designate wilderness areas — the most restricted classification for public lands, barring motorized vehicles and limiting activities like grazing — as well as to create national parks.

The president likewise has authority under the Antiquities Act of 1906 to set aside public lands as national monuments, in order to preserve areas of cultural, historic or scientific interest.