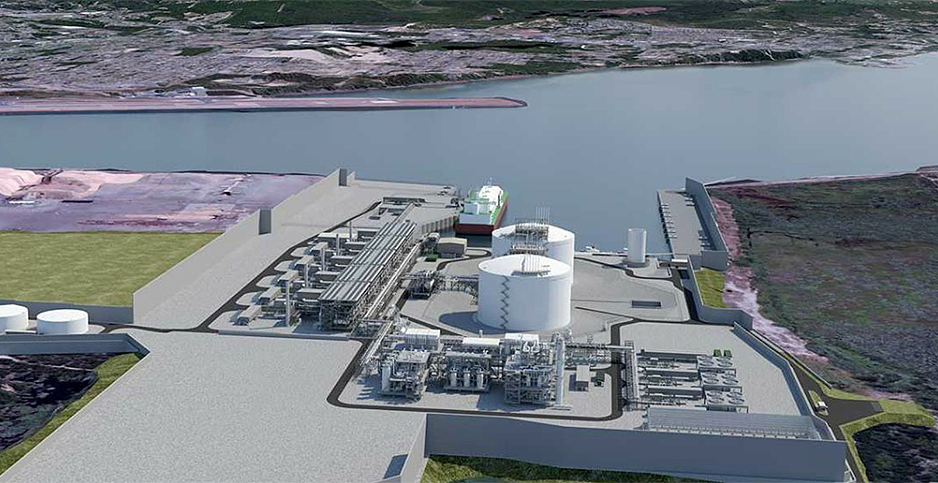 A federal appeals court yesterday appeared prepared to send energy regulators back to work on an approval for an embattled Oregon liquefied natural gas export facility.

During a 3 ½-hour hearing yesterday, the U.S. Court of Appeals for the District of Columbia Circuit examined whether the Federal Energy Regulatory Commission had done an adequate job of supporting the use of eminent domain for a 230-mile pipeline associated with the Jordan Cove LNG export terminal and whether the agency had properly analyzed the project’s climate impact.

The proposed facility in Coos Bay, Ore., has been on hold since developer Pembina Pipeline Corp. said in April that it would suspend all work on the project after the company failed to obtain state permits. The Canadian firm has yet to say whether it plans to restart construction on the facility, which would ship gas from western Canada to Asian markets.

Judges for the D.C. Circuit appeared skeptical that FERC had justified its delegation of federal eminent domain power to acquire land for a pipeline that would not carry domestically produced gas or serve U.S. customers.

“We have a different animal here, that 100 percent of this gas is exported,” said Judge Ketanji Brown Jackson. She later added: “Cases that talk about domestic need don’t quite seem to fit. They don’t address this pipeline.”

The D.C. Circuit has previously asked FERC to explain why it was legal for the agency to delegate its federal eminent domain authority to the developer of the Nexus pipeline, which carried much of its gas to Canada. The Natural Gas Act allows FERC to convey its eminent domain power for interstate pipelines but not international projects (Energywire, Sept. 9, 2019).

Niskanen Center attorney David Bookbinder, who represented landowners affected by the project, argued that the case provided the court an opportunity to rule on whether a pipeline for an LNG export facility can use eminent domain power.

“This has far less justification than other pipelines,” he said, noting that the Jordan Cove facility had failed to secure any customers over the last eight years.

At minimum, Bookbinder said, the court should block FERC’s certificate for the project as the judges consider the case and Pembina weighs its options. He added that landowners had been living with the threat of Pembina using its eminent domain power for the past 15 years.

“They have been thinking about this pause now for eight months,” Bookbinder said. “Is it going to take another year, another two years? We don’t know.”

Judge Judith Rogers expressed sympathy for the property owners, noting that the D.C. Circuit has been concerned with the way FERC has handled landowner complaints. She also acknowledged FERC’s limited options after approving the certificate.

“FERC does not have the authority to grant the type of relief they want other than set aside the certificate,” said the judge, a Clinton appointee.

The commission cannot pause a certificate while a legal challenge to the approval is pending, said Susanna Chu, an attorney for FERC.

She urged the court to either dismiss the challenge on procedural grounds or freeze the litigation while FERC’s certificate is on hold.

“That would eliminate any potential harms,” she said.

Chu pushed back against arguments that the project would not help domestic markets, noting that there was a possibility that natural gas producers in the Rocky Mountain production area could use the proposed infrastructure.

She also noted that the Energy Department had signed off on the Jordan Cove LNG export project.

Jackson, a Biden appointee, questioned how DOE’s assessment of the project should be weighed alongside FERC’s requirement to consider market demand. She called DOE’s approval “a factor” for FERC to consider in approving the project.

“Part of the standard for review is whether FERC had said enough to actually justify this pipeline,” Jackson said to Chu. “You said a lot of things that are slightly different or more fulsome than what FERC said. I’m wondering whether we should send it back at least for a more comprehensive explanation.”

Judge Robert Wilkins asked whether the Oregon pipeline could be deemed an interstate project if it does not cross state lines.

“Part of the rationale, because the pipeline interconnects with other pipelines, is this is an interstate project, but as you point out, there are no precedent agreements to demonstrate the gas will actually be used,” said the judge, an Obama appointee.

Bookbinder, the landowner attorney, replied: “The precedent agreement is with the pipeline and the LNG terminal. There is no commitment as to gas.”

The challengers also compared Jordan Cove to the Environmental Defense Fund’s recent challenge to the FERC certificate for the Spire STL pipeline in Missouri. In that case the D.C. Circuit had tossed out the certificate after finding that FERC had relied on a single precedent agreement with an affiliated utility, and found evidence of self-dealing (Energywire, June 23).

Like the recent Spire case, Bookbinder said, FERC balanced the harms of the project in a single statement without any analysis.

But Chu maintained the circumstances were different because the court had identified plausible evidence of self-dealing.

“It was a very different type of contract; it was a pipeline and utility with captive retail customers,” she said.

Jordan Cove opponents also argued that the court should toss out FERC’s certificate and send it back to the agency for numerous violations of the National Environmental Policy Act — including a failure to consider a scenario in which the project is not built and for not fully studying the project’s climate impact.

FERC has recently faced legal scrutiny for falling short on its analysis of climate impacts in its NEPA reviews of natural gas projects.

The commission found in its NEPA review of the Jordan Cove project that the terminal would have minimal environmental impact because if it were not built, another LNG facility would take its place.

“There is no support that if this project is denied that another project will be built in its place,” said Sierra Club attorney Nathan Matthews, who argued on behalf of environmental challengers in the Jordan Cove litigation.

He also noted that FERC could have used Oregon’s emissions reductions targets to help assess the relative harm of the project or used another method like the social cost of carbon, but had chosen not to.

The state target would reduce greenhouse gases 75 percent below 1990 levels by 2050.

Chu, the FERC attorney, acknowledged that Jordan Cove would account for 15.3 percent of the emissions reduction goal if it was built, but she said the commission had found the targets could not “be objectively used.”

Jackson asked whether FERC had a “blanket policy” of not addressing greenhouse gas impacts.

Matthews noted the commission had only reached a determination in one case that he knew of, where the emissions were small.

“FERC is refusing to answer the question at all,” Matthews said. “FERC can’t just refuse to do anything, [but] that is what FERC has done.”