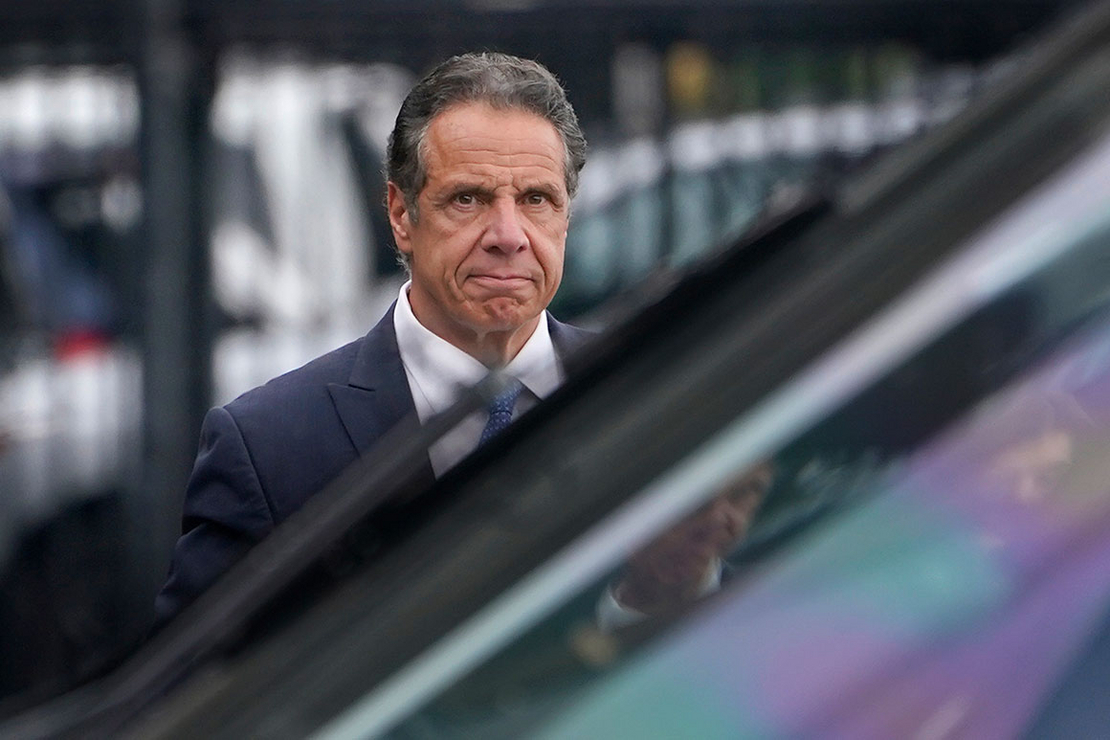 New York Gov. Andrew Cuomo (D) prepared to board a helicopter after announcing his resignation yesterday in New York. He says he will resign over a barrage of sexual harassment allegations. AP Photo/Seth Wenig

The resignation of New York’s Democratic governor, Andrew Cuomo, yesterday is stirring questions about the state’s energy future as it seeks to carry out one of the nation’s most ambitious climate laws.

Cuomo, who signed a 2019 law committing New York to net-zero greenhouse gas emissions by 2050 and 70% renewable power by 2030, said yesterday that he would step down in 14 days. It came after a state investigator published a report concluding that he had sexually harassed 11 women, including nine state employees and one employee at utility National Grid.

His departure will allow Lt. Gov. Kathy Hochul, a former congresswoman without much of an independent record on state energy policy, to step into the helm — making her New York’s first female governor.

While policy experts cited few reasons to believe the transition would result in an immediate swing in state climate and clean energy policy, much of the hardest and most contentious work lies ahead for New York’s pledges to reach net zero, raising questions about Hochul’s positions.

By year’s end, for example, officials and outside advocates who sit on a 22-member Climate Action Council have to publish a "scoping plan" that will serve as the defining road map for the net-zero and renewable power targets.

The council is currently debating whether that road map will include wide-ranging policy recommendations from six advisory panels, including calls for banning new fossil fuel generation, phasing out natural gas use in new buildings, and an all-electric sales mandate for cars and trucks.

The recommendations may need the governor’s embrace in order to become reality, said Anne Reynolds, executive director for the Alliance for Clean Energy New York and a member of the council.

"There are a lot of ambitious and controversial things that New York will need to do" to fulfill its climate goals, she said. "Those things can be in the scoping plan, but they won’t reach the point of being concrete policies unless there’s a governor that takes up that leadership. … They will definitely require new decisions from the new governor."

One type of policy that could gain new traction, with Cuomo gone, are carbon price and carbon tax schemes, according to observers.

One version proposed by the New York Independent System Operator (NYISO) and rejected by Cuomo would incorporate a carbon price into the wholesale market price of certain types of electricity. Hochul has not offered a public stance on the idea, noted analysts at ClearView Energy Partners LLC in an afternoon note yesterday.

But the majority of commissioners at the Federal Energy Regulatory Commission would likely approve that plan, if NYISO’s grid operators submitted it to them, argued ClearView. Cuomo’s resignation might therefore remove "the most significant roadblock" to that policy’s enactment, analysts wrote.

A rival proposal that came out of the Democrat-controlled Legislature would enact a $55-per-ton fee on industrial facilities’ greenhouse gas emissions, and channel the funds toward climate programs for front-line communities.

That idea failed last year in the Legislature, but could emerge again. It was backed in the last session by NY Renews, a 200-group environmental coalition that helped draft and pass the state’s main climate law, known as the Climate Leadership and Community Protection Act.

NY Renews was among the chorus of Cuomo opponents who welcomed his resignation yesterday, calling him "a bully and an abuser" who "talked the talk but did not walk the walk" on climate justice.

Cuomo’s resignation yesterday after more than a decade in office came as part of a defiant speech in which he blamed "generational and cultural shifts" and dismissed the most serious accusations against him as "untruthful" and "politically motivated.”

"This situation by its current trajectory will generate months of political and legal controversy. That is what is going to happen. That is how the political wind is blowing. It will consume government," he said, in explaining his decision to step down.

Under his watch, he added, "we made New York state the progressive capital of the nation."

One law that emerged from Cuomo’s office and passed last year made it harder for locals to block renewable projects, and streamlined permitting processes for developers. Among the nation’s most aggressive pro-renewable measures, it was received with indignation by conservatives in rural areas and prompted a lawsuit from citizen groups against the state.

Spokespeople for Sensible Solar for Rural New York, a group that opposed Cuomo’s siting law, said in a statement yesterday that it looked forward to engaging with Hochul, saying she "has the opportunity to put an immediate end to the Cuomo-era wild west of renewable energy siting."

In 2019, Cuomo also blocked a proposed gas pipeline that would have crossed New York Bay, and supported the shutdown of the Indian Point Energy Center out of concerns it could threaten New York City (Greenwire, Aug. 10).

Some former Cuomo officials and environmental justice groups who often warred with the governor said on background that they thought Cuomo’s departure might give a lift to their more left-leaning climate proposals.

Noah Shaw, a partner at Foley Hoag’s Energy & Climate practice and a former general counsel at the New York State Energy Research and Development Authority under Cuomo, predicted that Democratic legislators and their green allies will have "a better partner in Kathy Hochul," he said. "You may well see progress on some stuff that stalled in the past.