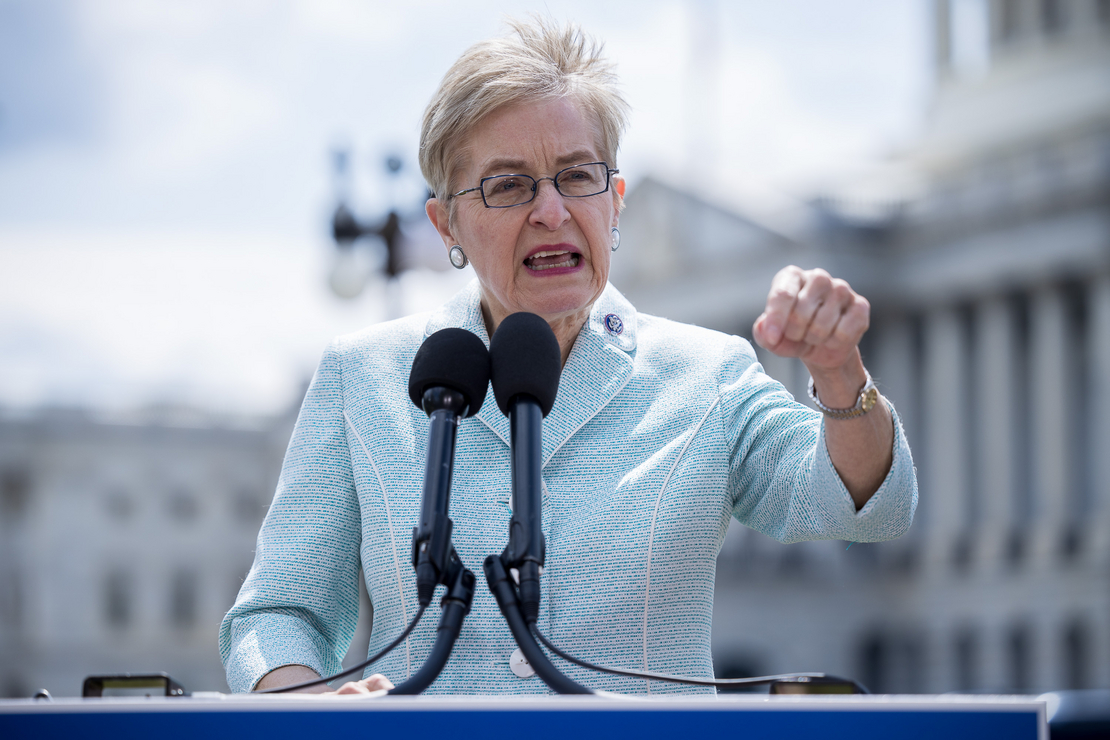 On Monday, Biden announced that he would invoke Defense Production Act powers to help scale up domestic manufacturing of solar panels and other clean energy technologies ranging from electric heat pumps to hydrogen electrolyzers.

“The use of the Defense Production Act is an excellent first step, but it’s not a magic wand,” said Sen. Brian Schatz (D-Hawaii), a member of the Appropriations Committee. “We’re gonna have to follow along with appropriations and oversight.”

On Tuesday, Energy Secretary Jennifer Granholm said in a visit to a Maryland solar farm that DOE would likely need funding to follow through on the president’s wishes, especially to make direct purchases from domestic solar producers.

Rep. Marcy Kaptur (D-Ohio), chair of the House Energy and Water Development Appropriations Subcommittee, said she is open to and working through funding options with Granholm.

“I am working with the secretary of Energy on that right now,” Kaptur said.

“We are looking at exactly that question,” said Van Hollen when asked about finding the president’s Defense Production Act order. “We’ve been talking mostly internally now, but we’ll have conversations with [Granholm].”

Lawmakers said they haven’t gotten into the specifics on mechanisms or bottom-line numbers but said that they’re open to additional set-aside language in a future appropriations bill.

Heinrich said he wants appropriators to focus not just on DOE funding, but on how other agencies affected by the Defense Production Act could help clean energy adoption.

“[We should] not just look at it as a DOE issue,” said Heinrich. “We need the General Services Administration fully engaged on how to use this tool to speed up adoption of technologies like heat pumps.”

The president earlier this year also invoked the Defense Production Act to promote mining for clean energy technologies. The Ukraine aid supplemental bill in response to Russia’s invasion of the country included roughly $600 million for the effort (E&E Daily, May 11).

Simmering under the surface of negotiations, however, is continued frustration among some Democrats with the White House’s decision to issue a 24-month waiver on new tariffs for solar products imported from Southeast Asia.

The Commerce Department is studying whether China is avoiding duties by shipping solar components through several other Asian nations. The probe’s result could have been hefty new tariffs.

Many Democrats have spent weeks lamenting the investigation, with the Solar Energy Industries Association claiming significant setbacks for renewable energy growth because of higher import costs. But other Democrats have defended the need to protect U.S. manufacturers.

“I made [the Biden administration] aware that they stepped on some toes and need to measure over,” said Kaptur, who said the plan “might not be successful” because the White House had failed to involve some of the United States’ largest solar companies, including First Solar in Ohio.

Kaptur said easing tariffs favors West Coast companies that import solar panel parts from China and other Asian nations. She said First Solar manufactures all its parts in the United States and is hurt by cheaper imports from Asia.

“Rebuilding American manufacturing requires both government support and the assurance that predatory, state-subsidized foreign industries won’t be able to cheat with impunity,” he wrote in the statement.

Congressional funding for the Defense Production Act will likely need united support from Democrats, with Republicans expressing significant hesitation for government solar funding in the past.

Some Democrats could soften their stance if major funding for domestic solar manufacturers through the Defense Production Act is on the table.

Sen. Sherrod Brown (D-Ohio) has voiced frustration with the administration’s tariff decision, but said he is now looking forward to supporting the Defense Production Act and other opportunities to help domestic solar manufacturers compete with China.

“The tariff decisions is the tariff decision; we’ll figure it out,” said Brown. “But it’s going to mean major investments, and it needs to be quick, because the industry has been devastated by China.”