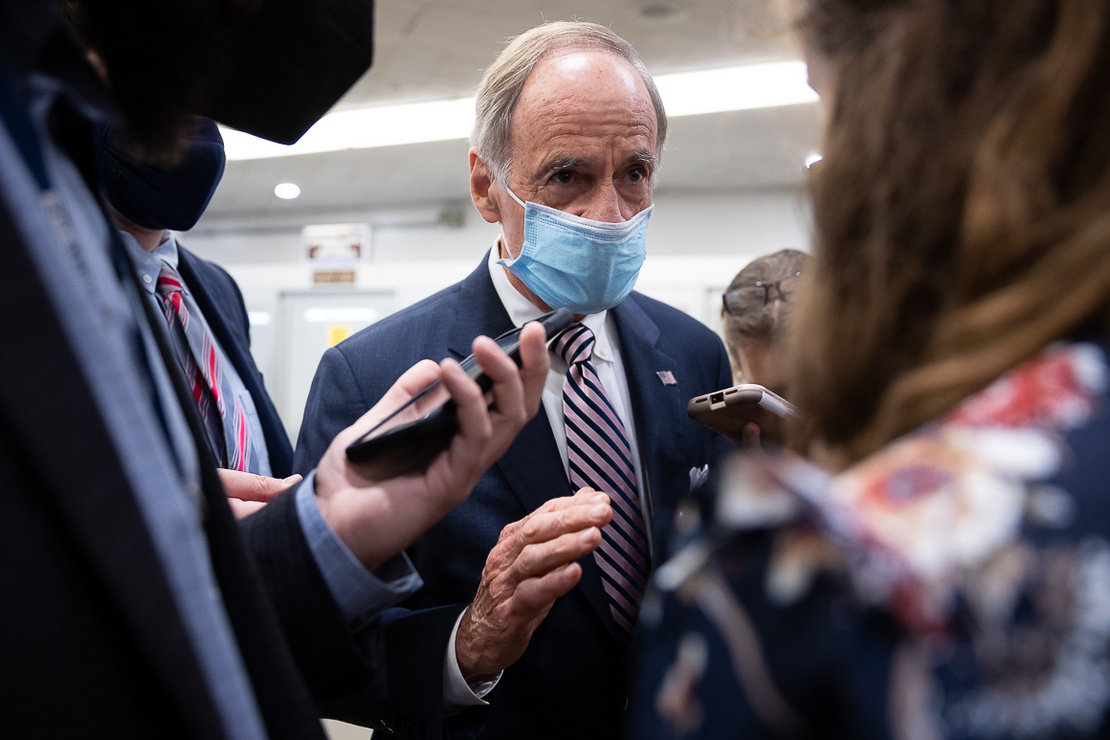 When congressional Democrats and the Biden administration launched their multitrillion-dollar infrastructure push earlier this year, support grew quickly on Capitol Hill for the creation of a new Civilian Climate Corps.

Modeled after the New Deal-era Civilian Conservation Corps, the green jobs placement and training program was widely embraced on both sides of the Capitol by Democrats of all political stripes, as well as President Biden.

But despite its popularity, funding for the CCC and other programs remains an open question in the delicate reconciliation push.

With the White House negotiating the broader reconciliation bill downward from its current $3.5 trillion price tag to a level acceptable to Sens. Joe Manchin (D-W.Va.) and Kyrsten Sinema (D-Ariz.), sources close to the talks say Democrats are wrestling with how to best prioritize spending on climate given that the reconciliation package is expected to shrink by as much as a third — and possibly more.

The reality of a smaller bill is prompting new scrutiny for the suite of policies under consideration for reconciliation. The CCC, environmental justice provisions and lead pipe mediation, among other proposals, could fall victim to Democratic priorities on climate deemed most essential — specifically, those that target emissions cuts.

Backed by like-minded advocates, progressives initially called for more than $130 billion to launch the climate-focused jobs program. That lofty ask was scaled down to $30 billion last month (E&E Daily, Sept. 22).

The House ultimately funded the CCC at $10 billion, and while the Senate is said to favor at least a $30 billion allocation, key supporters said yesterday that figure is likely to further shrink amid the haggling over the cost of the reconciliation package.

Sen. Sheldon Whitehouse (D-R.I.) acknowledged the dilemma yesterday. “Emissions reduction, obviously, is the goal we need to achieve for the sake of safety,” he told E&E News. “To be clear, I support a Civilian Climate Corps. It just doesn’t measurably reduce emissions.”

Compounding matters is uncertainty over the Clean Electricity Payment Program (CEPP) — a central feature of meeting Biden’s emissions reductions goals — as well as a long-shot bid to institute a carbon pricing and border adjustment scheme. Amid the uncertainty over a topline, Democrats also fear that other environmental ambitions, including ambitious environmental justice funding targets and Biden’s goal to replace all lead pipes, may be on the chopping block as well.

Senate Majority Leader Chuck Schumer (D-NY.) conceded yesterday Democrats would have to make a series of trade-offs to get the package passed. 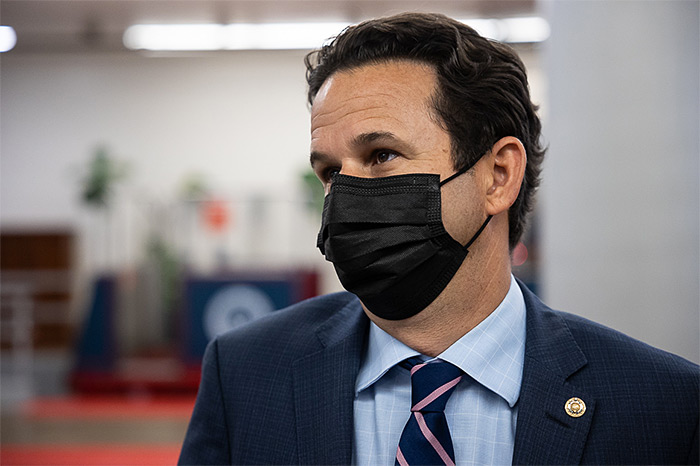 Amid anxiety about which programs could fall to the wayside when the topline number for the reconciliation package gets lowered, Collin O’Mara, president and CEO of the National Wildlife Federation, predicted that climate provisions dealing with emissions reductions would largely be spared.

“There’s unprecedented alignment on climate priorities across the entire Democratic caucus,” he said.

Democrats on the Senate Finance Committee maintain that the scope of the clean energy tax package is nonnegotiable.

“The greatest challenge we face on the planet right now is climate change,” Sen. Tom Carper (D-Del.) said yesterday. “And we have to make sure that final package we produce addresses it aggressively and in a comprehensive, thoughtful way. I’ll just leave it at that.”

O’Mara told E&E News yesterday that staff-level discussions between the House Ways and Means Committee and Senate Finance were in the final stages of “harmonizing” both panels’ visions for clean energy tax credits.

The “Growing Renewable Energy and Efficiency Now (GREEN) Act,” H.R. 848, championed by Ways and Means Chair Richard Neal (D-Mass.) and the centerpiece of his committee’s portion of the House’s reconciliation package, came in with a lower price tag over 10 years than expected, according to an estimate from the Joint Committee on Taxation.

This lower “score” of $235 billion over a decade makes it more likely the full set of clean energy tax credits will survive the reconciliation package’s topline number decreasing down to the $2 trillion range, O’Mara said, while also incorporating elements of the clean energy tax framework favored by Finance Chair Ron Wyden (D-Ore.). Wyden’s proposal was estimated to cost around $300 billion over 10 years.

Sen. Ben Cardin (D-Md.), a senior member of Finance, said clean energy tax incentives may be “one of the differentials that allows us to do a little bit more” if the topline shrinks.

But the CCC is drawing new scrutiny amid fears of a smaller package. It’s a top priority for many Democrats and the Biden administration, said one source close to the negotiations, but its goals have “less to do with mitigating the most catastrophic impacts of the climate crisis and more to do with employment opportunities and longer-term progressive economic goals.”

“If the climate crisis is one of the most existential threats to our way of life, shouldn’t we be focusing every climate dollar to lessening those impacts?” the source asked.

But CCC supporters aren’t backing down.

“I think that’s a false choice. I think we can do both,” Sen. Brian Schatz (D-Hawaii) said of investments into policies like the CCC and curbing emissions.

Sen. Martin Heinrich (D-N.M.), a strong supporter of the CCC, ticked off a list of environmental activities envisioned for the program, including wildfire mitigation, carbon benefits and improved water quality.

“We just have a lot of restoration projects where putting people to work on the landscape has stacked benefits,” he said in an interview, noting the “incredible fire impacts that we’re all living through in the West.”

Sen. Chris Coons (D-Del.), who had pushed the CCC for months, said yesterday that there’s support for $30 billion in both chambers and the White House but acknowledged that figure may shrink in negotiations.

“My strong impression is that we will come to an agreement much closer to $30 billion than $10 billion,” he said in an interview.

Coons also dismissed a comparison between the CCC and other emissions reductions policies under consideration.

“I think in order to combat climate, people need to see the work being done in their communities,” he said. “And we need to do emissions reductions. So I don’t think it’s an either/or. I think we can achieve dramatic emissions reductions with a price on carbon, which actually then is rebated overwhelmingly to the average American family.”

A source in the advocacy community close to the negotiations tempered expectations about funding for the CCC, saying that the number is likely to go down to $10 billion or $15 billion as the reconciliation’s larger price tag also shrinks.

That figure would still be in keeping with Biden’s original “Build Back Better” platform that called for a $10 billion CCC — and this advocate called this level of investment “solid” — but many Democratic champions are expected to keep fighting for more.

“Ensuring the CCC is included in the final bill remains the congressman’s No. 1 priority,” said Sally Tucker, a spokeswoman for Rep. Joe Neguse (D-Colo.), one of the Civilian Climate Corp.’s biggest advocates on Capitol Hill.

Ultimately, O’Mara said, “if any climate provision gets knocked out, it will likely be for politics or the parliamentarian, rather than price tag,” referring to the Senate’s arbiter of which line items in the reconciliation package do and do not comply with the chamber rules governing the reconciliation process.

Just yesterday, another Democrat — Sen. Catherine Cortez Masto of Nevada — was exerting her will on the equation. At a Senate Energy and Natural Resources Committee hearing on federal mining programs, she took direct aim at the House’s interest in imposing royalties on new and existing hardrock mining, arguing it would cost the industry “thousands of jobs across the country.”

‘There’s concern about all the programs’ 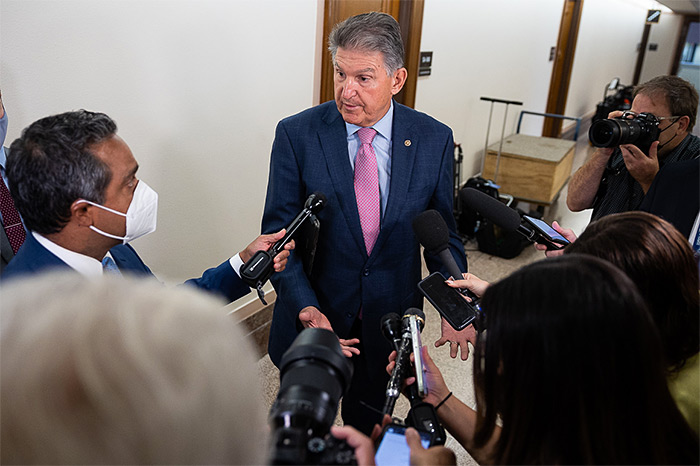 The shrinking topline is creating some uncertainty, however, because Democrats don’t know whether it might leave other environmental programs on the chopping block or lead to across-the-board cuts.

With top negotiators now eyeing an overall spending number around $2 trillion, most of the climate and environmental spending programs laid out in the House reconciliation bill, including the $27.5 billion green bank, environmental justice programs, and cash for energy efficiency and clean vehicles, could be on the table for trims.

“There’s concern about all the programs that are in there, which ones are going to get cut,” said Sen. Ben Cardin (D-Md.), a senior member of the Environment and Public Works and Finance committees. “There’s a view of whether there’s going to be a haircut or whether they’re going to be pulling programs down. We just don’t know right now.”

Environmental justice could be a vulnerable area. The White House has said it hopes to send Biden to climate talks in Glasgow, Scotland, next month to boast passage of a reconciliation bill that helps fulfill the administration’s pledge to reduce emissions 50 to 52 percent by 2030, compared to 2005 levels. And efforts to realize those goals could take precedence over other spending.

Sen. Tammy Duckworth (D-Ill.), another member of EPW, said she’s concerned about the fate of the tens of billions of dollars for environmental justice programs in the House bill and investments in lead service line replacement.

The House reconciliation package includes $30 billion for lead pipe removal. With the $15 billion already contained in the bipartisan infrastructure bill, that would help meet the White House’s initial $45 billion proposal for lead.

Duckworth fought off similar cuts when a snafu over lead funding nearly derailed the bipartisan bill before it passed the Senate this summer. The Illinois Democrat said she would be pushing hard to keep at least $30 billion in the reconciliation bill.

“I’m very worried that could get trimmed, and this is something that I will stand and fight for,” Duckworth said in an interview.

Duckworth, a co-founder of the Senate Environmental Justice Caucus, said she would make a straightforward argument for environmental justice programs. "These are the most vulnerable people, and this is long overdue,” she said.

Neglecting those priories, O’Mara said, could also jeopardize Biden’s other commitment: the Justice40 Initiative, a promise to deliver at least 40 percent of the overall benefits from federal investments in climate and clean energy to disadvantaged communities.

Cuts to the reconciliation package’s topline, O’Mara said, “cannot come at the expense of front-line communities and people’s health.”

The West Virginia Democrat has repeatedly voiced opposition to the $150 billion program, which proposes to offer grants to utilities who deploy 4 percent more clean energy each year and fine those who do not.

Manchin suggested yesterday he’s open to negotiations, but he has been less clear on exactly what changes he would make to the CEPP to accommodate fossil fuel generation and carbon capture.

“We can’t throw caution to the wind on reliability, that’s all I’m saying,” Manchin said in an interview. “And I’m not going to put my state or my country in jeopardy of not having the power that we need to take care of ourselves and keep our families healthy, but also the jobs that we need. We’ll work through all this.”

The advocacy source close to the negotiations characterized the CEPP’s survival as a “50-50” proposition given Manchin’s opposition and questions about whether it adheres to reconciliation rules. As negotiations move forward, Democrats may have to concede to Manchin’s insistence that carbon capture technology extends to coal.

The CEPP, as currently structured, is technology-neutral, but it would define clean energy as having emissions under 0.1 metric ton of carbon dioxide equivalent per megawatt-hour. That excludes natural gas without carbon capture, and it’s a target that could potentially be up for negotiation.

While some Senate Democrats continue to push a carbon tax, the source said that idea is being considered largely as an alternative if they can’t reach a deal with Manchin on the CEPP.

It’s not clear that would fly in the House, with Wyden and Neal still at odds overt tax policy, but the Senate Finance chairman insisted yesterday that carbon pricing remains central to his climate plans.

“I feel very strongly that the way you deal with climate, and you bring about the changes in the economy, is you do it with taxes and prices,” Wyden told reporters.