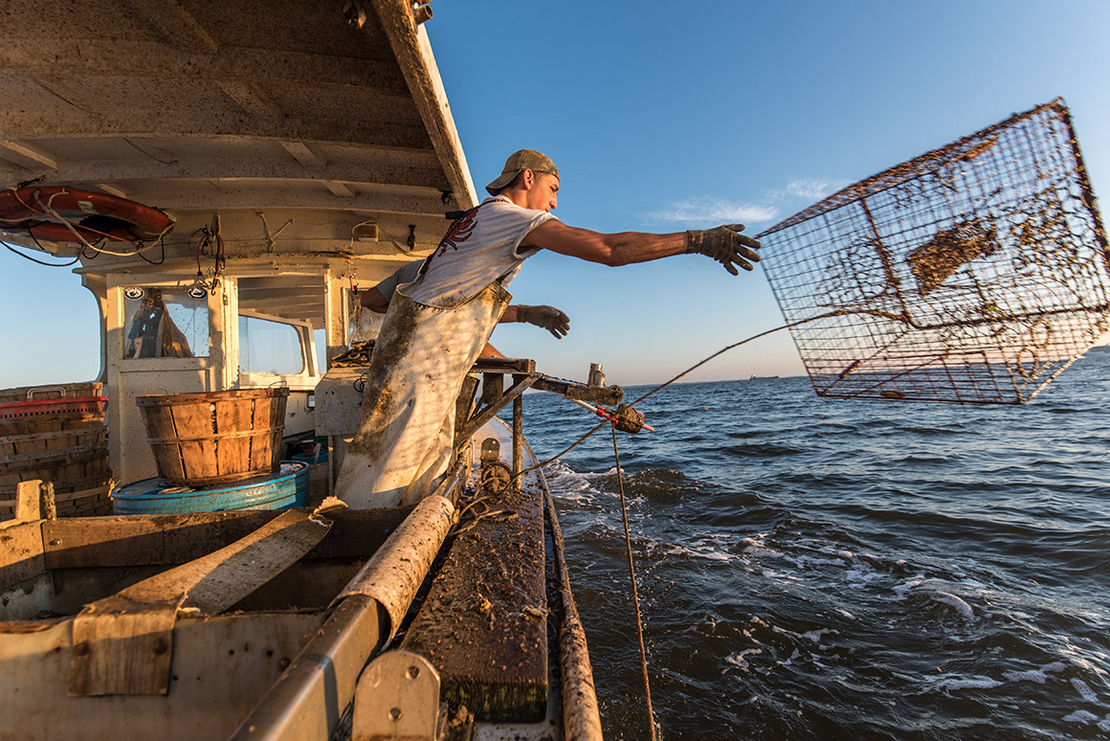 A waterman throwing a crab trap into the Chesapeake Bay. Edwin Remsberg / VWPics/Newscom

Staggeringly high amounts of “forever chemicals” contaminate groundwater near multiple military sites along the Chesapeake Bay, posing a threat to public health and the environment.

Documents from the Department of Defense obtained by the Environmental Working Group show levels of PFAS, or per- and polyfluoroalkyl substances, ranging from 0.8 million to 2.2 million parts per trillion across nine installations in the area. The findings, first circulated today, offer some insight into the extent of PFAS contamination along the Chesapeake Bay, the country’s largest estuary and a major fishing area.

“These are some of the highest in the country,” EWG policy analyst Jared Hayes, the report’s author, said in an interview with E&E News.

While Hayes said the data from the Chesapeake Bay area is “a local example of a national problem,” he added that the concentration of military bases there has dire implications.

The bay’s 64,000-square-mile watershed crosses six states and the District of Columbia and is home to more than 17 million people, as well as prolific ecosystems that support more than 3,600 species of plant and animal life.

EWG warned in its announcement of the findings that the presence of so much PFAS in groundwater poses an immediate threat for wildlife, including crabs, oysters, rockfish and striped bass. Humans who consume those animals are also at risk, with no federal guidelines currently available regarding a safe level of PFAS consumption.

“We suspect that most folks have no idea that [seafood they catch] may be contaminated with PFAS,” said Scott Faber, who leads EWG’s government affairs work.

The most contaminated site is Langley Air Force Base, in Hampton, Va., according to remedial investigation documents showing high levels of chemicals including PFOA and PFOS. Those compounds have been phased out of U.S. production over health concerns, as they have been linked to cancer, kidney disease and other severe effects. EPA currently has a nonenforceable drinking water health advisory in place for PFOA and PFOS of 70 ppt. Parts of the Langley site had nearly 32,000 times that amount of PFOS alone.

Other military sites with contamination near the Chesapeake Bay include:

Records indicate there may be PFAS contamination at seven other sites near the water body, but the Pentagon has seemingly not tested for the chemicals there yet.

Defense installations have significant PFAS contamination due in no small part to decades of aqueous film forming foam, or AFFF, use. Long used for both practice and actual crisis scenarios, the foam has led to widespread contamination, both on bases and in nearby communities.

A DOD spokesperson directed E&E News to one website laying out how the military is addressing PFAS contamination, along with another recently launched site detailing cleanup actions. The department offered no further comment on EWG’s report.

The Chesapeake Bay and its surrounding area have grappled with PFAS in seafood for some time. A 2020 study from Public Employees for Environmental Responsibility found 36 types of PFAS in striped bass from the Potomac River and oyster and crab from St. Inigoes Creek nearby.

In 2019, the U.S. Food and Drug Administration tested for 16 PFAS in foods from eight mid-Atlantic states, detecting PFOS in half the seafood sampled. Testing from the Maryland Department of the Environment last year also yielded PFAS detections in oysters.

And the issue extends beyond the region. While Maryland and Virginia have not issued consumption advisories for seafood, a number of states including New Jersey, Alabama, Michigan and Wisconsin have begun to take action.

Michigan in particular has drawn attention for its PFAS contamination. State officials there first detected “forever chemicals” at the now-defunct Wurtsmith Air Force Base in Oscoda, and the Michigan Department of Environment, Great Lakes and Energy, or EGLE, has ongoing investigations and remediation there, as well at a number of other military sites across the state. EGLE also tests fish across Michigan for PFAS and other chemicals and provides guidance for consuming fish with elevated PFOS levels.

Faber said Michigan is also the only state so far to set a groundwater cleanup standard for PFAS. But it remains to be seen whether DOD, which has known about the threat of contamination for decades, will meet those state cleanup requirements.

Under the Trump administration, EPA proposed a 40 ppt screening level for groundwater contaminated with PFOA and PFOS, and advised emergency action for levels exceeding 400 ppt. But an internal 2019 DOD memo suggested the 400 ppt number should instead be the screening level when PFOA or PFOS are found individually — a recommendation that drew significant criticism from advocates and lawmakers.

“DOD has sent mixed signals about whether or not they plan to meet standards set by states like Michigan,” said Faber. “If the state has a tougher drinking water standard, they’ll meet that standard. What they’ve not committed to do is to meet the state groundwater cleanup standard.”

When asked whether the Air Force must meet Michigan’s cleanup standards at the Wurtsmith base, EGLE spokesperson Hugh McDiarmid said the state agency expects the military to comply with Michigan’s standards and “the Air Force has indicated their cleanup will meet state standards.”

Pressure at the federal level

PFAS contamination is a top priority for the Biden administration. EPA in particular has elevated the issue, moving forward with drinking water standards for PFOA and PFOS and weighing hazardous substance designation under Superfund law for those two compounds.

But the federal government is under significant pressure from groups like EWG who argue agencies could be doing much more.

Betsy Southerland, a former career official in EPA’s Office of Water, said the agency currently works with state health departments that put out health-protective fish consumption advisories. While that doesn’t fix the contamination, she said it does alert the public to PFAS. EPA also provides guidance to states for adopting water quality criteria for human health protection that could lead to the proliferation of more state action, said Southerland.

Southerland noted that the 2020 National Defense Authorization Act required the U.S. Geological Survey to monitor the nation’s waterways for PFAS and said it is possible that exercise could lead to more information about fish contamination.

In April, EPA Administrator Michael Regan announced the launch of a Council on PFAS tasked with moving the issue forward and establishing a strategy (Greenwire, April 27). At the time, the council was given 100 days to submit recommendations to EPA, a deadline that came last week. The agency has said the deadline was met, but it is unclear what action EPA will take.

There is currently no national standard for testing fish, but EPA and the Navy are working to finalize a method this year. Faber noted that state and local governments have control when it comes to issuing fishing advisories. But EPA could still take action by listing compounds of PFAS as hazardous substances under Superfund law, he said, something that would accelerate cleanup of contaminated areas.

“Ultimately, DOD needs to take responsibility for its mess,” Faber said, adding that if Defense Secretary Lloyd Austin “isn’t willing to make PFAS remediation a priority, then President Biden or Congress needs to give him new marching orders.”

The findings come on the heels of the latest round of PFAS-centric bills in Congress, as lawmakers ramp up their efforts to crack down on the chemicals.

Contamination at military sites in particular has become a major source of contention on the Hill. Two new bills from Rep. Elissa Slotkin (D-Mich.) target DOD and seek to accelerate moving the Pentagon away from PFAS use.

The other, H.R. 4975 from Rep. Bill Posey (R-Fla.), would bar DOD from procuring, purchasing or selling certain PFAS-laden items.

A third bill, H.R. 4954, would direct the Department of Homeland Security to develop guidance for emergency response personnel like firefighters on best practices around limiting PFAS exposure. That legislation is co-sponsored by Reps. Debbie Dingell (D-Mich.) and Brian Fitzpatrick (R-Pa.), who have partnered together on PFAS bills before including the “PFAS Action Act,” H.R. 2467.

Criticism of DOD on its handling of PFAS contamination is only set to increase. A late July report from the Office of Inspector General found the military slow-walked actions to alert service members about health effects from AFFF exposure — a move that the watchdog said was in violation of the department’s own policies (Greenwire, July 27).