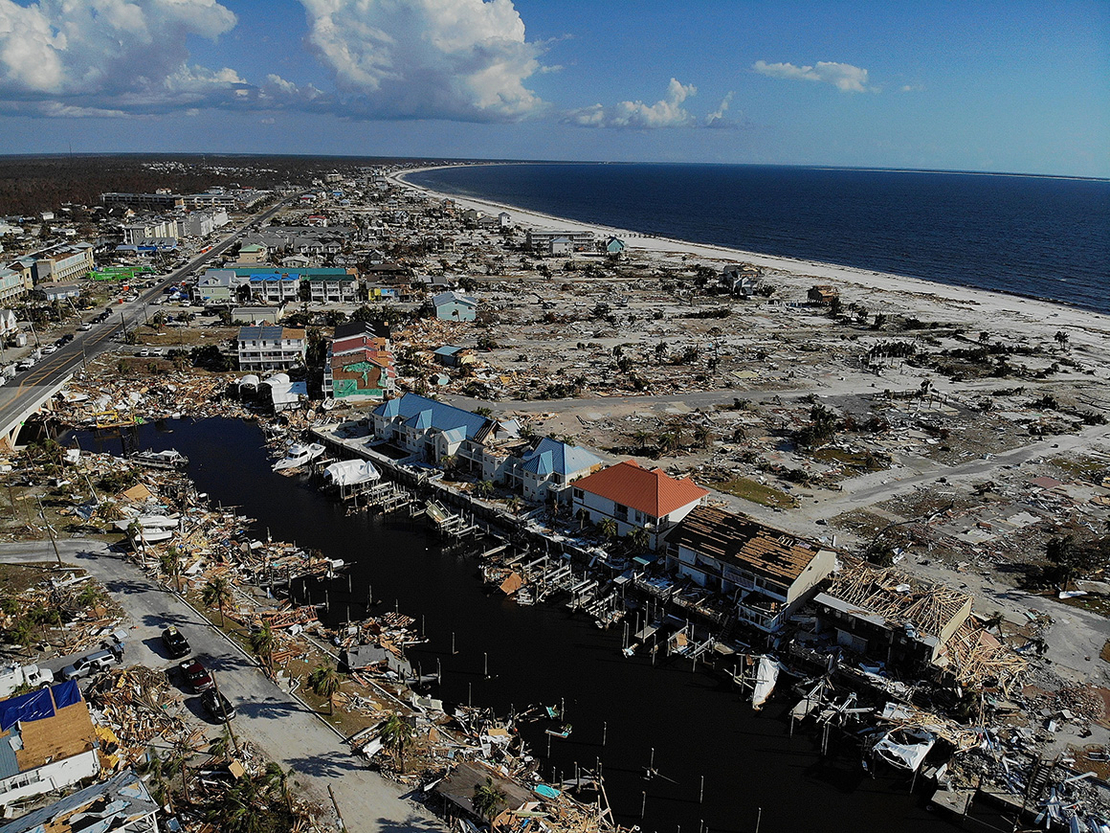 The aftermath of Hurricane Michael is seen in Mexico Beach, Fla., a week after the storm hit in October 2018. Joe Raedle/Getty Images

Long known as the nation’s most hurricane-prone state, Florida has achieved a new status that is aggravating hurricane anxieties and threatening real-estate values.

Florida has the worst property-insurance market.

Four Florida insurance companies have declared bankruptcy since April, and others are canceling or not renewing policies. Hundreds of thousands of people have been forced to buy property coverage through the state-created insurer of last resort, Citizens Property Insurance Corp.

“Every day, there’s another company that seems to be going insolvent,” Citizens CEO Barry Gilway said at a recent public meeting.

The number of Citizens policies recently passed 1 million for the first time since early 2014 and could reach nearly 2 million by the end of 2023, according to a Citizens projection.

Floridians now have the highest property-insurance rates in the nation, according to the industry-funded Insurance Information Institute. The average premium is $4,231 — nearly triple the U.S. average of $1,544.

“It’s reached a point where Floridians cannot find affordable coverage for their homes,” Institute spokesperson Mark Friedlander said. “It is going to eventually catch up with our booming real estate market and bring down values of property.”

At the same time, from October through June, nearly 160,000 Floridians dropped the flood insurance policies they bought from the Federal Emergency Management Agency as it raised rates on some homeowners. Flood insurance is separate from homeowners’ coverage.

The instability in the homeowners’ market is the result of a unique mix of circumstances including costly litigation against insurers and the exposure of Florida insurance companies to storm damage in nearby states.

Florida has not had a major hurricane since 2018. But since then, many Florida-based insurers expanded to cover properties in Louisiana, which has faced tens of billions in losses from Hurricane Laura in 2020 and Hurricane Ida in 2021. Insurers were hammered.

In late May, the Florida legislature met in a special session to address the insurance crisis and it enacted two laws aimed at strengthening industry finances in part by controlling costs arising from lawsuits filed by policyholders who challenge claims settlements.

But since then, three Florida insurers have gone bankrupt, affecting 170,000 policies, and others have announced they are withdrawing from Florida — a process that involves not renewing policies as they expire. A fourth insurer, Avatar Property & Casualty Insurance Co., went bankrupt in April.

“The crisis continues to escalate because strong enough actions have not been taken in the legislature,” Friedlander said.

Kyle Ulrich, president of the Florida Association of Insurance Agents, said the legislature enacted “meaningful and consequential tort reform” though it would take years for the changes to help the insurance industry.

In July, Citizens insurance added 63,000 new policies — the largest single-month increase since July 2006, when insurance companies were reeling from a series of hurricanes that devastated Florida in the two previous years.

But more significant than the number of Citizens policies is its financial exposure, measured by the total value of the property it insures.

While the number of Citizens-insured properties has doubled since September 2020, the value of the insured properties has nearly tripled to $360 billion from $133 billion, Citizens records show. The growth has been concentrated in hurricane-prone southeastern Florida, which has some of the state’s highest property values.

“One major hurricane event or a series of hurricane events like Louisiana had in the past few years could easily wipe out Citizens’ reserves to pay claims,” Friedlander said.

The growth is raising concerns that Citizens will use its little-understood authority to impose special assessments on every insurance policy in the state except for medical and malpractice coverage if it runs out of money to pay claims. Citizens can assess its own policyholders a charge equal to 45 percent of their premium.

“I don’t know how many of these million policyholders understand that. They could literally get a bill this year,” said Florida State University insurance expert Charles Nyce.

Citizens has imposed assessments only once since its creation in 2002. That occurred after five major hurricanes hit Florida in 2004 and 2005.

Gilway, the Citizens CEO, said at a July meeting that Citizens has $13.6 billion in reserves to pay insurance claims.

“Citizens is in a phenomenal financial position, and we’re prepared for whatever comes,” Gilway said.

“The bigger their policy base, the less that [reserve] covers,” Nyce said.

Nyce also fears that Citizens is not equipped to handle hundreds of thousands of claims that a major storm would generate.

“It would be hard for Citizens to properly service the 1 million policyholders they have,” Nyce said. “When they go from 400,000 policies to 1 million, do they have the resources? It’s a very difficult labor market.”

Although Florida lawmakers and Citizens officials want to rebuild the state’s insurance industry, they will have to overcome barriers such as Citizens’ favorable insurance premiums.

State law prohibits Citizens from increasing its average rates by more than 11 percent in a year.

Earlier this year, Citizens sought a 10.7 percent rate increase. But the Florida Office of Insurance Regulation approved an average increase of 7.4 percent.

At the same time, private-sector insurers have received rate increases of 30 percent to 50 percent.

The result is that Citizens has become the state’s largest property insurer by a wide margin, and many of its policyholders are paying rates far less costly than what they would pay an insurance company.

“Citizens is selling insurance at a loss. There’s no better way to say it,” Friedlander of the insurance institute said.

The discounted rates have compounded the difficulties for insurance companies, said Ulrich of the insurance agents group.

“There are companies that would like to write business, but you simply can’t do it when the Citizens premium is 30 to 40 percent less than what the voluntary market charges,” Ulrich said.

The state legislature is likely to consider increasing Citizens’ annual rate cap when lawmakers convene for their regulation session in March, Ulrich said, though he doubts they would take such action.

“Now, with over 1 million constituents insured in Citizens, there probably won’t be an appetite to do that because of how many constituents would be affected,” Ulrich said.

Even if private coverage became available, many Citizens policyholders would resist returning to the commercial market because Citizens claims payments are guaranteed, Ulrich said.

“There are going to be a large number of Citizens policyholders who are going to say, ‘I don’t want to leave, I don’t have to leave,'” Ulrich said.