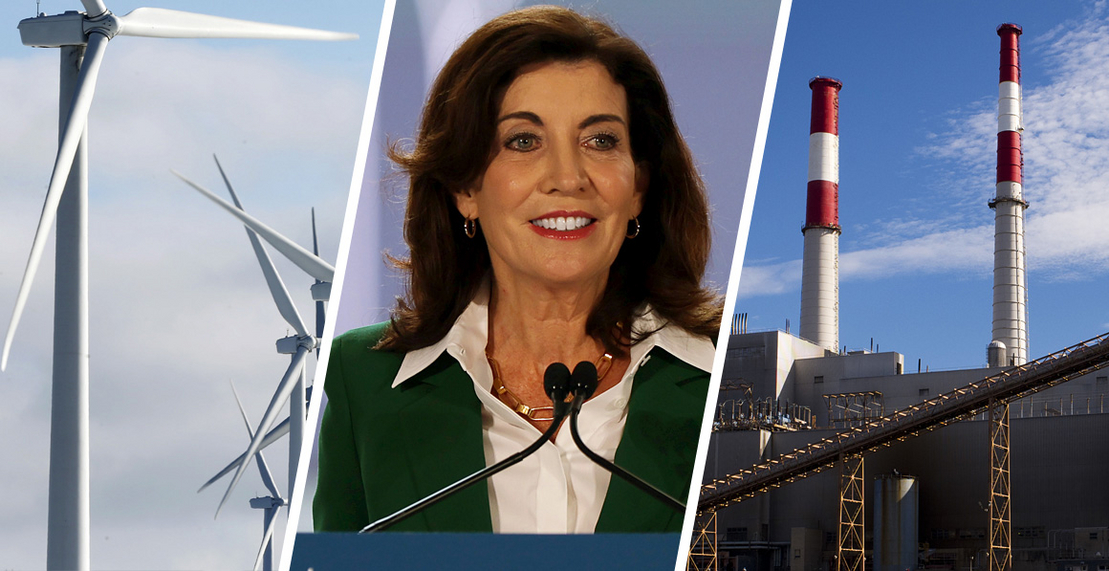 New York’s landmark clean energy and climate law is facing new questions as the state Legislature this month failed to pass measures that would help implement it even as renewables moved forward on several fronts.

The split tracks underscore the challenges — and opportunities — facing one of the largest states in the nation as it considers unprecedented policies that could shape the energy mix for years to come.

Under the 2019 Climate Leadership and Community Protection Act (CLCPA), New York must derive 70 percent of its electricity from renewable sources such as wind, solar and hydropower by 2030. A decade later, the entire grid must be carbon-free, and by 2050, the state should eliminate 85 percent of its carbon emissions directly in order to reach net-zero economywide emissions. The law’s environmental justice carve-outs also were considered a landmark, serving as the basis for President Joe Biden’s own Justice40 pledges.

This month, the New York State Energy Research and Development Authority heralded major progress toward the 70 percent renewable goal, which undergirds the other climate targets. After approving contracts for nearly two dozen new wind and solar projects, the state had enough renewable capacity in the pipeline to serve 66 percent of all power demand, the authority said.

Kathy Hochul, New York’s Democratic governor, called it proof that the state would “not just meet but exceed” the 70 percent requirement by 2030 (Energywire, June 3).

But many observers are concerned that New York is not on track to meet its climate goals, signaling the challenge of moving away from fossil fuels even in blue states with Democratic legislatures. While a far-ranging official planning process is well under way in New York, the Legislature has had trouble reaching consensus regarding the future of power plants and buildings, for example. The outcome in New York could have implications for the region, as well as set a precedent, considering that some policies, like a potential moratorium on energy-heavy cryptocurrency mining, haven’t been tried at scale.

Among the many unanswered questions are how the state will pay for its transition, particularly if Congress does not pass a major climate package; what the future of natural gas infrastructure should be and whether alternative fuels should help preserve it; and how to define a “disadvantaged” community for the purposes of environmental justice spending.

The Climate Action Council — a group of state officials, scientists, industry representatives, environmentalists and others charged with figuring out how to implement the CLCPA — needs to finalize a major blueprint on achieving the targets, as required by law.

Raya Salter, an environmental lawyer and member of the council, said the panel is wrangling with the fossil fuel industry’s desire to repurpose infrastructure for fuels like renewable natural gas and hydrogen, which she and other environmentalists oppose.

“We are still figuring out how we are going to pay for this,” Salter added in reference to the broader climate goals. “I think a lot of folks’ hopes were pinned on federal action.” The law did not provide funding, and “in the past, campaigns to impose a carbon price or an alternative tax on emissions have fizzled in the Legislature,” she said.

Also playing into the debate is the state’s last legislative session, which ended this month. This year, lawmakers wrestled with proposals that would have established first-in-the-nation policies, including a statewide gas ban and a two-year moratorium on new cryptocurrency mining at fossil fuel power plants. Many of the ideas could shape New York’s path well past 2030 if ever enacted, although the statewide gas ban didn’t make it through this legislative session.

The large volumes of wind and solar in New York’s project pipeline, as championed by Hochul, suggest that the state is making “a great deal of progress” in cleaning up its grid, said Gerrard.

But many environmentalists and allied labor and community groups, have countered official claims of progress. “Right now, we’re not on track to meet state law,” said Aaron Eisenberg, spokesperson for the Public Power NY Coalition, a left-leaning climate advocacy group.

New York’s leaders have claimed to be national leaders on climate for years, yet only a fraction of the state’s grid — somewhere around 5 percent, according to recent comments from energy officials — runs on wind and solar today, point out those groups.

That wind-solar percentage will almost certainly need to multiply several times over, since hydropower isn’t expected to grow too far beyond the 23 percent it contributed to the grid in 2020, according to state estimates.

In the state Senate, Democratic allies of many environmental groups passed a bill this month that would allow the New York Power Authority, a public utility, to take a far greater hand in renewable development. NYPA has been limited to building a handful of wind and solar projects.

Dubbed the “Build Public Renewables Act,” the bill would have tasked the state with reviewing progress toward the 70 percent renewable goal. NYPA would then build out whatever amount of wind and solar was missing, while also having energy bills for lower-income customers and phasing out its fossil fuel plants by 2030.

“It’s an insurance policy,” said Eisenberg, who backed the bill.

However, the bill was opposed by renewable developers, including a coalition known as the Alliance for Clean Energy New York, which has several big green organizations on its board. Anne Reynolds, ACE-NY’s executive director, said it would put private developers on an “uneven playing field” with NYPA.

The measure failed in the state Assembly, but it may not be fully dead. The Democratic-led Assembly’s speaker, Carl Heastie, has pledged to hold a late-July hearing on the plan, saying the majority of Democrats “agree with the goals” of the bill.

In an interview, Reynolds said she is confident that the 70 percent renewable level could be eclipsed by 2030 under current state processes, though she acknowledged “growing pains” on the state’s energy system. Once a project is completed, interconnecting to the grid can take years, and bottlenecks could grow with the expansion of new renewables, she said.

The Independent Power Producers of New York, whose members include gas and nuclear operators, has criticized the bill, saying in a joint statement earlier this year that it was “unnecessary.”

“The State’s current plan and efforts have been and are successful, and there is no reason to have NYPA undertake the same types of projects,” reads the statement, which was also signed by ACE-NY, the Solar Energy Industries Association and the New York Battery and Energy Storage Technology Consortium.

A 2020 law gave the state powers to override local authority in such cases — a move that was supposed to help fast-track permitting for renewable developers and guarantee a smoother path to climate goals (Energywire, April 3, 2020).

A first-in-the-nation pause on crypto?

Another factor with the state’s future energy mix is a bill that did pass the Legislature and seeks to address worries that cryptocurrency could lead to a renaissance of fossil fuel power generation in New York.

In the past, New York has hosted roughly 20 percent of the United States’ total crypto mining, according to crypto advocates, so a pause could have a significant influence on emissions from the technology.

The bill would slap a two-year moratorium on new air permits for gas plants that provide dedicated electricity to cryptocurrency miners. During that period, state officials would be required to weigh the environmental and social costs and benefits of energy-intensive cryptomining.

Democratic backers and environmentalists say it is meant to forestall the emergence of a new revenue stream for gas-fired power plants. Proof-of-work mining, in which computers solve puzzles to generate crypto’s value, often requires a large quantities of round-the-clock electricity. At least two gas plants are currently planning to host cryptomining operations in the state at present.

If enacted, the bill would be the first statewide moratorium in the nation.

“If signed into law, this legislation will have a significant chilling effect on crypto mining in the state, and threatens to send hundreds of good paying jobs to neighboring states,” said Kristin Smith, executive director of the Blockchain Association, in a statement.

“In a state that already presents challenges to doing business, enacting this prohibition on new mining operations in New York sends a clear signal that the crypto industry is unwelcome in the state,” she added.

Hochul has remained noncommittal, in public comments, on whether she would sign it, however.

Spokespeople for Hochul said earlier this month that the governor would review the legislation and pointed to comments in which she described “a balancing act” between environmental protection and job preservation in gas-plant communities.

Hochul will have 10 days to sign or veto the bill once it is on her desk, yet she has signaled that she could wait several months to act. By custom, New York’s Legislature only sends legislation to the governor’s desk once the governor requests it.

The debates in New York illustrate growing anxiety about crypto mining’s climate impacts. Earlier this year, Sen. Elizabeth Warren of Massachusetts and seven other Democratic members of Congress sent a letter to six bitcoin miners demanding answers about their electricity consumption and impacts on emissions, energy bills and the grid’s reliability (Energywire, Jan. 28).

The signatories took note of a temporary moratorium enacted in 2018 in one hydropower-rich New York town, after a mass influx of cryptominers caused wintertime energy bills to spike.

Backers of a state moratorium often depict the bill as narrow in scope, however, pointing out that crypto miners that draw their electricity from the grid would not be subject to it.

“This isn’t an anti-crypto bill, despite how opponents are presenting it,” said Liz Moran, a New York policy advocate at Earthjustice.

New York’s buildings sector was also a chief focus of lawmakers in the recent session that concluded June 4.

Two bills were enacted and await likely approval from the governor. One bill calls for greater consideration of clean energy and climate goals within state building codes, which would also ramp up standards for appliance efficiency. The other gives utilities the right to pursue pilots of large-scale thermal energy networks in their service territories — something that might lead to a low-carbon alternative to electricity as a source of heat.

The “All-Electric Building Act,” which would have banned gas heat for new homes and commercial buildings under seven stories, had been attacked by industry groups like New Yorkers for Affordable Energy — a group funded by gas utilities and labor unions that ran television ads characterizing it as unaffordable for consumers.

It did not come to a vote in either chamber, despite previous backing from the governor and the state Senate’s majority leader.

Had it passed, the bill would have been the first broad-ranging gas ban to become law in a U.S. state. Narrower restrictions have appeared on the West Coast, such as in Washington, where future building codes will mandate electrified space and water heat in some cases (Energywire, May 3).

Environmentalists blamed the speaker of the state Assembly, Carl Heastie, who had earlier refused to include the ban in the state’s budget, effectively blocking it. Both chambers are controlled by Democrats.

“New Yorkers fighting to move the state off fossil fuels are now left with only one choice: Working to boot fossil fuel-friendly legislators out of office,” said Alex Beauchamp, Northeast Region director at Food & Water Action, in a June 4 statement.

Michelle Hook, executive director of New Yorkers for Affordable Energy, predicted in one March statement that eliminating natural gas would “send energy bills through the roof.”

“Instead of listening to the loudest voices who represent a small minority, Albany lawmakers need to start paying attention to the majority of New Yorkers who want to keep their lights on and heat working through our cold winters,” she added.

Spokespeople from Heastie’s office did not respond to E&E News’ inquiries.