Half the U.S. would qualify for flood program aimed at poor 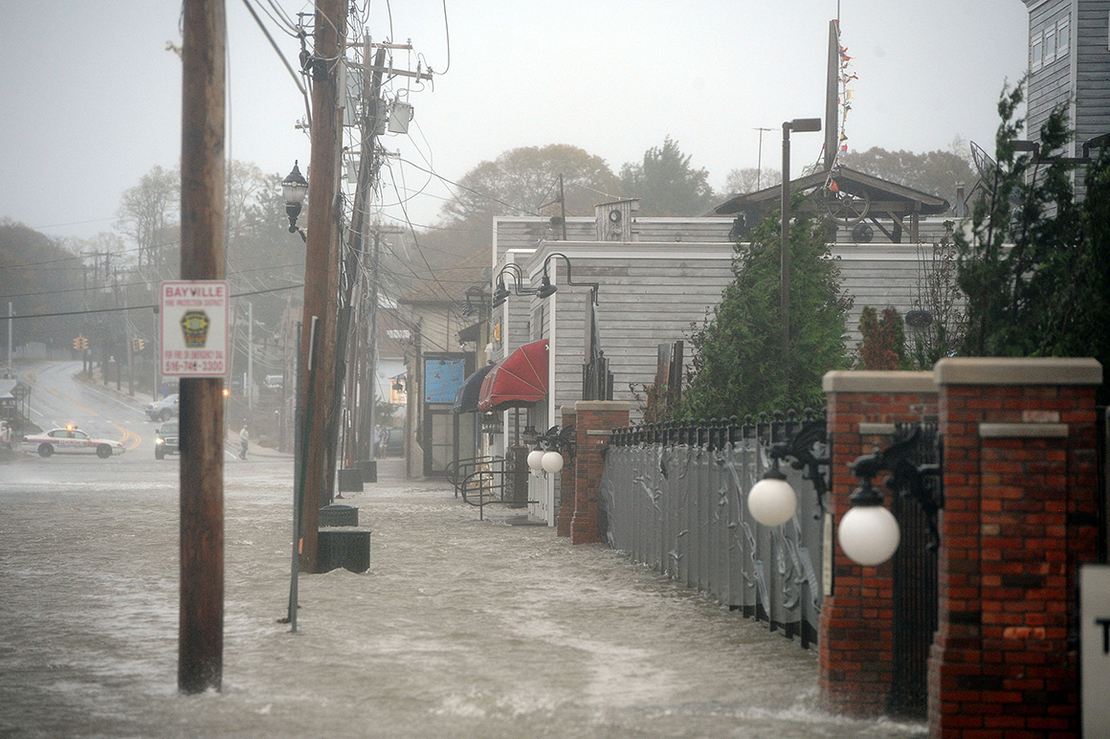 Water floods Bayville Avenue up to the stores, from the effects of Superstorm Sandy in October 2012 in Bayville, N.Y. AP Photo/Kathy Kmonicek

Households with income as high as $150,000 a year could get priority for federal flood-mitigation aid under the infrastructure law that President Biden signed Monday.

The law contains unprecedented funding for flood-mitigation projects, but it makes only a halfhearted effort to steer the money to disadvantaged communities that the Biden administration has prioritized for climate protection.

The Federal Emergency Management Agency will get $3.5 billion to distribute to states and localities over the next five years for projects that build protection against flood damage. That’s roughly triple the amount of money Congress has historically given FEMA to spend each year on flood-mitigation grants.

But the financial incentives apply so broadly that they could benefit households whose annual income is $150,000.

“It helps, but not that much,” said Carlos Martín, a scholar at the Brookings Institution and expert on disaster assistance.

The $3.5 billion is a small piece of the $500 billion in new spending contained in the infrastructure bill. The flood funding has gained attention because Congress tied the spending to household income and social vulnerability, which broadly measures a community’s ability to withstand a disaster.

The incentives might not be much help to disadvantaged communities trying to win FEMA mitigation grants because the application process remains costly and time-consuming, Schoeman said.

In order to receive the 90 percent funding level, a community must spend the money on homes that meet one of two criteria.

The home must be located in a census tract that ranks in the top 50 percent of social vulnerability according to a federal index that ranks each census tract on economic, demographic and social characteristics.

Or the home must be owned and occupied by a household whose income is not higher than the median income in the surrounding area.

Both criteria mean that roughly half the country qualifies for the financial incentives.

Households qualify for the incentive if their income is “not more than 100 percent of the applicable area median income,” under the law.

Several federal agencies calculate an “area median income,” and it is not clear which agency calculations will be used.

In flood-prone communities along the coast in western Connecticut, homes owned by households with incomes up to $151,800 would qualify for the financial incentive under Department of Housing and Urban Development data showing area median income levels.

On Long Island, N.Y., the income-eligibility limit for the incentive is $129,909, according to HUD.

Anna Weber of the Natural Resources Defense Council said the financial incentives are significant because they mark the first time Congress has given priority for flood-mitigation grants based on income levels or social vulnerability. The money is paid through FEMA’s Flood Mitigation Assistance (FMA) program, which is a nationally competitive grant program that Congress funds each year.

“This is a really big step for the FMA program,” Weber said. “It represents such a huge change in how the program is defining its priorities.”

Weber said she would be “closely watching how these grants are distributed and how these changes affect where the money goes.”

Press officials from the House Financial Services Committee and the Senate Banking Committee did not respond this week to emailed questions.

In July, Biden selected the flood mitigation program as one of 21 federal environmental and economic programs that must enhance benefits for “disadvantaged communities” as part of his Justice40 Initiative. The initiative is a cornerstone of Biden’s vow to direct 40 percent of federal benefits in climate and clean energy to disadvantaged communities.

The administration so far has left it to agencies to define “disadvantaged community” using a broad set of measurements of factors such as income and poverty levels, racial segregation, housing costs and impacts from climate change.

In August, FEMA used a much stricter definition of “social vulnerability” when it announced its own steps to steer flood-mitigation grants to disadvantaged communities.

FEMA said that when it rates grant applications next year, it would give bonus points to projects located in census tracts that are in the top 25 percent of a federal social-vulnerability index.