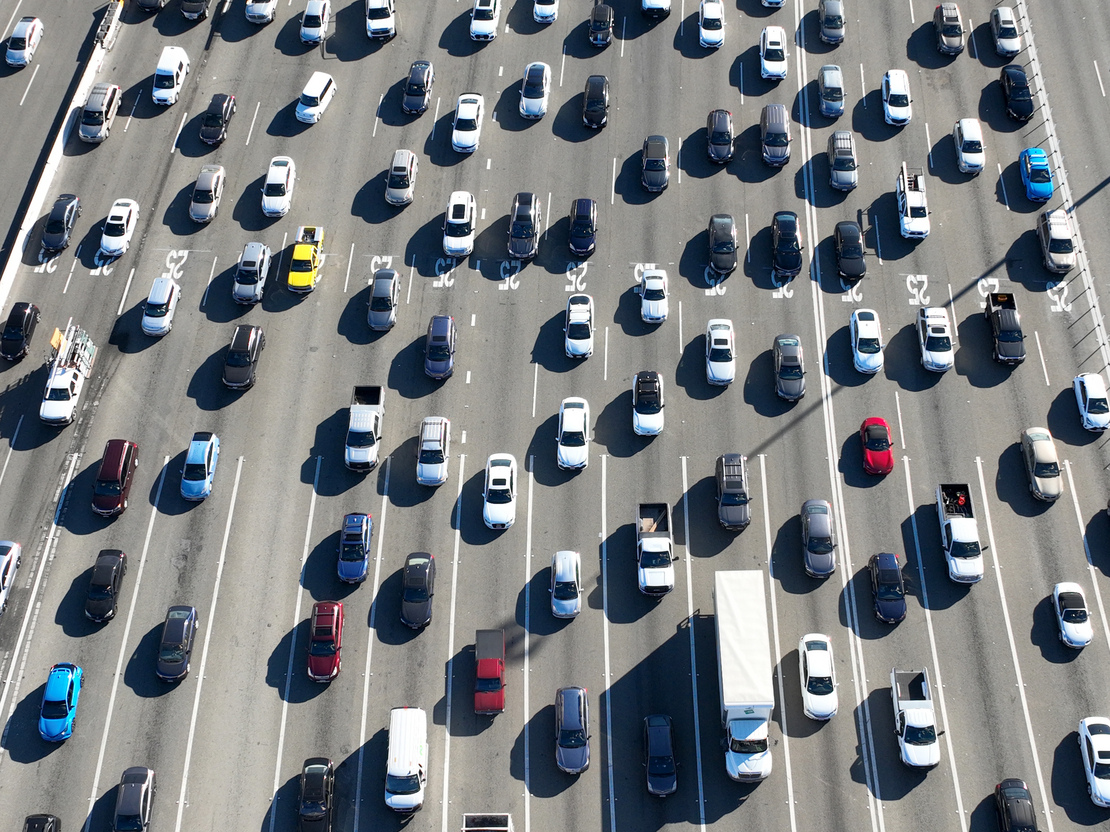 Traffic backs up at the San Francisco-Oakland Bay Bridge toll plaza in February. The Biden administration is preparing rules that would require states to establish greenhouse gas standards for cars. Justin Sullivan/Getty Images

A proposal by the Biden administration to require all states to track and reduce on-road vehicle greenhouse gas emissions is facing scrutiny — and likely legal challenges — from opponents.

The draft rule from the Federal Highway Administration would task metropolitan planning organizations and the 26 states that do not have transportation emissions reduction targets with implementing those goals using $27 billion from the bipartisan infrastructure law.

Its potential to slash the sector’s carbon output has drawn praise from Democrats and environmentalists. Transportation accounts for more than one-quarter of U.S. greenhouse gas emissions — more than any other sector.

But the proposed rulemaking has come under attack from Republican lawmakers and other stakeholders wary of government overreach. The FHWA received tens of thousands of public comments on the proposed rule by Thursday’s submission deadline, among them a letter from a group of Republican senators urging the agency to rescind the proposal for being “overly burdensome” and “potentially unlawful.”

The letter calls out the rule as an attempt to co-opt federal infrastructure funding “to meet the Administration’s climate agenda” and for “running afoul of congressional intent.” The Biden administration and environmental policy scholars have disputed those claims, but they could be a harbinger of litigation from state attorneys general seeking to block new climate regulations.

“This is definitely a new thing, so there’s going to be a legal fight over it, no doubt about that,” said Ethan Elkind, director of the climate program at UC Berkeley’s Center for Law, Energy and the Environment.

Under the proposed regulation, state and local transportation planners would have the flexibility to decide their own targets for vehicle emissions reductions on national highways, as long as they lead to cuts of 50 percent over 2005 levels by 2030, and net-zero emissions by 2050. They would also join a nationwide framework for reporting and tracking those carbon reductions.

Senate Democrats said in their own letter that the proposed rule would establish a “valuable tool to inform and improve state and local transportation decision making, which are more important than ever as we seek to make decisions today … so that we can avoid the worst impacts of climate change in the years to come.”

Some state departments of transportation submitted comments in full support of the draft rule. Others said the requirements would create unnecessary burdens or that they are not currently equipped to tackle on-road emissions through declining targets.

The Senate Republicans and a subset of other commenters targeted the proposed rule’s very existence, not just its mandates. Their concerns echoed similar remarks over the summer from Sen. Shelley Moore Capito (R-W.Va.), who suggested in a statement that the Supreme Court’s ruling in West Virginia v. EPA in June “would indicate the climate goals being proposed are beyond FHWA’s authority.”

Many observers predicted that the decision would open the door to additional claims that federal agencies are overstepping their stated mission in order to fight climate change (Climatewire, July 7).

“I do think we are seeing persistent challenges to agency actions around climate change mitigation, and so I think it’s probably pretty predictable that we might see a challenge here,” said Emily Hammond, a vice provost and research professor at the George Washington University Law School.

But whether the FHWA’s draft rule meets the major questions standard “is iffy,” said Daniel Farber, a law professor at the Center for Law, Energy and the Environment at the University of California, Berkeley.

The FHWA has attributed its authority to implement the rule to a congressional statute that authorizes the Department of Transportation to set performance measures on highways. The statute does not define “performance,” but the FHWA is interpreting it to include highways’ environmental performance, the agency said in its notice of proposed rulemaking.

An FHWA spokesperson did not respond to questions about that justification.

The agency’s reasoning “seems to be an expansion of the idea of these highway performance standards well beyond what’s been done before,” Farber said. “So obviously, you’re going to have a question about whether the statute is broad enough to support those.”

The so-called Chevron doctrine from the 1984 case Chevron U.S.A., Inc. v. Natural Resources Defense Council, Inc. would require federal courts to give deference to an agency’s interpretation of vague congressional statutes. But “nobody’s quite sure where the Supreme Court stands on the Chevron doctrine right now, so that’s one issue,” Farber said.

As for applying the “major questions doctrine,” he said, someone challenging the proposed rule would probably struggle to prove that the regulation meets the criteria.

“It doesn’t seem as big a reach in some ways as what EPA was doing in West Virginia v. EPA with the Clean Power Plan,” Farber said. “One reason is that it’s a pretty gentle intervention. States have … years to try to figure out this target and there may be a variety of ways for them to do it. And [FHWA] is not trying to dictate how they get there or anything like that.”

Still, in its comments submitted Thursday, the American Road and Transportation Builders Association (ARTBA) called the FHWA’s reasoning “an opportunistic reading of the statute in support of its proposed rule.” Congress did not give the agency explicit authority to implement performance measures for greenhouse gases, and it did not include a greenhouse gas reporting mandate in the infrastructure law, the nonpartisan trade group said.

“The bipartisan infrastructure law was something that was the result of careful negotiation by both parties,” Nick Goldstein, ARTBA’s vice president of regulatory and legal issues, said in an interview. “It’s bad precedent when you read things into a law that weren’t there, that weren’t negotiated. … We should stick to what is actually in the law and what Congress has given the agency the authority to do.”

The American Association of State Highway and Transportation Officials wrote in its comments that while a number of state transportation departments want to see the proposed rule finalized, FHWA’s interpretation of the congressional statute “to justify its legal authority for establishment of this new rule can lead to consequences beyond the intent of Congress, setting a precedent for future interpretations leading to establishment of new and additional performance measures without Congressional authorization.”

“The exact language here talks about enhancing the performance of the transportation system while protecting and enhancing the natural environment,” Hammond said. “And so the agency here has a very strong basis. This is Congress directing it to consider environmental sustainability as it sets up these performance management frameworks.”

“I think there’s a strong case to be made that greenhouse gas emissions fit within that, especially since climate change and all the severe weather impacts place a huge strain on our transportation infrastructure,” added Elkind of UC Berkeley. “So there’s really a direct tie, not only to enhancing the natural environment by reducing emissions, but also by not contributing to a global problem that is really putting our transportation infrastructure at direct risk.”

The Obama administration first proposed including carbon dioxide measures in performance management plans in 2017, but the Trump administration stalled on the matter following public comments and eventually rejected it. The Biden administration appears to have prepared for possible legal action seeking to block the regulation, Hammond said.

“Now the agency, in proposing a new rule that indeed would bring climate change considerations back into play, has the benefit of that full record, which includes the public comments, it includes the legal analysis,” Hammond said.

“So yes, we are likely to see litigation,” Hammond added. “But do I think that the government or the agency is doing everything it can to ensure that it has the very best arguments possible? Absolutely.”