How Gov. Whitmer built a climate legacy in divided Michigan 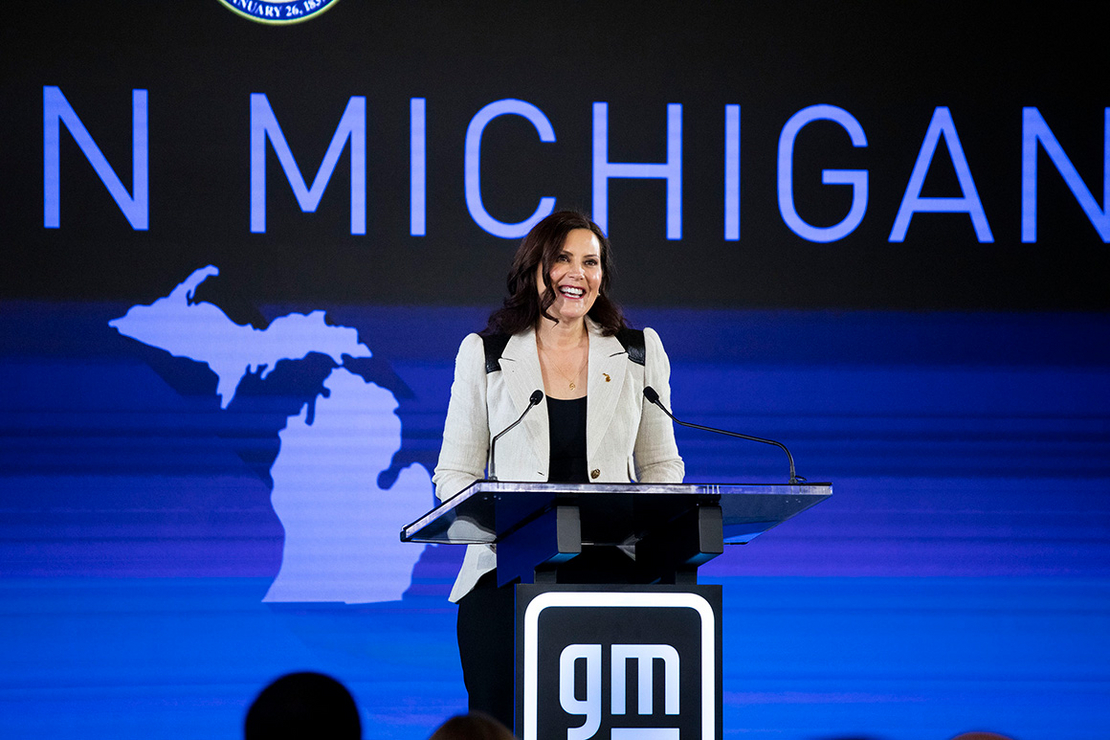 Michigan Gov. Gretchen Whitmer (D) speaking at a Jan. 25 event in which General Motors announced a $7 billion investment in electric vehicle and battery production in the state of Michigan. Bill Pugliano/Getty Images

Democratic Michigan Gov. Gretchen Whitmer is running for reelection against a Republican field that saw one frontrunner kicked off the ballot and another candidate arrested in connection with the Jan. 6 Capitol insurrection.

For a swing-state governor in a harsh political climate, it’s an enviable position. Polling this summer suggested Whitmer began the campaign with an advantage over her potential opponents, though the field won’t be set until the Aug. 2 primary.

Whitmer nevertheless has taken steps to future-proof her climate plans against the chance that Republicans regain the governor’s mansion. Part of that strategy involves cutting bipartisan deals, such as a $4.8 billion water funding package she crafted this year with the Republican Legislature.

But perhaps more important have been the Whitmer administration’s executive actions. In most states, those items would be among the most vulnerable. But in Michigan, the governor has broad power over the Public Service Commission. And over the past four years, Whitmer’s appointees have cemented plans to cut the state’s electricity emissions while laying the groundwork to block fossil fuel infrastructure.

Those actions have taken on new weight after the Supreme Court curtailed EPA’s power to cut climate pollution. With uncertainty surrounding future federal efforts and congressional action unlikely after the midterms, environmentalists are considering whether to prioritize gubernatorial races such as Whitmer’s over House races and other federal campaigns.

“Having leaders like Gretchen Whitmer elected to office in states matters more … than almost anything else,” said Lisa Wozniak, executive director of the Michigan League of Conservation Voters.

The implosion of Michigan’s Republican gubernatorial field has not led environmental activists to triage resources to other races. Instead, advocates say that running up the score on Whitmer’s reelection could help House Democrats and other down-ballot candidates ride her coattails.

Without a Senate race to compete for statewide attention, Wozniak said, “it is all about, in many ways, how Gretchen Whitmer performs in November.”

Earlier this year, five Republican gubernatorial candidates — half the GOP field — were kicked off the primary ballot after using paid signature-gatherers who were found to have submitted thousands of forged signatures. That included James Craig, the former Detroit police chief who had led primary polling. He is now running a write-in campaign.

Shortly after that, the FBI arrested one of the remaining Republicans on the ballot, Ryan Kelley, on misdemeanor charges related to the Jan. 6 insurrection. Kelley, a real estate agent, pleaded not guilty and has denied entering the Capitol. The front page of his campaign website asks for donations to his legal defense fund.

In their attempt to unseat Whitmer, Michigan Republicans are running against her pandemic lockdowns, along with rising prices and crime. But her environmental record has not been a top-tier issue — an omission that may be a feature, not a fluke, of her approach.

Whitmer’s insider-heavy climate strategy has created an unusual political dynamic, observers say. On the one hand, Michigan is taking significant actions to cut pollution — a path that some national Democrats consider risky at a time when most voters care more about gas prices.

On the other hand, the nature of those actions is so wonky that supporters and opponents alike occasionally have struggled to translate them into public messages.

For instance, the state’s public service commissioners — all of whom were appointed by Whitmer — finalized plans last month for one of the state’s largest utilities, Consumers Energy, to exit coal power by 2025 (Energywire, April 21).

That makes Consumers Energy one of the first utilities in the Midwest to set that benchmark. But the form it took — an integrated resource plan that arose from a settlement with the attorney general and others — was complicated. And because it’s an agreement with a private company, there’s not much a Republican governor could do to reverse it.

Likewise, the public service commission this month started re-examining whether the aging Line 5 pipeline beneath the Straits of Mackinac poses a safety threat.

Enbridge is trying to build a new containment tunnel for the pipeline. But in 2020, Whitmer ordered Line 5 shut down after a state review found what she called an “unacceptable risk of a catastrophic oil spill.” The pipeline continues to operate amid litigation.

Shuttering that pipeline is a major priority for environmentalists. Enbridge has argued that closing it would increase fuel prices in Michigan and Wisconsin by a half-cent per gallon.

The commissioners did not detail a timeline for their latest inquiry, but it’s the latest step in a long-running drama; the process has dragged on since before Whitmer took office. The pipeline also is the subject of lawsuits and federal permitting fights.

“The optics are really complicated, because here we are four years later … [and] there’s not a neat conclusion,” said Liz Kirkwood, executive director of the water advocacy group FLOW.

Tudor Dixon, a conservative media personality whose gubernatorial campaign is backed by former Education Secretary Betsy DeVos, appeared on Fox News earlier this year to attack Whitmer and President Biden for bowing to “extremists and their make-believe environmental issue.”

“A lot of people aren’t talking about what this means for the Upper Peninsula of Michigan,” Dixon said. “One in 5 homes is heated by propane. … That propane, 100 percent of it comes from Line 5.”

(Line 5 supplies about 65 percent of the Upper Peninsula’s propane, according to Enbridge.)

Continued Dixon: “This ‘just in time’ energy has got to be there for our people who live in an area that is below freezing for months out of the year. … This could put people in a situation that endangers their lives.”

But Dixon — who polling now suggests is the GOP front-runner — might find it hard to reverse Whitmer’s actions. Two of the three public service commissioners have terms that run into mid-2025 or beyond.

Whitmer has excelled at using those types of insider maneuvers to lock in her policies, Kirkwood of FLOW said.

“Although you might not get the big ‘headline wins,’ you could also argue that it’s a very smart way to build the policy in the institutions that actually have the longevity to carry out the work,” she said.

On the campaign trail, few expect climate to emerge as a defining issue itself. But energy and the environment are fundamental to the issues that voters care about.

“I’d say two words for identifying Michigan’s culture: one is ‘water’ and the other is ‘cars,’” said Lana Pollack, a former Michigan state senator and Obama administration official.

Michigan is the only state that’s entirely within the Great Lakes basin, and water issues have offered rare opportunities for bipartisanship. The state is also especially vulnerable to climate-fueled flooding, such as the 500-year flood in 2020 that breached two dams and devastated the city of Midland.

For many Michiganders, water also remains a health issue.

Nearly a decade after lead was found in the drinking water of Flint, many people across the state still lack access to safe water — especially in areas that are predominantly Black, low-income or both. The city of Benton Harbor (85 percent Black) continues to grapple with the issue, with the state saying last week that its lead levels were “just below the federal action level.”

On manufacturing, Whitmer has touted Michigan as one of the most environmentally friendly places to site any factory — not just automakers — as companies increasingly prioritize lowering their emissions and using less water.

Whitmer, emphasizing bipartisanship, says she wants to position Michigan companies to be “leaders of electrification.”

“Putting the world on wheels was Act One. In the decades to come, we’ll electrify the world,” she said earlier this year when announcing a $7 billion investment by General Motors Co. in electric vehicle manufacturing.

“We’ll invest in every community, fight for every job and continue putting Michigan first,” Whitmer said, thanking auto executives, labor leaders and lawmakers from both parties. “Our collaboration over the last few months proves that when we work together, we win. I’m confident that we can and will continue winning huge projects and making big investments in Michigan.”

Whitmer already has outlined a blueprint for her second term if she wins reelection: the Michigan Healthy Climate Plan. It calls for cutting climate pollution 28 percent by 2025, then 52 percent by 2030, on the way to net-negative emissions after midcentury.

She also aims to cut emissions from heating buildings by 17 percent by 2030, while limiting what low-income homes have to pay for power and heating to no more than 6 percent of their annual income.

The components of the plan include a state-level version of the federal Justice40 initiative, which seeks to direct 40 percent of climate-related spending toward disadvantaged communities.

Whitmer’s efforts follow in the footsteps of another well-known Michigan governor, Jennifer Granholm.

Granholm was the state’s last Democratic governor, and she now serves as Energy secretary under President Joe Biden. Climate is a major part of her portfolio.

As governor from 2003 to 2011, Granholm faced a cascade of fiscal and economic crises as the Great Recession slammed the state hard. But she also helped broker the auto industry bailout that tightened tailpipe pollution standards. That was one of the biggest climate actions of the Obama era.

Whitmer’s pandemic-era administration has faced its own external pressures. But observers say Michigan’s financial recovery has positioned Whitmer to plan and execute much more climate policy than was possible during Granholm’s tenure.

“They’re both carved out of a progressive-pragmatic [mold] — one word without the other wouldn’t do it,” said Pollack, who added that the challenges facing Granholm and Whitmer were as different as “night and day.”

Whitmer has “both the necessity and the opportunity to address climate change in a way that was not available a decade earlier with Granholm,” she said. “And I’d say that she’s moved into that space well.”