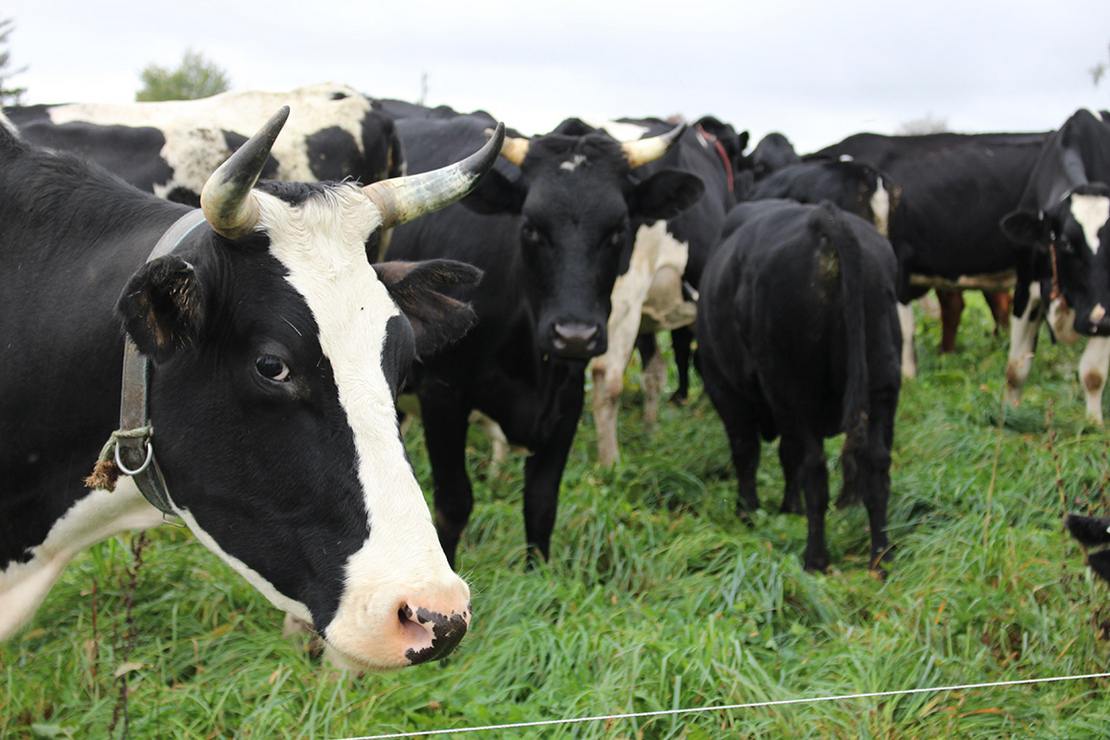 Cows — with the horns on — graze on Nelson Martin's farm in Myerstown, Pa. With the cows on pasture, not confined in barns, Martin says he doesn't worry as much about cows poking each other, or him. Marc Heller/E&E News

MYERSTOWN, Pa. — October wound down on Nelson Martin’s dairy farm in true autumn fashion, with windswept rain and the thermostat stuck in the 40s as the season’s first nor’easter churned.

But a prettier picture awaits next spring: cows chomping the grass under rows of blooming apple trees.

Farmers like Martin are turning away from the idea that cows must graze in open fields. He’s embracing an old practice that puts livestock and trees in the same space — and he may help reduce pollution in the Chesapeake Bay and sequester carbon while he’s at it. With the help of the Chesapeake Bay Foundation and an Agriculture Department research grant, Martin’s planted dozens of apple trees and plans to venture into Chinese chestnut trees, too, transforming 20 or more acres into dual-purpose groves.

Using grant money from USDA’s National Institute of Food and Agriculture, the foundation is working with five farms in south-central Pennsylvania to put trees on pastures, a practice called silvopasture. With about $80,000 in grant money, the nonprofit organization is taking three years to put in trees and begin to measure results — although the benefits would increase in later years, organizers said.

Martin, 44, admitted he’s having a hard time convincing his neighbors or his father, from whom he’s buying the family farm, to sign onto the concept. Down the road, a neighbor is expanding to 300 cows in the conventional way, by bringing them indoors to eat formulated grain rations, he said.

"This looks pretty weird," said Martin, who keeps just 30 milking cows at a time and has a license to produce, bottle and sell unpasteurized milk. But he’s sticking to the plan. "As we talk about this farm, we always seem to come back to more trees."

The Cheseapeake Bay Foundation has overseen the planting of 1,500 trees at the five farms, in plots of 120 each. Organizers figure fields with a mix of grass and trees will send less runoff into the Chesapeake watershed and boast healthier grass and trees fed by the manure the cows drop.

"It’s considered an ancient practice," said the project leader, Molly Cheatum, citing a long history in other countries. But with the advent of industrialized agriculture came monocropping — putting the same crops on the same fields year after year.

Despite its tradition — farmers in Spain have long let hogs eat acorns under oak trees, for instance — silvopasture hasn’t caught on in the U.S. or been widely studied here. Federal agriculture officials in Pennsylvania were skeptical, Cheatum said, when she and Austin Unruh, a conservation consultant, first raised the idea and looked for funding.

It’s part of a broader set of practices called agroforestry that combine food production with trees. Advocates say it could help in the fight against climate change by encouraging both the planting of trees and less-intensive livestock farming.

"Research suggests silvopasture far outpaces any grassland technique for counteracting the methane emissions of livestock and sequestering carbon under-hoof," said Project Drawdown, a San Francisco group inspired by the 2017 best-selling book "Drawdown" by Paul Hawken, on its website. "Pastures strewn or crisscrossed with trees sequester five to ten times as much carbon as those of the same size that are treeless, storing it in both biomass and soil."

From raw milk to fruit trees

Martin was already something of an agricultural pioneer by the time he started putting apple trees in his pastures in 2018. Several years earlier, he joined the movement to produce raw, unpasteurized milk, a trend slow to catch on but which the Pennsylvania Department of Agriculture has approved for about 200 farms. He also leaves his cows’ horns on — a rarity among dairy farmers who worry they’ll gore each other or a person.

The apple trees are well over his head now, protected by white plastic tubes and barbed wire around the trunks that keep cows from chewing. The grass, a variety of fescue, grows in 8- or 10-inch clumps with the occasional squash plant interspersed; the cows eat squash readily, he said, proving the point by sticking a small pumpkin in front of a Holstein that quickly took the bait.

Martin admitted he’s not like most dairy farmers. He doesn’t sell his milk to a dairy company like Nestlé SA or Kraft Foods Group. He doesn’t use much in the way of farm chemicals, and he doesn’t confine his cows to a barn the way most farmers do. "The cows need to be out grazing," he said.

He also has far fewer cattle than than the average dairy farm, which in Pennsylvania numbers about 89 cows, according to the Pennsylvania Center for Dairy Excellence, based in Harrisburg. He can’t make a living on milk alone, Martin said, which explains the appeal of also growing apples and nuts. Martin has even planted dogwoods near the stream — the red twigs make nice home decorations.

"They go well with pumpkins," said Unruh, whose consulting business, Crow and Berry Land Management, selects the trees as part of the project.

Forest Service researchers are studying silvopasturing, too. The agency has a national agroforestry center, created after the 1990 farm bill, devoted to researching and promoting combinations of forestry and food production. They’re focused mainly on private lands, although some national forests have considered the idea, researchers told E&E News, and there’s interest in expanding the concept to the the evergreen forests of the West and Southeast.

The Agriculture Department has encouraged agroforestry in the past. During his first stint as Agriculture secretary, Tom Vilsack in 2013 approved a department regulation related to the practice.

Researchers at the Forest Service just finished an analysis of silvopasture practices, said Matt Smith, the center’s research program leader. Most producers graze cattle, the analysis showed, although some have ventured into goats or ducks. Pigs are risky because of the damage they can inflict on trees, Smith said. "You just have to keep an eye on them."

The vast majority of producers also use rotational grazing, a favorite practice for sustainable agriculture groups since it takes better care of soil and allows grass to grow back.

Researchers will soon have a new trove of helpful information, Smith said. The center is working with the National Agricultural Statistics Service on survey of producers. To be completed in January, it will shed light on who’s using agroforestry, how and where, broken down by state.

Back on his Pennsylvania farm, Martin stood against the wind and the drizzle and contemplated his novel approach to the dairy business, compared to his friend, who’s about to make the jump from 80 milkers to 300.