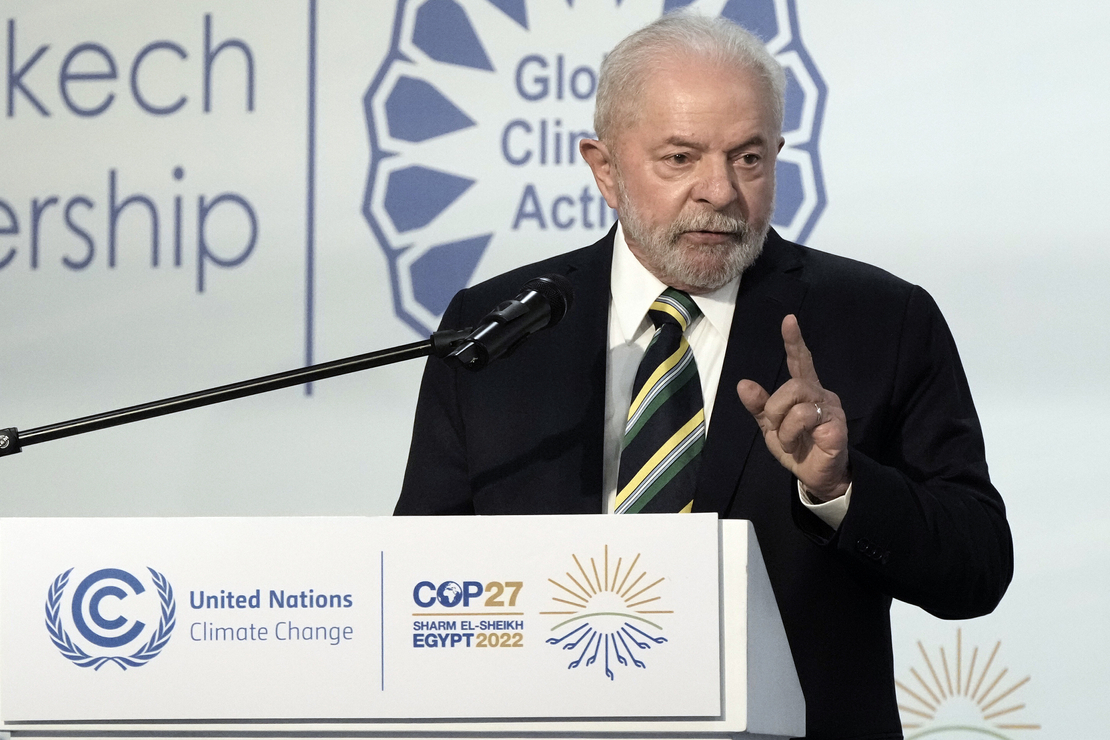 In a 30-minute speech, he promoted respect for nature, rights for Indigenous people and a complete halt to deforestation across Brazil.

“Today I am here to say that Brazil is ready to join once again the efforts to build a healthier planet,” he said.

Lula then called for more leadership to reverse higher temperatures and more resources from developed countries so the poorest and most climate-threatened can face the consequences of a problem they didn’t create. And he called out gross inequity in how climate impacts are felt across nations based on the size of their economies.

“The struggle against global warming is inseparable from the fight against poverty,” he said to widespread applause.

As negotiators here work to strike an agreement on the future of climate action and funding, a crowd too big to fit in one room gathered hoping to get a glimpse of a man expected to turn the tide not just for the Amazon but for all of Brazil’s biomes.

Some also hoped Lula could set an example for the type of leadership needed to tackle a growing climate crisis.

“We feel that was not only Lula’s victory or democracy’s victory, but its Indigenous peoples’ victory in the sense of we defend multispecies democracy, we defend a broader term or idea of democracy of the environment. We cannot think about a healthy economy without a healthy environment,” said Edson Krenak Naknanuk, Brazil lead at Cultural Survival, a nonprofit that defends the rights of Indigenous peoples.

The appearance of the 77-year-old politician at annual climate talks here marks Lula’s first international trip since he won a tight election runoff late last month. The invitation to an incoming president was an acknowledgment that the world is in a rush to see Brazil participating once again in discussions about the future of the planet, he said.

“At the end of a relentless dispute, the Brazilian people made their choice, and democracy won,” he said. “With that … the respect for human rights is back and the commitment to face with determination the climate change issue.”

Lula isn’t yet helming the government, but that didn’t stop him from negotiating future climate deals in Egypt.

German Minister for Economic Cooperation and Development Svenja Schulze said following a meeting with Lula’s team she would be setting up calls immediately after the conference to discuss a Group of Seven deal to pay Brazil for the transition of its economy.

“We should talk with Brazil’s new government not only about the energy sector but, going beyond that, about a partnership that looks in the round at how to move the economy in a more social and ecological direction,” she said.

Climate change will be a key priority in the new government, said Lula, calling the massive forest clearing that occurred under his predecessor, Jair Bolsonaro, “something of the past.” In just the past three years, Amazon deforestation increased 73 percent under pressure from mining, logging and ranching interests. Many experts feared another term for Bolsonaro could have pushed it into collapse (Climatewire, Sept. 30).

Lula also vowed to crack down on environmental crimes and strengthen oversight bodies that Bolsonaro dismantled. And he pledged to create a ministry of Indigenous people that would push for policies aimed at peace, security and sustainability.

The 28 million Brazilians that live in the Amazon have to be the first agents and beneficiaries of a sustainable local development model, not a model that destroys the forest and provides wealth to a very few, Lula said.

“Let’s prove once again that it is possible to generate wealth without provoking climate change,” he added.

In a nod to the global arena he was addressing, Lula made a bid to host climate talks in 2025 and called for an overhaul of the U.N. system to allow for a greater diversity of voices and representation.

And he even weighed in on one of the most contentious issues at this year’s climate talks: compensation for irreparable climate damages. “We cannot postpone this debate,” he said.