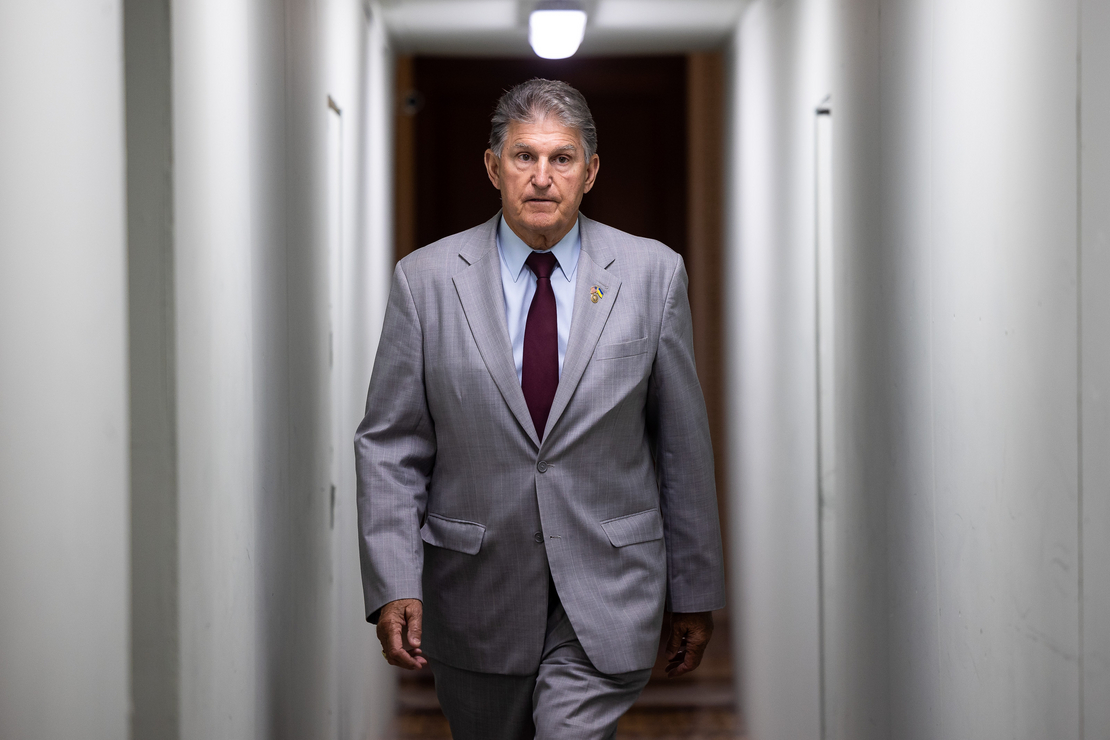 West Virginia Democratic Sen. Joe Manchin criticized the idea of a national shift away from gas cars toward electric vehicles in lacerating terms yesterday, raising doubts about the fate of pro-EV policies being discussed in reconciliation bill talks.

“In terms of reconciliation, I met with Senator Manchin again this morning,” Schumer told a gaggle of reporters yesterday afternoon. “We’re continuing to have very good and productive discussions, but there are still some issues that have to be resolved.”

At least one of those issues appears related to a host of tax credits to spur the domestic manufacturing and deployment of electric vehicles.

Manchin urged U.S. Trade Representative Katherine Tai to crack down on China for what he characterized as its flouting of trade rules, before venting about calls for an aggressive transition to electric cars, which he said would leave the United States beholden to Chinese supplies of batteries and associated materials.

“I’ll tell you my biggest peeve right now is the whole thing with the EVs, the batteries, chips and all the different things. Rare earth minerals, processing, anodes, cathodes, everything that we need. If we’re ever going to get this industry up and running and be self-sufficient in North America, then we have to make sure they can’t dump on us,” the Energy and Natural Resources Committee chair said of Chinese producers.

“Right now, we’re about ready to put our whole eggs in one basket, thinking EVs are the way to go, and we’re going to be absolutely so taken advantage of, to the point to where we’re going to be held hostage by the foreign supply chain that China has a grip on,” Manchin said. “I just can’t believe we’re even thinking about going down that path, and I’m going to do everything I can to stop it. Because I think it’s stupid.”

Manchin continued, “We’re just held at a disadvantage because of the economy we have and the way we administer our economy.”

He told Tai, whose office can impose tariffs and other duties on foreign importers, “We depend on you all to crack hard and crack them down as tight as you can.”

Manchin’s comments were his latest sign of opposition to the Biden administration’s ambitions for electric vehicles, which the president wants to make up half of all car sales by 2030. They land in the midst of negotiations among Democrats over the clean energy details of a reconciliation measure, which stalled last year due to Manchin’s resistance.

It was unclear whether the senator’s remarks reflected opposition to any specific pro-EV policy, and Manchin’s office did not respond to E&E News inquiries yesterday. But the comments may signal a hard road ahead for striking a deal on a package with the type of clean energy supports that Biden, EV advocates and their Democratic allies want to see.

“The fact is that the transition to zero-emission transportation is all about multiplying baskets. It’s not ‘all eggs in one’,” said Genevieve Cullen, president of the Electric Drive Transportation Association (EDTA). “If we do this right, we are going to be making more diverse and more resilient supply chains. That’s why it’s called a transition.”

“From where I’m sitting, [Manchin’s comments] are a statement about the need for a comprehensive approach to the transition,” she added.

Manchin has often expressed skepticism about the electric vehicle transition. Earlier this year, he described himself as “very reluctant” to promote them due to foreign supply issues and called fatter tax credits for EV drivers — a key ask for advocates — “absolutely ludicrous,” given growing consumer demand for them (E&E Daily, April 29).

More recently, the senator has been playing defense against key Democratic priorities as part of ongoing reconciliation talks. This week, Manchin said the idea of expanded EV tax credits for unionized automakers — among the ideas pushed by Biden — had been dropped from talks, according to a report from Bloomberg.

Still, EV proponents have been floating other policies in hopes that they may catch on. Last week, for instance, chief executives at four major automakers wrote to Congressional leaders asking them to change a law that limits eligibility for EV tax credits to companies that have sold less than 200,000 electric cars (Energywire, June 14).

Joe Britton, executive director of the Zero Emission Transportation Association (ZETA), an EV advocacy group, said in an emailed statement to E&E News that the existing tax credit “needs to be as universally accessible as possible to catalyze American job growth and accelerate transportation electrification.”

“The biggest problem with the current EV tax credit is that it doesn’t allow GM, Tesla and most recently Toyota to offer it to consumers anymore. Ford will be in the same spot very soon. That is bad for U.S. manufacturing,” said Britton.

“Electric vehicles remain some of the most American-made cars and powering these vehicles with U.S. power generation will help sever our reliance on unstable global oil markets,” added Britton, in response to a question about Manchin’s comments at the hearing.

“Paired with investing in domestic battery production and accelerating critical mineral development, our electric vehicle sector is one the best opportunities to beat out our competitors, improve our energy security and ensure economic freedom.”

The hearing took place on the same day as the release of an International Energy Agency report that outlined issues facing battery supplies.

Key minerals like cobalt, nickel and copper have risen in price in 2021 and 2022 faster than any time in the 2010s, found the IEA.

And the Russian war in Ukraine is exacerbating doubts, since Russia produces over 20 percent of the world’s Class 1 nickel — although the country also churns out twice that percentage of palladium, used in gas cars’ catalytic converters.

At yesterday’s hearing, Manchin seemed open to a separate climate policy included in reconciliation talks: a carbon border adjustment, which would tax imports based on their greenhouse gas emissions.

“The reason we have Democrats and Republicans talking about a border adjustment, we think that’s the only level playing field we might have [against China],” he said.