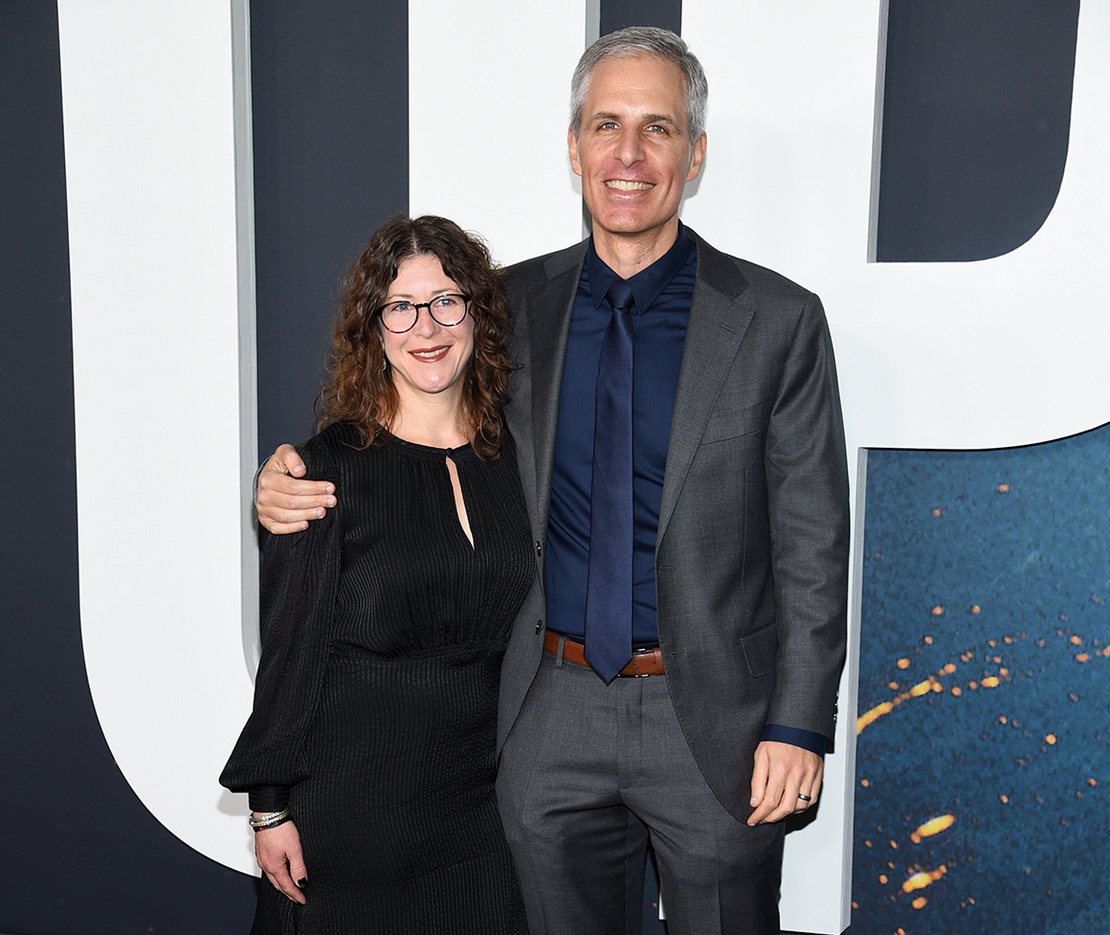 The wildly popular film "Don’t Look Up" was conceived as a cinematic allegory of the climate crisis.

But the star-studded Netflix movie — which began streaming on Christmas Eve and is now the platform’s third-most viewed film of all time — is also a surprising love letter to academics, bureaucrats and evidence-based decisionmaking.

"This is about whether or not we respect science," David Sirota, an investigative reporter, former Bernie Sanders staffer and co-writer of "Don’t Look Up," told E&E News in a Zoom interview last week.

Unlike some science fiction films in which meteors, rockets and space travel provide the "background" for the drama, he explained, the discovery of a 9-kilometer-wide comet hurtling toward Earth — and how the federal government and mainstream media struggle to grapple with the existential threat — is the central focus of the film.

"That was why I wanted to work on this movie," added Amy Mainzer, who spent two years as the film’s science adviser. She is a planetary science professor at the University of Arizona and works on several projects for NASA related to spotting asteroids and protecting the planet from them.

As the top scientific expert on a film about scientific experts, Mainzer spent countless hours advising Adam McKay, who wrote the screenplay and directed the movie, as well as the lead actors, Jennifer Lawrence and Leonardo DiCaprio.

Of course, there are comet deniers too. At political rallies and online, they chant "don’t look up."

Sirota came up with the idea of the comet-as-climate movie with McKay. The Oscar-winning director of the "Big Short" contacted him a decade ago after Sirota wrote an article for HuffPost about the North American Free Trade Agreement. They’ve kept in touch ever since and even hung out together on the night that Donald Trump won the presidency.

"It was a rough night," said Sirota, who urged McKay to use his satirical "superpowers to deal with climate" during the Trump years.

Sirota and Mainzer spoke with E&E News last week about the making of the movie, its mixed reception and the understated climate comparisons, which some viewers may have taken too literally or missed entirely.

How were you each involved in the making of this film?

Sirota: McKay and I went back and forth on a bunch of wild scenes. Some of it was in and a lot of it wasn’t. Like maybe they can’t get the asteroid bill through Congress because it’s a government shutdown. Then he was like, ‘I’m gonna go write it.’ Then it comes back like a month later. I read it, I gave him some notes and then quickly after that, he’s like, ‘I think DiCaprio wants to do this and Jennifer Lawrence.’ It was so fast, and I think it was because it was such a good script.

Mainzer: We had a lot of conversations over two years with the cast about everything from how do scientists think to what are our frustrations, what are our fears, what are some of the things we wish we could say?

Such as cursing on live television?

Mainzer: Yeah, how do you express your frustration without coming across as hysterical? The uneven burdens placed on people based on their identity, that’s another aspect of it that we talked a lot about. Not everybody is free to speak their minds.

Are there any specific scientific fingerprints you left on the film, Amy? You have been credited with including a figurine of astronomer Carl Sagan and the MIT hand double for DiCaprio’s equations.

Mainzer: I’m a big fan of tea, Carl Sagan and snacks. The snacks bit was for all the grad students out there. Anybody who’s ever had to work a night shift or struggle through grad school knows that you really need snacks. And so for someone to not be honest about the snack thing is very upsetting.

David, how did your experience in politics and the media inform the critiques that are in the film?

Sirota: Twenty-three years ago, the first experience I had working on Capitol Hill was for [then-Rep.] Bernie Sanders, where it felt like he was speaking all of these obvious truths about an unfair economy. But it was always a battle to get the most basic economic facts even acknowledged in the media conversation. And I saw that our political and media system is so broken, that even when you have the most obvious facts on your side — proving the reality that you’re describing — there’s no guarantee that they’re going to land.

Throughout this movie, the actual struggle of the scientists is to get the facts that they are putting out there, not just to be mentioned, but to land to make an impact, no pun intended. The comet works as an allegory because it is something physical, indisputable and governed by the laws of physics. But there’s that scene in the movie where the dad at the door says "no politics." And what’s funny about that is, the comet isn’t politics. It’s just a comet. That’s the same thing with climate: It’s not political. It’s physics and biology.

What are your thoughts on the film’s popular reception?

Sirota: Part of the reason this movie has gotten such an audience is because there’s a pent-up demand for content that explicitly acknowledges the dysfunction that is operating in an unstated way. Lots of people are scared about the climate crisis, and rightly so. But then when you start talking about it, it feels like a relief just to be willing to discuss something in a rational way and, in some cases, really to laugh at the ridiculousness of the system around it.

There are a lot of things going for this movie. It’s a comedy with a lot of celebrities. But ultimately, it is a science story. And if science and climate didn’t rate, you would not have gotten nearly the audience. My sincere hope is that success will open up more opportunities for science and climate-based content, whether feature films, documentaries, TV shows and the news.

Mainzer: I talked to a TV producer friend of mine who point blank told me, ‘Don’t bother making any TV shows about climate. They won’t sell.’ So the fact that we’re having this conversation says that’s wrong.

What do you say to critics who think a comet is a simplistic analogy for the climate crisis?

Some reviewers have noted that the billionaire character in the film seems to be modeled in part on tech entrepreneurs Elon Musk and Jeff Bezos. What do you make of his talk about the need to make humans a multiplanetary species?

Mainzer: The idea that you can just shift all 7 billion people on this planet — not to mention all the other forms of life here — off to another planet, it just doesn’t work. Maybe we’ve been a victim of our own success with regards to science fiction, making us think that effortless travel between planets is really truly easy. But it’s not, of course. Even if a small number of people are able to go to another planet someday, it’s certainly the case that everybody else is going to stay here.

When you spend all day looking at airless rocks, which is what I do with my asteroids work, planet Earth looks really amazing. It took billions of years to produce this wonderful planet. It would be absolutely mind-boggling to think that you could just leave it behind.

Aside from the head of the Planetary Defense Coordination Office (which the movie notes is a real agency), few federal workers were featured in "Don’t Look Up." Why weren’t bureaucrats, who have in the past reined in some of the worst impulses of past elected leaders, given a bigger role in the film?

Mainzer: There is an important nugget of hope that the movie encapsulates, which is that most people in the movie — from the civil service to the average people you see in the movie — want to do the right thing with a science-based approach. And there’s a critical point where somebody who has undue influence subverts the process of governance and takes responsible irresponsible action. Things just go sideways because one person is not supposed to have that much power.

But the point is, the civil service is represented and most people in my experience in government actually do try hard to do the right thing. It’s just you have to make sure that they are empowered to do their jobs.

E&E News subscribers include many of the politicians, corporate leaders and media figures lampooned in the film. What do you hope they take from it?

Mainzer: It’s a simple message: Make decisions based on the recommendations of science.

Sirota: Yeah, I would add to that, I hope they feel ridiculous when they see themselves, if they’re honest, in some of these scenes. The next time [those subscribers] are in a situation where there is a serious set of dire warnings from scientists and experts, [they] will feel a pang of ‘I don’t want to be the character in "Don’t Look Up" who makes an irresponsible decision.’