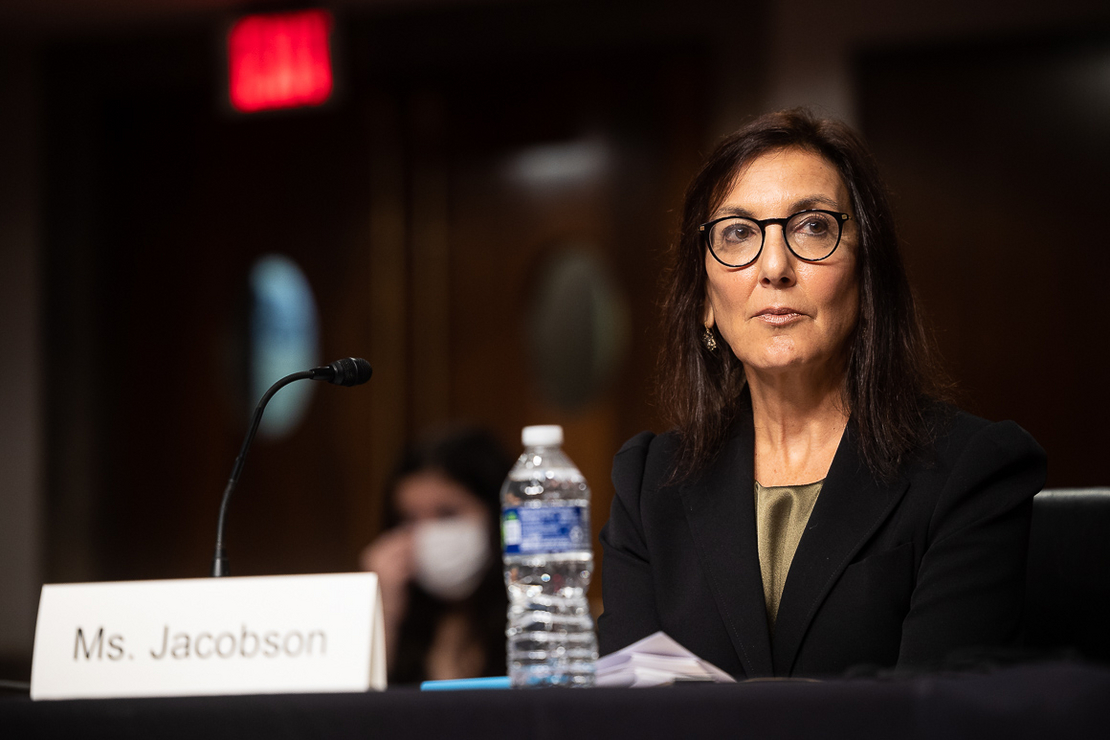 Once perceived as a sleeping bear on climate issues, the Defense Department has fully awakened to the realities of global warming as a threat to national security.

Under the direction of a half-dozen senior leaders, the Pentagon today may be the Biden administration’s most proactive Cabinet department at reducing carbon emissions, transitioning to clean energy and preparing for the impacts of climate change.

In less than two years, the Defense Department has released more than a half-dozen key assessments and reports — including climate action plans from each of the major service branches. Those efforts didn’t happen in a vacuum, nor do they propagate from one Pentagon office.

Here are six senior officials at the fore of the Biden administration’s revived and robust Defense Department climate policy.

Joe Bryan, chief sustainability officer and senior adviser to the secretary of Defense

Bryan, who this week is leading a Defense Department delegation to the United Nations climate change conference in Egypt (Climatewire, Nov. 1), arrived in Washington in 1999 as a legislative aide after two years in Africa, where he advised the governments of South Africa and Namibia on minerals and energy policy.

After four years as an aide to Democratic Sen. Carl Levin of Michigan, Bryan landed positions on the Senate Select Committee on Intelligence and Armed Services Committee, where he oversaw investigations. President Barack Obama tapped him in 2014 to be the Navy’s deputy assistant secretary for energy. He joined the Biden administration in 2021, first as senior adviser to the secretary of Defense on climate and more recently as the Pentagon’s chief sustainability officer.

In public comments last April, Bryan addressed what he says is the misguided perception that climate protection and national defense are incompatible. “There’s been an idea out there by some that there’s competition between what’s good for the climate and what’s good for the mission. We believe that that is a false choice,” he said.

Bryan, a non-military civilian appointee, has been hawkish about the Defense Department meeting climate goals, as he made clear last January when said the Pentagon would not declare a national security exemption from an executive order requiring all government agencies to cut greenhouse gas emissions. “There’s no blanket exemption; the department is working hard,” he said (E&E News PM, Jan. 13).

An Army veteran and West Point graduate, Kidd has been instrumental in identifying and responding to climate impacts on military operations and readiness. He helped shape the Pentagon’s 2021 Climate Adaptation Plan, which he described in a recent interview with WashingtonExec as “intended to change the institution of the Department of Defense” and “ingrain climate considerations across the department.”

Kidd’s civilian career began with the United Nations, where he was a senior official and program manager “overseeing efforts to provide humanitarian relief and post-conflict assistance to societies impacted by war,” according to his LinkedIn profile. He also was country director for the U.N. World Food Programme in Tajikistan and Moldova, and led efforts by the U.N. High Commission for Refugees “to improve supply chain management and decision support modeling for complex humanitarian emergencies.”

“While my efforts in these roles had impact, they addressed the symptoms of conflict and not underlying causes,” Kidd wrote in a LinkedIn biography. “Accordingly, I executed a mid-career transition to focus on resource efficiency, energy resilience, and sustainability; working to build a more secure and resilient future.”

He joined the Department of Energy in 2008 as an energy efficiency and renewables program manager and spent much of the last decade as a deputy assistant secretary of the Army with a brief stint in the Obama White House as chair of the newly created Federal Permitting Improvement Steering Council. The council was established by Congress in 2015 to help coordinate and streamline agency permitting of large infrastructure projects.

At the Defense Department, Kidd shoulders a cross-cutting list of responsibilities including energy and climate resilience, pollution prevention and remediation of contaminated sites, and management of cultural and natural resources.

As assistant secretary, Dalton will oversee one of the Defense Department’s most critical climate challenges — navigating the future in a fast-warming Arctic.

In a recent Army press release, Dalton said U.S. “allies, partners and competitors are assessing the implications of climate change on their respective strategic objectives,” adding that such challenges will require close cooperation between U.S. allies and partners.

Last month the Biden administration issued a “National Strategy for the Arctic Region” and will name a State Department ambassador to negotiate Arctic issues, including climate change and national security, with leaders of seven other countries, including Russia, which with China is eyeing new navigation channels created by melting ice.

The plan says the United States will “defend our interests” in the region and “uphold international law, rules, norms, and standards in the Arctic.”

Dalton previously served as senior adviser for force planning; special assistant to the undersecretary of Defense for policy; policy adviser to the commander of the International Security Assistance Force in Kabul, Afghanistan; and country director for Lebanon and Syria in the Office of the Undersecretary of Defense for Policy. She also served as an intelligence analyst at the Defense Intelligence Agency.

Rachel Jacobson, assistant secretary of the Army for installations, energy and environment

Jacobson worked under four presidents, including Republicans George H.W. Bush and George W. Bush, mostly as a litigator in the Justice Department’s Environment and Natural Resources Division. During the Obama administration, she joined the Interior Department as principal deputy solicitor and then acting assistant secretary before joining the Pentagon as deputy general counsel for environment, energy and installations from 2014 to 2016.

During the Trump presidency, Jacobson joined the law firm WilmerHale. Since her April swearing-in, Jacobson has engaged in the Army’s Herculean effort to replace fossil fuel power with clean energy resources, including for non-tactical and tactical vehicles; the deployment of microgrids on Army bases; and addressing climate impacts on water quality and availability.

In a recent interview with E&E News, Jacobson said the Army’s climate goals are “about readiness fundamentally.”

“If our assets are vulnerable to climate change, because of wildfires, because of flooding and other natural disasters, that’s a threat,” she said (Greenwire, Sept. 28).

Jacobson also has initiated efforts with the U.S. Military Academy to better educate future Army officers on climate change causes and effects as well as measures to beat back climate impacts (Greenwire, Oct. 12).

Meredith Berger, assistant secretary of the Navy for energy, installations and environment

Berger joined the Biden administration from Microsoft Corp., as the Navy’s senior official overseeing environmental policy. A former deputy chief of staff to then-Navy Secretary Ray Mabus and Defense Department fellow under the Obama administration, Berger has zeroed in on climate change readiness at the Navy’s military complexes, particularly in coastal zones where the Navy and Marine Corps operate some of the department’s most exposed bases to extreme storms and sea-level rise.

“To remain the world’s dominant maritime force, the Department of the Navy must adapt to climate change: We must build resilience and reduce the threat,” Berger said at a press briefing last May when the Navy rolled out its “Climate Action 2030” plan. “Climate readiness is mission readiness. And by building a climate-ready force, our sailors and marines will be able to fight and win anywhere in the world and under any conditions” (Climatewire, May 25).

A Florida native, Berger previously worked for the state Department of Financial Services on climate, energy and housing before moving to Washington as a policy adviser to EPA after the BP Deepwater Horizon oil spill in the Gulf of Mexico. She joined the Defense Department in 2012, first as a fellow, then as deputy chief of staff. She has also been affiliated with the Harvard Kennedy School’s Belfer Center for Science and International Affairs.

At Belfer and then Microsoft, she led digital security projects designed to protect governments, voters and democratic institutions from cyberattacks and election interference from hostile agents.

Oshiba is a retired Air Force colonel with more than 30 years of service in both active-duty and civilian roles. From 2018 to last February, he was director of resource integration and deputy chief of staff of logistics, engineering and force protection at Air Force headquarters in Arlington, Va.

Before that, he held various leadership positions in the Air Force’s civil engineering, logistics, installations and mission support services. An Afghanistan War veteran, he commanded the 577th Expeditionary Prime BEEF Group at Bagram Airfield from 2010 to 2011 and has held posts at more than a dozen domestic and overseas air bases.

As acting assistant secretary, Oshiba has guided the Air Force through infrastructure strengthening and resilience and adaptation projects at major domestic bases, notably Tyndall Air Force Base in Florida, which is undergoing a $5 billion reconstruction after being destroyed by Hurricane Michael in 2018. The Air Force has dubbed Tyndall the “Installation of the Future” whose climate resilience measures can be replicated at other U.S. military facilities.

On a recent panel hosted by the Center for Climate & Security, Oshiba said the Air Force’s climate focus is more than just good environmental stewardship. “Make no mistake, this isn’t climate for the climate’s sake or energy for energy’s sake. It’s about maintaining our ability to fly, fight and win.”

Oshiba is expected to step down pending Senate confirmation of Ravi Chaudhary, a 20-year Air Force veteran and former senior executive with the Federal Aviation Administration.

Correction: An earlier version of this story misidentified the Biden administration’s nominee for assistant secretary of the Air Force for energy, installations and environment. Ravi Chaudhary is awaiting Senate confirmation for the post.