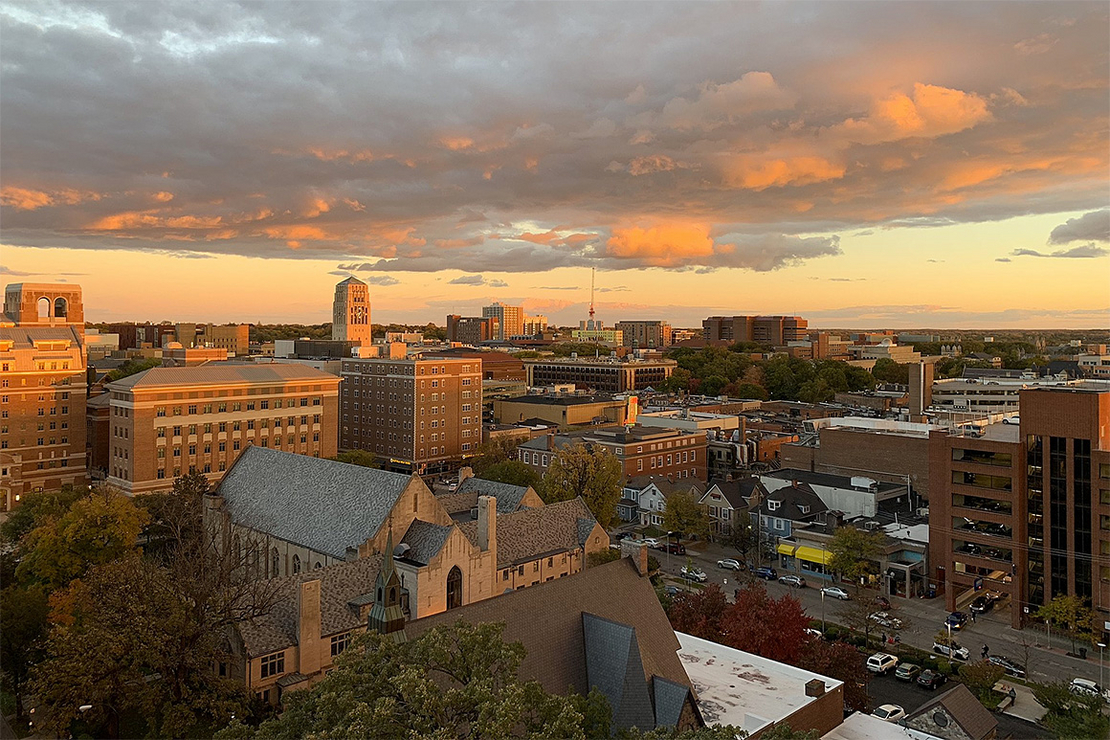 When Ann Arbor, Mich., passed a plan a little over a year ago to make the city carbon-neutral by 2030, it meant pivoting as quickly as possible to clean energy, including across the campus of the University of Michigan.

The carbon-neutral goal for the city of 120,000, dubbed A2ZERO, means outpacing Gov. Gretchen Whitmer’s (D) plan for the state of Michigan to achieve the same target in 2050. And it means moving faster than Ann Arbor’s electricity provider, DTE Electric, which also has a 2050 net-zero emissions target.

So how does a progressive, midsize city go green while the state and the power company remain tethered to coal and natural gas? For Ann Arbor, the answer is: If the monopoly utility won’t speed up the energy transition, do it yourself.

The city is looking to compete with DTE by forming what’s called a sustainable energy utility, or SEU, a municipal model hatched in academia and first put into practice in Delaware in 2007. The idea is to build a nonprofit, community-based electric company whose mission is to generate renewable power and to conserve energy.

But in this instance, Ann Arbor has a more sweeping concept in mind. The city wants to incorporate battery storage and tie homes and businesses to micro- and nanogrids. The city wants to encourage energy efficiency and the use of geothermal heat pumps as an alternative to heating homes with natural gas. It wants to populate the streets with electric cars.

Ann Arbor wants to reimagine what a local power company can be, as cities increasingly push for more ambitious carbon reductions than the midcentury net-zero emissions goals that have become the language of climate mitigation in America.

“It’s a nice sentiment to set goals, but how are we going to achieve them?” said Missy Stults, Ann Arbor’s sustainability director.

Ann Arbor has found it difficult to leverage DTE’s franchise agreement with the city to meet the type of clean electricity goals adopted by Minneapolis and Boulder, Colo. The reason is a century-old Michigan law that gives DTE a perpetual right to provide the city with electricity.

Yet there’s a hitch: DTE’s franchise isn’t exclusive, which means the city could compete with its incumbent utility.

While building a duplicate distribution grid was a nonstarter, Stults wondered what the city could do without relying on poles and wires.

“With distributed energy resources, I thought maybe this is actually possible. Maybe we could provide a supplemental utility in which we don’t actually focus on distribution, or we focus on limited distribution. And instead, we focus on the generation.”

The city had local experts work on a technical and legal analysis to determine if it was doable. She said the answer to both questions was “yes.”

“What our modeling shows is that it is affordable, at least cost-competitive,” she said.

Stults acknowledges there’s still a lot of work to be done and questions that need answers, but everything so far points to a parallel utility being a viable pathway for Ann Arbor to meet its climate goals.

To be sure, other cities will be watching.

Ann Arbor is among dozens of U.S. cities of all sizes that are looking to push the pedal on slashing energy sector emissions. While President Biden and Democratic governors, including Michigan’s Whitmer, have sought to make addressing climate change a priority, Congress and state legislatures haven’t moved as quickly, if at all.

But pledging to transition to 100 percent renewable energy and achieving it on a communitywide basis (versus just city-owned buildings) is easier said than done, said Lacey Shaver, who helps cities meet renewable and decarbonization goals at the World Resources Institute.

In deregulated states such as California, New York and Ohio, cities can choose to buy green energy through community choice aggregation programs. But so-called CCAs aren’t allowed in most states, such as Michigan, though Ann Arbor has urged the Legislature to change that.

In fully regulated states, where utilities own the power plants, cities are becoming more actively involved in regulatory proceedings that help determine the electricity fuel mix.

“Cities can really push in these proceedings and try to advance the uptake and saturation of renewables maybe beyond what is the status quo,” said Alex Dane, manager of city renewable energy solutions for WRI.

A good example, he said, is Minneapolis, which pushed Xcel Energy Inc. to drop plans for a large new natural gas plant at the site of an existing coal plant outside the Twin Cities. Just this month, Minneapolis also filed comments at the state Public Utilities Commission urging Xcel to deploy battery storage as a substitute for two gas peaking plants that Xcel chose as an alternative.

A small but growing number of cities are also looking to incorporate their clean energy goals and other policy objectives into municipal franchise agreements.

Jeff Cook of the National Renewable Energy Laboratory in Boulder, helped conduct a 2019 national study of utility franchise agreements — contracts that give a utility the right to provide service within a jurisdiction — and how incorporating clean energy goals could help accelerate renewable deployment.

The study found “immense opportunity to leverage franchise agreements to achieve renewable energy objectives,” but also that it requires cities and utilities to work together.

“I would argue it is the starting point, it is not an endpoint to achieve these goals,” Cook said. “It has been used to foster dialogue, start partnerships and work toward the common end in the context of trying to reach 100 percent renewable goal.”

Cook said Minneapolis; Denver; and Sarasota, Fla., are examples of cities that have successfully incorporated their goals into utility franchise agreements. Salt Lake City even worked alongside its utility, Rocky Mountain Power, to get legislation passed.

Generally, renewable energy goals aren’t included in utility franchise agreements, but are part of companion agreements. Sometimes cities will commit some part of franchise fees, often a percentage of revenue generated within the city, to achieving clean energy goals.

Some cities have looked at going even further — the municipal takeover.

Often, as in the case of Chicago recently, it doesn’t get very far. Taking over a utility’s distribution system generally means a long, costly battle as poles, wires, substations and other assets must be acquired through eminent domain proceedings.

The Windy City did a study and found that municipalization would lead to electric rates that were 43 percent higher than they paid incumbent provider Commonwealth Edison Co. Instead, Chicago issued a request for information in April to evaluate alternative electricity providers.

Mayor Lori Lightfoot said the request doesn’t mean the city wouldn’t negotiate a new franchise agreement with ComEd. Instead, she called it is a “due diligence effort” to get the best deal possible for Chicago residents and the city’s policy goals, which include clean energy.

Back in Ann Arbor, Stults, the sustainability director, is focused on the next steps if the city decides to move forward, including figuring out a governance structure and financing. The City Council would also need to pass an ordinance to create the SEU. And if the city is going to incur debt, a vote would be required to authorize it.

The city held a Zoom meeting in early November with interested residents to explain the concept and answer questions.

One interested party with many questions? Detroit-based DTE, which would still own the poles and wires and be responsible to supplying whatever power the Ann Arbor SEU doesn’t generate locally.

About half of DTE’s electricity supply was generated from coal in 2020, according to the utility, with about 10 percent generated from wind and solar power.

Brian Calka, DTE’s director of renewable solutions, said the utility has a long history of working with Ann Arbor and only recently got approval from Michigan regulators to build a 20-megawatt community solar project on a capped landfill site and greenfield site owned by the city.

Calka said the energy produced will be used to help Ann Arbor and a neighboring township meet their renewable energy goals.

DTE and the city have also discussed a much larger solar development: a 440-MW project sized to offset all of Ann Arbor’s communitywide energy use, he said.

How, or if, a large solar project fits with the city’s vision for a parallel utility is unclear at this point.

Calka said DTE was initially unaware the city was looking at the concept of an SEU. “It caught us by surprise,” he said.

Even after the city issued a 40-page report last month, DTE still has unanswered questions. They include whether the utility would be responsible for maintaining enough generation capacity to meet 100 percent of the city’s energy needs, and how city-owned generation would interact with DTE’s local grid.

Stults said the idea for a parallel utility that would compete with DTE isn’t about trying to disrupt a century-old business model. It’s about achieving the city’s policy goals.

“If our utility offered these services, we wouldn’t have to,” she said. “If they had the same ambition and the same options on the table as what we’re talking about, we wouldn’t be having this conversation. So offer what we want, offer it at an affordable price and equitable manner. And maybe we don’t have to pursue this.”