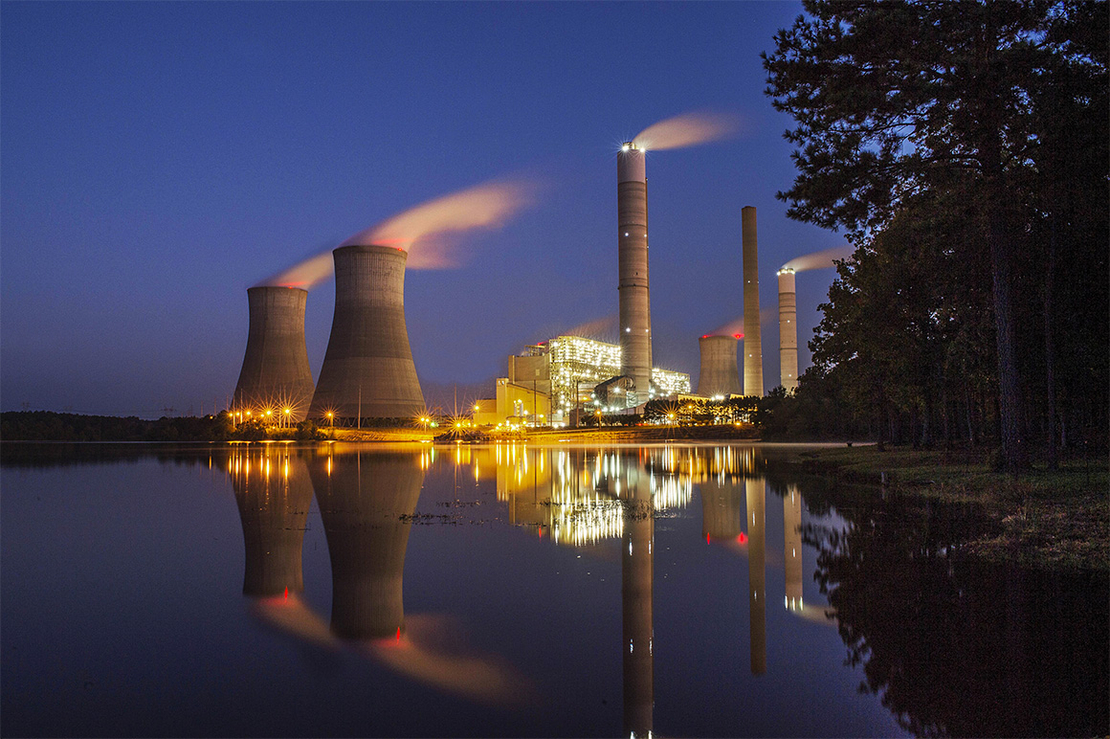 Southern Co. announced yesterday that it will shutter roughly 55 percent of its coal fleet by the end of the decade as the company shifts to a net-zero electricity mix.

The closures include units at the nation’s two largest coal-fired power plants, as well as the previously announced Plant Daniel, one of the last coal generators in Mississippi. The move will reduce the amount of coal on Southern’s system by 80 percent since 2007, company CEO Tom Fanning told Wall Street analysts yesterday.

Atlanta-based Southern — the nation’s third-largest utility — once operated 66 generating units of coal, producing 20,450 megawatts across its Southeastern territory. It now operates 18 units producing 9,799 MW, according to the company. Once these additional units are closed, that figure will fall to roughly 4,300 MW at eight units, Fanning said.

The coal shutdowns stem from federal wastewater regulations for power plant discharges, which can contain high levels of toxic chemicals like mercury, arsenic, nitrogen and selenium.

Alabama Power and Georgia Power, which are Southern subsidiaries, filed documents signaling their plans with state environmental agencies on Oct. 13 regarding the effluent limitation guidelines. Company executives said earlier this year that all but two of its coal plants comply with those rules (Energywire, May 27).

Electric companies across the country were required to tell EPA last month whether they will spend money to keep their coal units running, close them or do enough upgrades to meet the federal standards so they can operate roughly 10 percent of the time.

The move comes as Southern aims to reach corporate goals for net-zero emissions by 2050. It has hit its target to cut emissions in half a decade earlier. Separately, the Biden administration has called on the power sector to decarbonize by 2035.

Environmental and consumer advocates also have been pressing utilities such as Southern to remove fossil fuels from their power grids and replace the electricity with a combination of renewables and storage.

House Democrats, meanwhile, continue to push for the Senate’s support of a $1.7 trillion reconciliation package, which contains a wide range of tax incentives for clean energy, including renewables and nuclear, in hopes of achieving the president’s goal.

In an interview, Fanning said his company is “constantly engaged” in developments on the congressional infrastructure and reconciliation packages, noting the “enormous push and pull of public policy on both sides of the aisle.”

“Both of those [bills] obviously have tactical impacts to the electric utility industry, whether it’s the specific initiative to promote this transition to a net-zero future,” Fanning told E&E News. “Also I would say that ideas that relate to customer bills are particularly important to us.”

State environmental and utility regulators in Alabama and Georgia must sign off on the company’s plans. Georgia Power will include more details about its long-term energy projections in an integrated resource plan filed next January. Alabama Power will follow suit in a similar planning process next fall.

Georgia Power plans to remove roughly 3,000 MW of coal in the state, including two of the four units at Plant Bowen and one at Plant Scherer, which is the largest coal plant in the country. Once that unit at Plant Scherer closes by 2025, the amount of electricity from coal at that power plant will be cut in half.

Separately, Florida Power & Light Co. and Jacksonville, Fla.’s electric company, JEA, agreed earlier this year to shutter the unit that they jointly own at Scherer by 2022 (Energywire, June 30, 2020).

Georgia Power is a minority owner of Scherer’s first two units. The main owners are Oglethorpe Power Corp.; the Municipal Electric Authority of Georgia; and the city of Dalton, Ga.

“We kind of have to follow what the majority owner wants to do there,” Fanning said.

Also, the utility’s Greene County natural gas steam generator plant will close in 2025 and 2026, according to yesterday’s announcement. That power plant is jointly owned by Alabama Power and Mississippi Power, which said earlier this year it will exit its 40 percent portion of Greene County as part of its plans to remove roughly 950 MW of fossil fuels from its generating fleet (Energywire, April 19).

On the conference call, Fanning also discussed Southern’s high-profile nuclear project, Plant Vogtle. Georgia Power last week said the schedule for Vogtle’s reactors has slipped another three months, and yesterday Southern said it would write off $197 million after taxes for those rising capital costs, which are now roughly $9.5 billion.

Additionally, a battle may be brewing over how much each of Vogtle’s four owners must pay for the project’s rising costs. At issue is how Georgia Power and the public power utilities that are Vogtle’s co-owners are interpreting an ownership agreement signed in September 2018.

At that time, Southern and Georgia Power agreed to take on more risk should Vogtle’s construction costs rise above certain thresholds (Energywire, Sept. 27, 2018).

Now, Georgia Power and the owners do not agree on two things: whether they’ve reached that monetary benchmark and how much COVID-19-related costs played a role.

Georgia Power has said that benchmark starts at $18.38 billion and that the estimated project costs haven’t reached that level, according to yesterday’s SEC filing. The other owners disagree, arguing that costs through Sept. 30 have triggered certain provisions of the 2018 ownership agreement, including one that could cost Georgia Power $350 million.

The owners agreed on Oct. 29 to “clarify the process.” Fanning declined to elaborate to analysts and to E&E News.

“We certainly have an opinion on what all that means, and they have raised recently a difference of opinion,” he said, declining to say whether it’s all or some of the other developers that do not agree.

Vogtle’s original price tag was $14 billion. Delays stemming from a litany of vendor and contractor problems have pushed the amount to more than $28 billion.