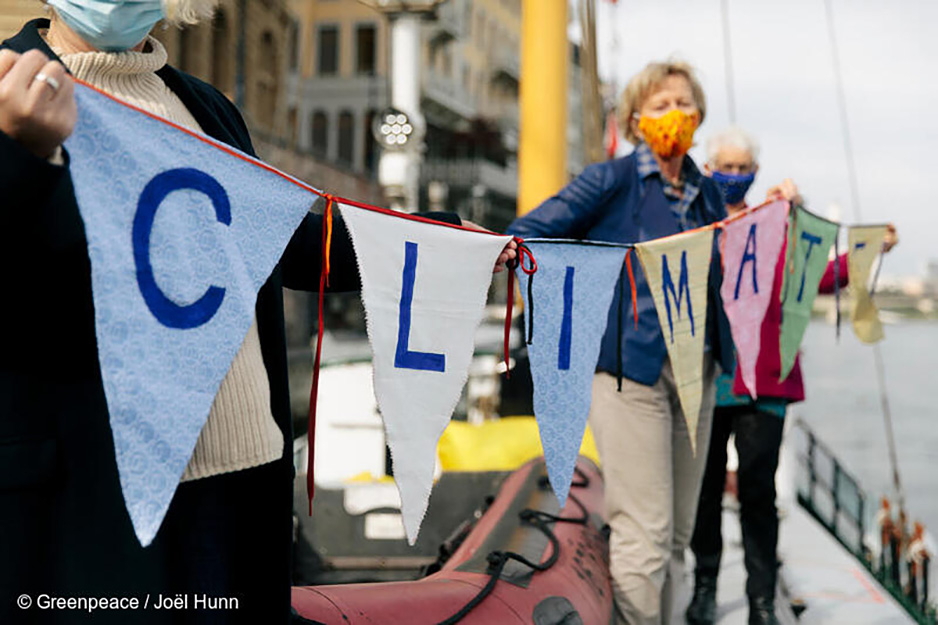 Activists with Senior Women for Climate Protection Switzerland have filed a climate lawsuit with the European Court of Human Rights. Joël Hunn/Greenpeace

Lawsuits brought by women against governments in Pakistan and Switzerland over failures to curb greenhouse gas emissions could be harbingers of a new avenue for climate litigation.

Since the cases were filed in 2018 and 2019, studies are increasingly finding that women are disproportionately affected by the ravages of climate change, and efforts to address gender inequity in policy are growing (Climatewire, May 10).

The United Nations in March issued its first report on the links between rising emissions and gender equality and pledged to put women and girls at the center of climate and environmental policy.

“Women traditionally face barriers and obstacles in normal situations, but they are increased with extreme climate-fueled weather,” said Lorena Zenteno Villa, a Chilean attorney who focuses on human rights and climate change. “It’s not something that I’m going to be surprised if I start seeing an increase in the number of these cases as women find their voice and see that they can be effective for climate change.”

Villa noted that women have pursued a number of environmental damage lawsuits in Latin America, including Colombian women who have petitioned the courts to stop use of pesticides they say raise the risks of miscarriage.

Several researchers who track climate litigation say it’s premature to predict that women-centered cases will become a trend. But with climate lawsuits on the rise globally, they say the efforts bear watching.

“It’s not very common, but it’s starting to grow,” Villa said at a recent conference sponsored by Columbia University’s Sabin Center for Climate Change Law when asked about gender-focused challenges.

Interest in gender-based litigation comes as the U.N. Commission on the Status of Women this year focused on equality in climate, environment and disaster risk reduction — and as the Intergovernmental Panel on Climate Change, the world’s foremost scientific body on global warming, has pledged to diversify and include more women in its work (Climatewire, Aug. 2, 2021).

The U.N. discussions included involving LGBTI persons in any discussion of climate change, with Sarah Schlitz — Belgium’s secretary of state for gender equality, equal opportunities and diversity — calling it “crucial” to address impacts for that community.

U.N. Secretary-General António Guterres noted at the opening of the Commission on the Status of Women in March that research shows that women and children are up to 14 times more likely than men to die during a climate disaster.

Yet, he said, only a third of 192 national energy frameworks include gender considerations — and women are rarely considered in climate financing.

But, he added: “Women lawyers are speaking up for the vulnerable and taking on powerful business interests that threaten their livelihoods.”

Environmental Defenders Office, an Australian law firm that represents community groups in climate litigation, frequently works with clients who are women, Matt Floro, an attorney with the office, said at the Sabin Center panel.

“Most of our representatives are strong women, and it’s fantastic to see,” Floro said.

The bush fires advocacy group, led by Jo Dodds, filed suit in 2020 after a devastating summer of blazes that burnt more than 50 million acres across the continent (Climatewire, April 21, 2020).

“It’s a powerful case, the first time in Australia that a community group has won a case against the government, successfully arguing the government is breaching its statutory duty,” said Environmental Defenders Office General Counsel Jo-Anne Bragg.

She noted that Australian courts are increasingly focused on groups most vulnerable to climate change, including Indigenous people, low-income communities, youth and women.

Another recent high-profile case in Australia — which Environmental Defenders Office was not involved with — was brought by a group of high school students who are mostly girls. The students — joined by Sister Brigid Arthur, an 88-year-old nun and former teacher who volunteered to be their litigation guardian — had argued that the government had a “duty of care” to protect the young people by rejecting the expansion of a coal mine.

An Australian court this year found that the nation’s environment minister does not have a legal duty to protect young people from climate change (Climatewire, March 16).

But Floro noted the challengers contend that “there remains a moral duty of care, and certainly women and girls will be a big part of that.”

Switzerland’s gender-based climate challenge — which a court dismissed in 2018 — got a significant boost late last month when the Grand Chamber of the European Court of Human Rights announced it would review the case — a rare decision that suggests the court’s 17 judges believe it raises a “serious question” under the European Convention on Human Rights.

A judgment by the court would only bind Switzerland, but it could also set a precedent for the 40 other European countries.

“If it’s a successful outcome for the applicant, it could have a real impact in terms of future litigation,” said Linnéa Nordlander, a postdoctoral researcher on human rights and climate change at the University of Copenhagen’s law school. “It might not dictate, but it may influence the extent to which we see gender-based litigation, at least in Europe and maybe internationally.”

Nordlander noted the bar for success for such cases is formidable, including a need to establish standing in court.

“There are a lot of challenges in these cases, and victim status is one of them,” she said. “As in some of the children’s cases, some of what they’re arguing about is future impacts, and human rights law isn’t really adjusted for that. It can take it into account, but it tends to be quite retrospective.”

Union of Swiss Senior Women for Climate Protection v. Swiss Federal Council was brought by a group of older women who say they’re disproportionately hurt by their government’s failure to do enough to curb greenhouse gas emissions.

Another international case, Maria Khan v. Federation of Pakistan, involves a group of female petitioners who sued the Pakistani government in 2019, arguing that the consequences of global warming — made worse by the country’s rapidly increasing greenhouse gas emissions — will have greater effect on women because of social constraints that provide them with fewer opportunities than men.

“They tend to possess fewer assets than men and depend more on natural resources for their livelihoods,” the complaint said. “In time of a disaster, women are more likely to suffer due to their limited access to financial, natural, institutional or social resources and often due to social norms and ethos.”

Justice Ayesha Malik of Pakistan’s Supreme Court, who was asked about the women’s climate cases at the Sabin Center conference, said the nation’s climate jurisprudence is just beginning.

“The biggest contributor of these cases … is introducing the idea of climate justice,” said Malik, who made history in January when she was sworn in as the first woman judge on Pakistan’s high court. “In due time, there are bound to be cases because we have a lot of problems with extreme weather, with floods, with high heat, which affect women and affect lifestyles of women.”

Gender-based climate claims are more common in international courts than in the United States, where the judiciary has been less receptive to arguments based on human rights that are included in many other countries’ constitutions.

Catherine Higham, who coordinates the Climate Change Laws of the World project at the London School of Economics and Political Science, said researchers anticipate an increase in challenges to how climate policy is designed — including who is consulted — and some of that could fall along gender lines.

“There could potentially be strong arguments involving women if there are circumstances in which a policy is designed without any gender implications in mind, which is not an uncommon occurrence,” Higham said. “As we move toward a world where it’s accepted that we have to take action, litigation is likely to shift into, ‘What kind of action are we taking, and who is being brought to the table when the action is developing?'”

Unlike in the United States, the European Union incorporated the objectives of the 2015 Paris climate agreement into domestic law, and those laws can be challenged in European courts. Two Italian women have recently filed cases at the European Court of Human Rights, arguing that they are affected by climate change.

“I would not be surprised if there are some particular arguments about the vulnerability of those plaintiffs being kind of front and center,” said Higham, who has not yet reviewed the legal pleadings.

Julia Olson — who leads Our Children’s Trust, which represents young people who are challenging U.S. governments at the state and federal level — said the rights-based litigation that the Oregon-based firm helped launch has largely been pushed by female attorneys “and a lot of moms.”

She noted that she and Andrea Rodgers, co-counsel on the firm’s best-known case, Juliana v. United States, have relied on the work of Mary Wood, a University of Oregon law school professor who has championed expanding the notion of “public trust” to include the atmosphere.

“A lot of women and mothers carry a lot of the burden of dealing with climate harm,” Olson said. “And if there is discrimination against girls and women, climate is only going to exacerbate that.”