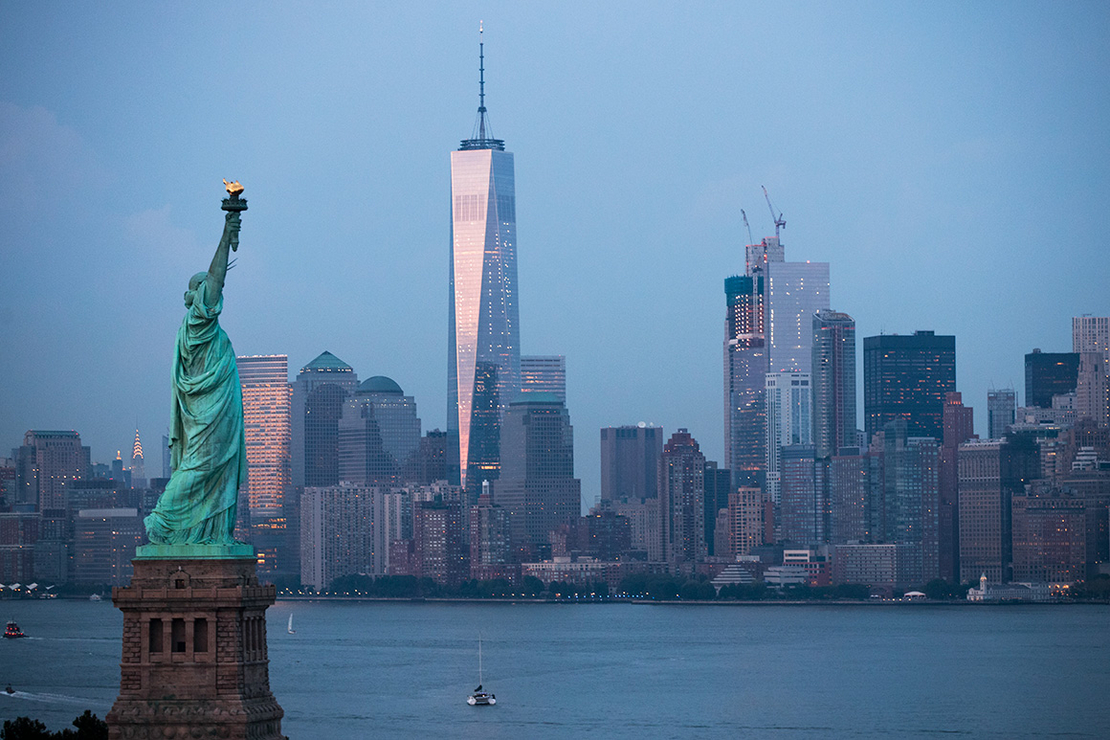 The Statue of Liberty stands in the foreground as New York City is viewed at dusk. The New York State Department of Financial Services released guidance yesterday detailing how it expects insurers, which are uniquely impacted by climate change, to manage the mounting threats they face. Drew Angerer/Getty Images

New York’s top financial agency yesterday became the first state regulator to lay out in detail how it expects the insurance industry to handle global warming.

The final guidance unveiled by the New York State Department of Financial Services says insurers based in the state need to do so in several ways. Principal among them: disclose the risks they face from extreme weather events and the clean energy transition; consider those same threats when making business decisions; and conduct scenario analyses to gauge climate change’s capacity to spur losses in the short-, medium- and long-term.

The regulator, which oversees New York-based insurers, banks and other finance institutions, said it would monitor insurers’ progress on those points and others in the coming months.

By August of next year, for instance, the agency expects insurers to have incorporated climate risk management into the structure of its board and company leadership. That could entail appointing someone with climate expertise to the board, and selecting a top executive to spearhead the company’s work around climate change.

“Climate change is an urgent issue that poses wide-ranging and material risks to the financial system. Insurers, which are uniquely impacted as climate change affects both sides of their balance sheets, also play a critical role in managing climate risks,” Adrienne Harris, the agency’s acting superintendent, said in a statement.

"The guidance is intended to support insurers’ efforts to manage the financial risks from climate change, bolstering the safety and soundness of the industry and the protection of consumers," Harris added.

The agency, which first issued proposed climate-related guidance last March, has long been a leader when it comes to pushing the financial sector to account for rising temperatures.

Just over a year ago, the New York State Department of Financial Services wrote letters to all the firms it oversees — in addition to insurers specifically — to direct them to begin integrating climate change into their risk management processes. And last February, the agency said it would incentivize banks and credit unions to invest in projects that boost climate resilience in underserved communities (Climatewire, Oct. 30).

The agency also has been among a small but growing cohort of state regulators that require insurers to complete an annual climate risk survey. The attempt to enhance climate-related disclosure began over a decade ago, when New York, Washington and California adopted the practice despite resistance from some conservative commissioners and industry groups (Climatewire, Sept. 7).

The survey, which has now been adopted by more states and now covers roughly 80 percent of the industry, has been helpful in highlighting the insurance sector’s climate vulnerabilities and awareness. But some observers say the effort isn’t enough to ensure insurers are quickly preparing for the economic realities of a warming world.

According to Steven Rothstein, a managing director at the environmental nonprofit Ceres, the agency’s decision to issue formal guidance on the topic is a first step in the right direction.

“Insurance companies are unique in [that] they’re both one of the most impacted by this, by climate issues, but they’re also a significant contributor,” Rothstein said, referring to the sector’s exposure to natural disasters and potential to either thwart or facilitate the clean energy transition via investment and underwriting.

“It sends clear and unequivocal guidance about the importance of climate from this important regulator,” Rothstein added. “Because it’s New York, because it’s so large, we hope it will have an impact around the country.”