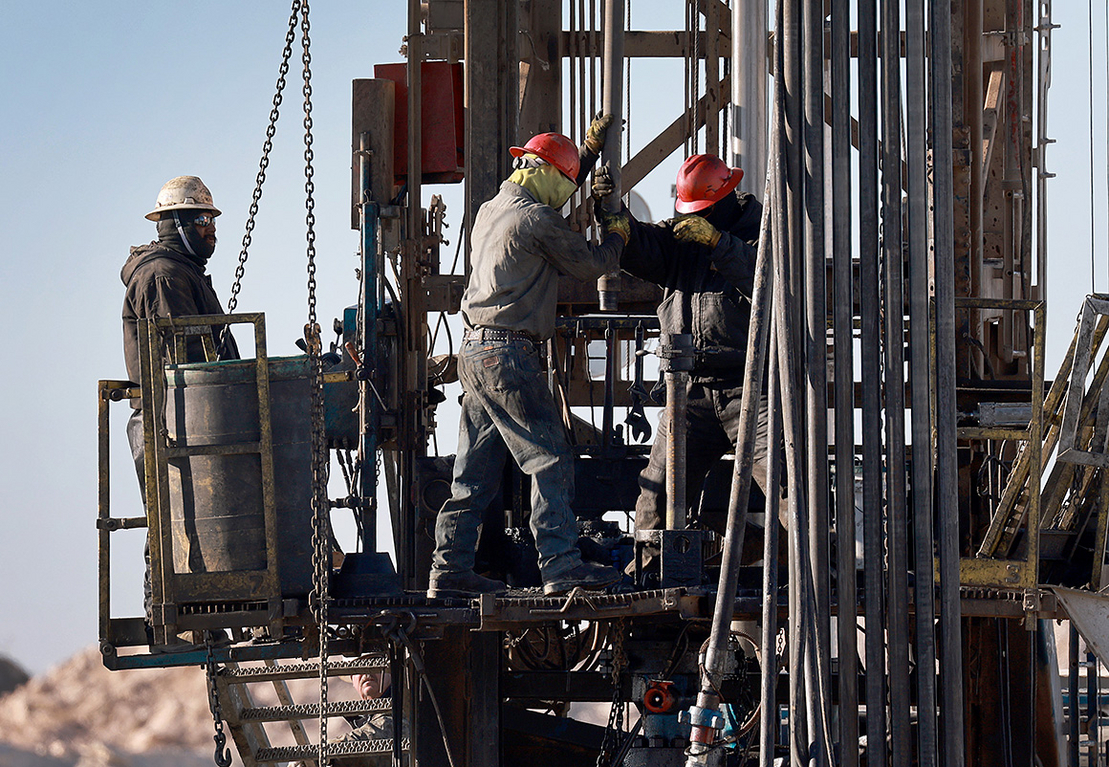 Workers placing pipe into the ground on an oil drilling rig in the Permian Basin in Midland, Texas. Joe Raedle/Getty Images

Oil field jobs, which plummeted during the pandemic and recession two years ago, haven’t recovered even though the oil industry itself is back on its feet and many companies are recording healthy profits.

Overall employment in the sector increased to about 633,000 jobs in June, which is still about 10 percent lower than the pre-pandemic level of about 707,000, according to the Energy Workforce and Technology Council, a trade group.

In Texas, the biggest oil producing state, the industry employed about 334,000 workers in April, compared to about 371,000 before the pandemic, according to the Institute for Energy Economics and Financial Analysis. In comparison, Texas’ crude output, at 5 million barrels a day, has almost fully recovered to its pre-pandemic high.

Exxon Mobil Corp. has told investors it could report record some of its best earnings when it releases financial results this week, driven by surging gasoline and diesel prices (Energywire, July 5).

While the oil industry is having the same trouble as other industries finding qualified workers, the trend shows that oil field employment is undergoing a structural change, said Trey Cowan, an analyst at IEEFA who studied the Texas numbers.

The Biden administration’s plans to curb fossil fuel use and address climate-warming pollution have driven some workers away from the oil industry, said Leslie Beyer, CEO of the Energy Workforce and Technology Council.

She agreed with Cowan, though, that the industry is embracing new technology that will reduce the number of jobs in the oil patch (Energywire, April 23, 2019). For example, drilling rig operators now routinely steer their drill bits from control rooms that are located miles from the oil field. Companies are experimenting with drones and other high-tech equipment to inspect pipelines and other installations.

The trend toward technology will create jobs for workers with different skills, even if overall employment drops, Beyer said.

“It opens up more opportunities for a diverse workforce,” she said. “We know we need the younger talent.”

The industry is also consolidating, with a handful of large, publicly traded companies controlling about two-thirds of the market for pressure pumping, one of the key technologies in the fracking revolution, Jeff Miller, CEO of Halliburton Corp., told analysts in a call last week.

Service companies like Halliburton supply the specialized crews and equipment that perform most of the hands-on work in the oil patch and provide the bulk of the oil field jobs. Like the rest of the industry, the companies have been under pressure to avoid over-building and to pare down their costs.

Halliburton, the second-biggest oil field service company, employed about 60,000 people in 2019 and now has about 44,000 workers, the company said. In addition to technology changes, many of the job losses were caused by cost-cutting and restructuring during the pandemic, according to a statement.

“Many of the jobs removed as a result of these changes will not return,” Tracy Josefovsky, Halliburton’s vice president of human resources, said in the statement.

About half of the rotary drilling bits that Halliburton provides are a new, intelligent design that can be steered remotely and drill the vertical, curved and horizontal sections of a well without changing equipment, Miller said.

“Today, we see a services market in North America that is almost unrecognizable from prior cycles or even a handful of years ago,” he said.

Other companies are following a similar trend. Baker Hughes, the third-biggest service company by market capitalization, dropped from 67,000 employees to about 55,000 from the 2nd quarter of 2019 to now, according to securities filings.

“The industry believes in digital, that digital can add a significant step up in efficiency,” he told analysts last week.

At the beginning of the pandemic, Schlumberger and other oil field service companies highlighted their plans to shift into building and servicing renewable energy projects. In the latest round of earnings reports, the companies appeared to shift back toward their historic focus on fossil fuels and are responding to pressure to pay dividends and buy back shares to help bolster their investors’ returns.

The Russian invasion of Ukraine pushed oil and gas prices to record highs as the international community imposed sanctions on Russian President Vladimir Putin. The oil industry has argued that the world was already underinvesting in oil production before the war broke out, meaning that it’ll take years of new drilling to provide stable supplies of oil and gas.

Correction: A previous version of this story incorrectly identified the Energy Workforce and Technology Council.