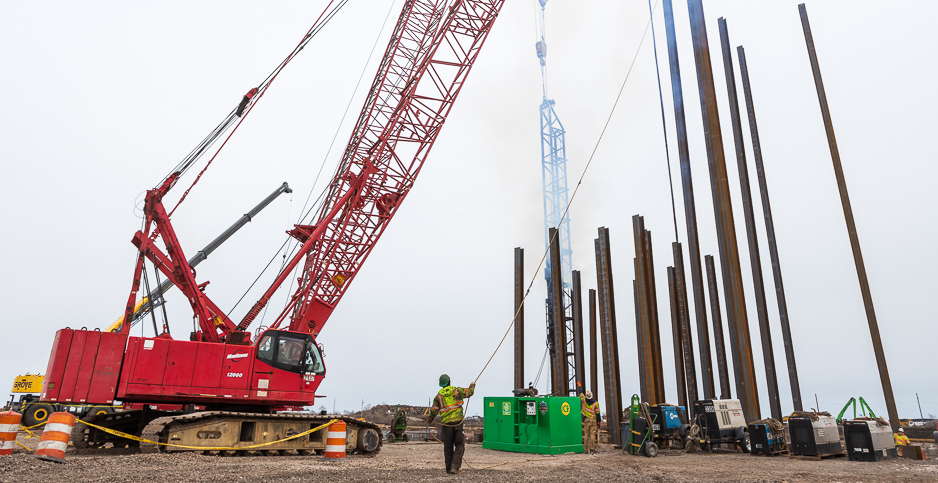 Berth construction to facilitate movement of offshore wind components is pictured at the Tradepoint Atlantic site in Baltimore in this February 2020 photo. Francis Chung/E&E News

SPARROWS POINT, Md. — A Maryland offshore energy developer is promising to build a massive steel plant outside Baltimore, creating hundreds of union jobs as it assembles one of the largest offshore wind farms on the East Coast.

U.S. Wind unveiled plans yesterday for the Sparrows Point Steel and Momentum Wind projects here at the site of the former Bethlehem Steel Corp. mill and shipyard, which produced steel for World War II Liberty ships and the Golden Gate Bridge before filing for bankruptcy in 2001 (Energywire, March 13, 2020).

The Baltimore-based company’s announcement underscores how low-carbon industries like offshore wind can intersect with industries associated with heavy emissions like steel.

It also reflects the high hopes for a clean energy industry that’s still in its infancy but has found support from both the White House and state leaders. That political spotlight has increased the pressure on developers to not only bring multibillion-dollar wind projects to the table, but also create economic engines for communities like Sparrows Point, in order to win state subsidies.

“We want to put a lot of Marylanders to work,” he said. “Developing Momentum Wind and Sparrows Point Steel at full capacity will give Maryland the opportunity to bring steel back to Baltimore and become the epicenter of offshore wind manufacturing.”

Still, the wind sector has picked up momentum in recent years as legislatures in states like Massachusetts, New York and Maryland passed aggressive clean energy standards aimed at transitioning away from fossil fuel-reliant electricity systems and generating new jobs in renewable energy.

“Offshore wind presents a once-in-a-generation opportunity,” Hogan said yesterday to a crowd gathered at the docks at Sparrows Point. “The job creation potential and associated economic benefits for the broader supply chain of offshore wind development is an absolute game changer.”

Part of the companies’ approvals was contingent on their direct investment in port upgrades at Sparrows Point so the area can serve as a staging ground for construction and maintenance of regional wind farms.

Maryland aims to get 50% of its electricity from renewable sources by 2030. Two years ago, lawmakers ordered state regulators to more than double the amount of planned offshore wind energy to help reach that goal, inspiring this recent round of bids from Ørsted and U.S. Wind.

All of U.S. Wind’s projects would rely on the proposed steel monopile fabrication facility.

“The idea is that all the foundations for our projects … will come out of Sparrows Point. Then we will hope to get other customers going forward,” he said.

The company anticipates that construction and operations of Momentum Wind will create up to 3,500 jobs. The steel facility would support up to 500 local permanent jobs, it said, and would boost Maryland’s gross domestic product by $6.9 billion over 20 years.

“We’ve proposed all of this to the state as part of our bid [for ORECs]. It is contingent on that,” Grybowski said.

Ørsted announced its own bid last month with a 760-MW project called Skipjack Wind 2. It also promised to support steel fabrication in Maryland by ensuring its preferred steel supplier subcontracts with a Maryland company. The Maryland Public Service Commission has yet to decide which developer will receive additional renewable energy credits.

A history with steel

U.S. Wind’s proposal to help revitalize Sparrows Point has garnered broad support from labor groups and local political leaders who experienced the slow decline of Bethlehem Steel, once one of the largest U.S. manufacturing plants.

“Sparrows Point has always been hallowed ground for me and my fellow Steelworkers,” said Jim Strong, assistant to the director of United Steelworkers, who attended the event yesterday. “U.S. Wind is committed to supporting thousands of family-sustaining union jobs, and we couldn’t be happier to be partnering with them on this new venture.”

The Sparrows Point steel mill was first brought online in the 1880s and at its height supported 30,000 workers, many of whom lived on the peninsula that juts into the Patapsco River in central Maryland.

But Bethlehem Steel gradually saw its business dry up alongside the country’s broader manufacturing exodus. It filed for bankruptcy in 2001 and went through various new owners in subsequent years, including one with plans to turn the site into a casino.

Developer Tradepoint Atlantic bought the mill and surrounding site in 2014, promising new jobs and economic activity for the community and the cleanup of legacy pollution.

In addition to the offshore wind zone, Tradepoint Atlantic has turned the area into a regional hub for business like Amazon.com Inc. and Under Armour Inc.

But developers say offshore wind could be the flagship industry Sparrows Point has been missing since Bethlehem Steel closed. U.S. Wind says the jobs needed to support the new steel facility alone would create $1 billion of labor income over the next 20 years.