Pelosi to Glasgow: Congress has Biden’s back on climate 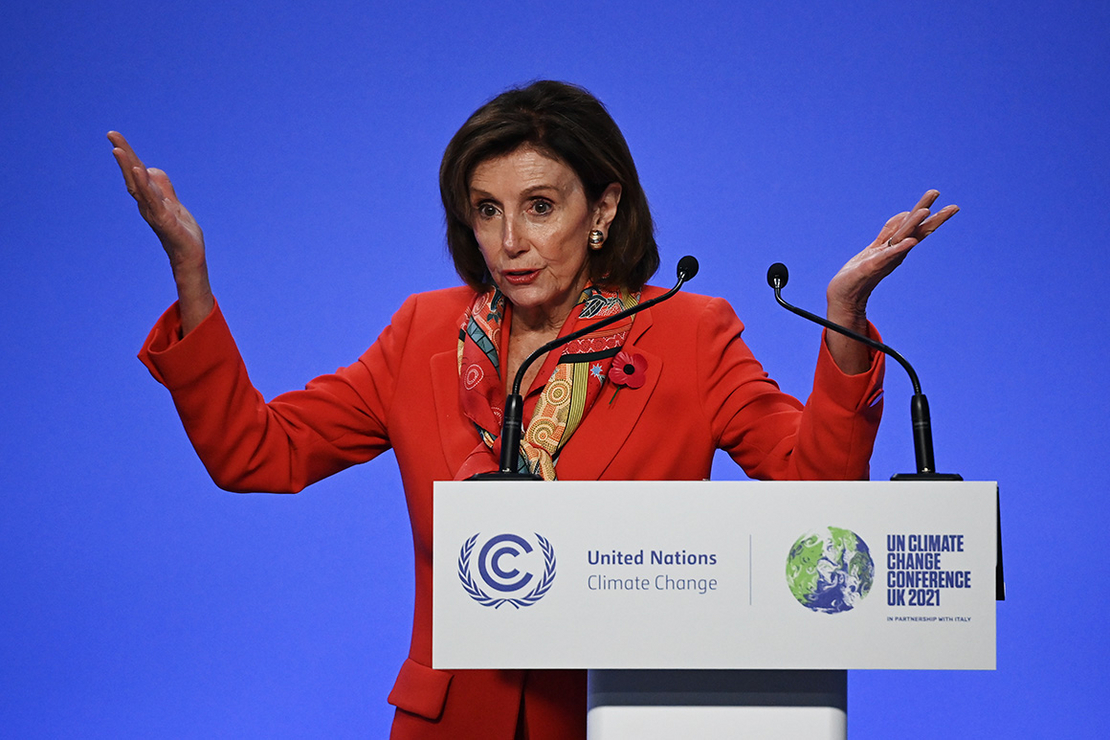 House Speaker Nancy Pelosi (D-Calif.) today sought to assure the world that Congress has President Biden’s back as she touched down in Glasgow, Scotland, for United Nations climate talks with a group of nearly two dozen House Democrats.

Pelosi and her top deputies portrayed the $1.75 trillion spending legislation moving through Congress as primarily a historic effort to meet Biden’s pledge to halve U.S. greenhouse gas emissions by 2030.

“Our congressional delegation comes here fresh from advancing legislation to build back better, which represents the most ambitious and consequential climate and clean energy legislation of all time,” Pelosi said in a news conference in Glasgow today.

The pending reconciliation package, combined with the bipartisan infrastructure bill the House finalized over the weekend, would keep the world on track to reach net zero by 2050 and, potentially, hold warming under 1.5 degrees Celsius, said House Select Committee on the Climate Crisis Chair Kathy Castor (D-Fla.).

“I think once we pass this historic package, finally, it will help the world keep 1.5 alive,” Castor said in Glasgow.

Those are bold claims that offer Biden a political crutch as the Chinese delegation to the conference, known as COP 26, questions how the U.S. would deliver on its promise to slash emissions in half in under a decade without Congress.

But while the reconciliation package — dubbed the “Build Back Better Act” — would indeed spend big on climate, to the tune of $555 billion, it’s still far from the finish line.

The House passed the separate bipartisan infrastructure bill, which contains some $500 billion in new spending and big boosts for electric vehicles and transit, on Friday, sending it to Biden’s desk to become law.

But the much larger reconciliation spending bill remains in political limbo, with House moderates holding out to see a score from the Congressional Budget Office before locking in their support.

It could also end up subject to change in the Senate, where Energy and Natural Resources Chair Joe Manchin (D-W.Va.) has raised concerns about the proposed methane fee, one of the bill’s major emissions provisions.

The CBO said today that it could offer no specific timeline for scoring the massively complex legislation, but Pelosi nonetheless reiterated that she intends to pass it when the House returns from recess next week.

Pelosi acknowledged Congress has been a hurdle for climate action in the past, a point former President Obama made during his own remarks in Glasgow yesterday (Greenwire, Nov. 8).

“When President Obama was president and we had majority in the first term of that, we did pass in the House a very strong climate bill,” Pelosi said. “Sixty votes in the Senate is an obstacle that is very hard to overcome.”

Still, Pelosi and other committee chairs painted a wholly optimistic picture from Glasgow today, stressing the billions contained in the reconciliation bill for environmental justice and equity.

The speaker brought a delegation of 21 other House Democrats to Glasgow, including committee chairs like Rep. Frank Pallone (D-N.J.), who leads Energy and Commerce, and Rep. Raúl Grijalva (D-Ariz.), who chairs Natural Resources.

Other Democrats have also offered words of caution. Before setting off for COP 26, Grijalva blasted the conference’s lack of Indigenous representation.

“The United Nations are, in some ways, repeating the same tragic mistakes that created the climate crisis to begin with,” Grijalva said in a statement yesterday. “Climate change is the direct result of industrialized nations exploiting our world’s natural resources and violently stealing land from Indigenous and poor peoples."

Meanwhile, Rep. Alexandria Ocasio-Cortez (D-N.Y.) — another prominent member of Pelosi’s COP 26 delegation — warned U.S. officials not to go too far in claiming plaudits for their climate goals before actually doing anything.

Democrats have to “deliver the action in order to get the respect and authority internationally,” Ocasio-Cortez said during a separate event today on the sidelines of COP 26. If Congress passes the “Build Back Better Act,” she added, “there still is more to be done,” from executive actions to further climate legislation.

“We have to draw down emissions to get credit for being committed on climate change,” Ocasio-Cortez said. “It’s really that simple.”