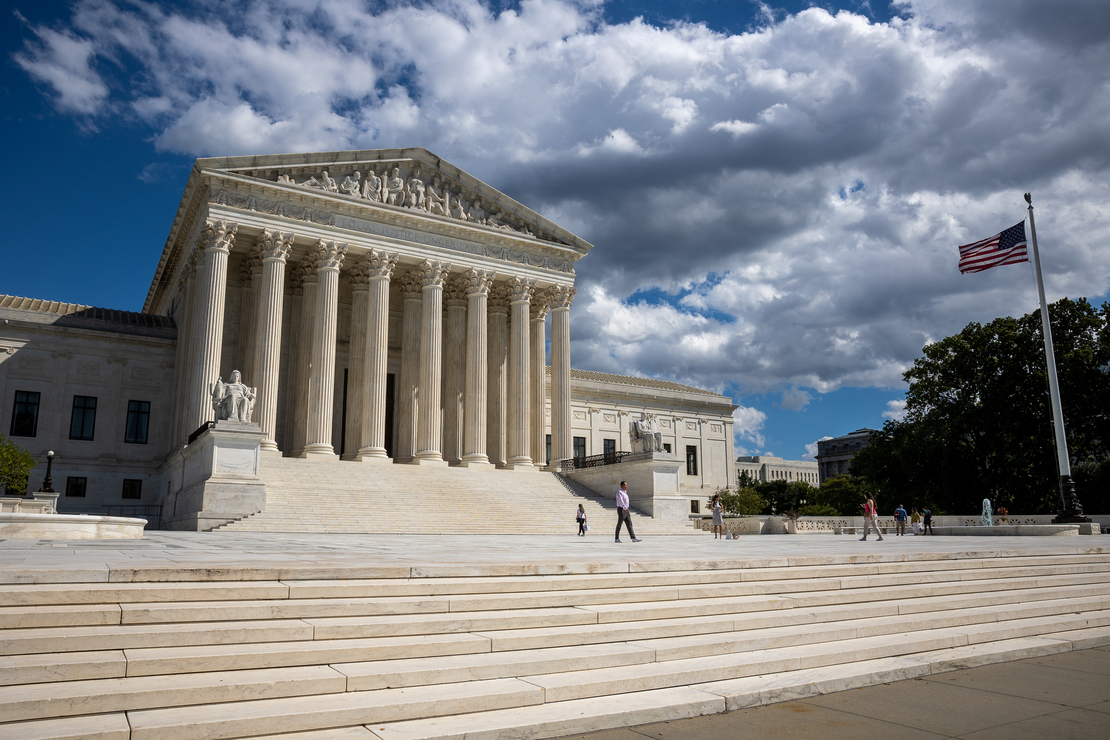 Jackson’s ascent is monumental in that she is the first Black woman to be a Supreme Court justice. But her addition to the diminished three-justice liberal wing won’t dilute the power of a conservative majority that has signaled interest in scaling back the federal government’s ability to act on health emergencies, climate change and other key issues.

“One of the things we’re looking at here is a court that’s increasingly skeptical of broad delegations of authority to agencies,” said Emily Hammond, a law professor at George Washington University during a recent panel discussion hosted by the school. “The purpose of those broad delegations was to enable the agencies to confront the most pressing challenges of our time.”

The Clean Water Act case — Sackett v. EPA — has the potential to limit safeguards for the nation’s wetlands and is one of many battles that court watchers largely agree would not have been granted before the Supreme Court’s conservative majority grew from five justices to six.

Legal observers are seeing “a shift, a really concerted effort among parties to take advantage of the changes on the court,” said Hammond.

They added: “Here that takes place with the regulatory state.”

In Sackett, Idaho landowners have asked the justices to instruct a lower court to apply a more restrictive definition of waters of the United States, or WOTUS, that they say would exempt their land from costly federal permitting requirements.

Attorneys for Michael and Chantell Sackett argue that the courts should apply the more limited definition articulated by the late Justice Antonin Scalia in his plurality opinion in the 2006 case Rapanos v. United States, which divided the court 4-1-4.

Since Rapanos, federal courts — including those that have examined the Sacketts’ property — have generally applied the more expansive “significant nexus” test laid out in former Justice Anthony Kennedy’s concurring opinion in the 2006 case.

The Sackett wetland is particularly interesting because it has been considered jurisdictional under many definitions of WOTUS, said Ann Navaro, a partner at the firm Bracewell LLP.

The decision by the justices to take up the case is “giving some folks reason to believe the Supreme Court may be ready to make a move to change the way the Clean Water Act has been interpreted,” she said.

Many legal observers say they were surprised that the court granted the Sackett case at all instead of disposing of it, which the justices do with most petitions.

The Biden administration had urged the justices to reject Sackett until EPA and the Army Corps of Engineers had time to craft a brand-new WOTUS rule. A lower court struck down the last iteration of the regulation, which was penned by Trump administration officials and aligned with Scalia’s Rapanos test.

The administration made a similar argument before the justices granted last term’s most significant environmental case, West Virginia v. EPA. In the court’s June 30 ruling in the case, the six conservative justices faulted EPA for exceeding its authority in an Obama-era power plant emissions rule that did not technically still exist — and that the Biden administration had been in the process of rewriting.

Traditionally, federal courts wait for rules to be finalized before they review them.

In West Virginia, the justices applied the “major questions” doctrine to find that EPA under former President Barack Obama, without explicit authorization from Congress, had overstepped in crafting a rule that required power plants to shift from coal to renewable energy sources.

There’s nothing stopping the Supreme Court from using the same doctrine in Sackett — or in any other cases where the justices would like to rein in the federal government, said Hammond.

“It prompts all kinds of opportunistic arguing in the briefing to see what will stick,” Hammond said.

Here are some other upcoming cases that could shape the future of environmental regulation and federal power.

A high court battle over a California animal welfare law could affect states’ ability to make their own climate and energy rules.

Pork producers and farmers contend that California — which consumes about 13 percent of the nation’s pork but produces only about 1 percent of it — posed an excessive burden to interstate commerce when it banned the sale of meat from pigs born to sows that did not have space in their pens to stand up or turn around.

The Biden administration has sided with pork producers’ argument that California’s law should be prohibited under the dormant commerce clause, which forbids discrimination against interstate trade — but distinguished the measure from state efforts to curb pollution within their borders.

The 5th U.S. Circuit Court of Appeals ruled that although Hewitt earned more than a federal threshold for overtime payments, he could receive overtime pay because his compensation was set on a daily, instead of a weekly, basis.

Helix said a ruling from the Supreme Court could resolve disagreement between federal appeals courts on how to apply a U.S. overtime law.

In one of the highest profile cases of the term, the justices will consider whether the consideration of race in admissions decisions at the University of North Carolina and Harvard University violates the Constitution.

Legal observers widely expect the court to rule in favor of the challengers, which could have a big impact for the Biden administration’s efforts to address disproportionate pollution in minority communities.

At least one of those initiatives — a Department of Agriculture debt relief program for Black farmers — has already faced backlash in the courts.

A dispute over the jurisdiction of a federal court in an ongoing administrative proceeding before the Securities and Exchange Commission could ultimately hobble the power of federal agencies’ ability to enforce their own rules outside of the courts.

The case involves Michelle Cochran, a certified public accountant who had worked for a small auditing firm. Three years after Cochran left the firm after alleged unprofessional behavior by her boss, the SEC filed an order against the company, Cochran and another accountant, claiming that they had violated auditing documentation requirements under federal law.

Montana landowners living along an easement near the Bitterroot National Forest are calling on the Supreme Court to help them pursue their challenge against the Forest Service for changing the terms of public access to the road.

As a result of that change, the landowners — Larry “Wil” Wilkins and Jane Stanton — say their property has been overrun by trespassers, one of whom shot Wilkins’ cat.

The Forest Service says Wilkins and Stanton missed the statutory deadline for their lawsuit.

Over the coming months, the court will continue to add cases to its calendar. The justices will select those cases from the thousands of petitions that are filed each term.

It takes the vote of four justices to grant a case, and each petition has about a 1 percent chance of being accepted by the court.

Here are some of the other environmental battles the justices could choose to take up.

The justices could agree to hear a case that examines whether the government is legally obligated to assess and address the water needs of the Navajo Nation, a federally recognized tribe along the Colorado River. A lower court sided with the Navajo Nation, holding that even though no treaty explicitly specifies the tribe’s Colorado River rights, the government still has a duty to protect and preserve the Nation’s as-yet-unquantified right to water.

The petition arises amid ongoing conversations between the Biden administration and seven Western states on how to address the drought and stabilize the river system.

Former coal executive Don Blankenship is once again calling on the Supreme Court to help overturn his 2015 conviction that resulted in a yearlong prison sentence and $250,000 fine for safety violations related to the deadly 2010 Upper Big Branch mine explosion.

The petition from the former Massey Energy CEO focuses on the legal burden a defendant must meet to show that the Justice Department failed to produce all documents related to a trial.

The Supreme Court previously declined a request from Blankenship to review the federal government’s handling of his case.

Virginia landowners in the path of the Mountain Valley pipeline are pursuing a sweeping challenge to the Federal Energy Regulatory Commission’s delegation of eminent domain power to companies building natural gas pipelines.

The question before the justices is whether their challenge to the constitutionality of the Natural Gas Act provision delegating the authority to condemn land to developers of certified projects, was appropriately raised in district court.

A ruling in favor of the landowners would allow them to continue pursuing their legal challenge against FERC.

The Supreme Court could choose to get involved once again in a fight launched by oil and gas companies to quash nearly two dozen lawsuits from U.S. municipalities seeking compensation for the effects of global warming.

Suncor Energy has asked the justices to review its bid to move the climate liability lawsuits to federal court, where companies believe they are more likely to prevail.

The Supreme Court previously declined to consider the broader argument of whether federal courts should have sole jurisdiction in climate litigation but sided with the oil industry’s narrower argument in the 2021 case BP PLC v. Mayor and City Council of Baltimore. The justices agreed that federal appeals courts should review the entire scope of the oil industry’s arguments for bumping cases to federal judges.

Since that ruling, however, appellate judges have still agreed with state and local challengers that the cases belong in the state courts where they were originally filed.

Suncor says this time around, the Supreme Court can resolve the question of “whether state courts have the power to impose the costs of global climate change on the energy industry.”

The request illustrates the theme that has emerged under the Supreme Court’s new conservative supermajority, said Robert Percival, director of the environmental law program at the University of Maryland.

“A radically activist conservative court attracts increasingly extreme positions by litigants,” he said. “Sackett now has become nothing less than an invitation to radically rewrite the Clean Water Act in a way that none of the justices in Rapanos would have entertained.

“The Suncor cert petition,” Percival continued, “now invites the court to do what it declined to do two years ago in the Baltimore case and use federal common law to magically wipe out all state law climate litigation.”