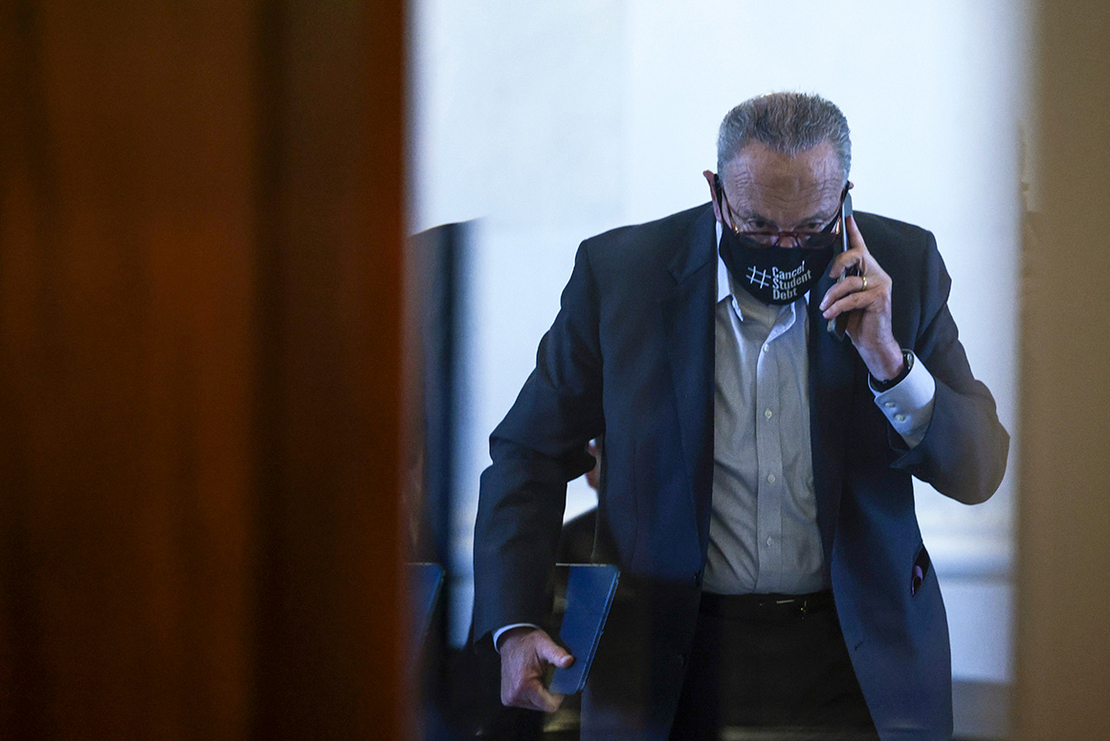 The Senate is on the precipice of striking a deal to avert an unprecedented government default later this month, but even if such a deal is struck, it sets up another high-stakes fight in December over fiscal and spending priorities.

While details remained sketchy, the proposed Senate agreement, which surfaced after weeks of partisan discord, would raise or suspend the nation’s debt ceiling into December. It could be voted on in the Senate as soon as today.

Just after midnight Thursday, Senate Majority leader Chuck Schumer (D-N.Y.) announced that talks were continuing but that a final deal had not yet been reached. “We’re making good progress," he said from the Senate floor. "We’re not there yet. But I hope we can come to an agreement tomorrow morning.”

Earlier yesterday, Democrats seemed amenable to a deal proposed by Senate Minority Leader Mitch McConnell (R-Ky.) that would avert a default by either approving a short-term debt limit hike or speeding up budget reconciliation procedures.

“It would have been a disaster if this did not happen, and I’m glad that Mitch McConnell finally conceded the point that we have to pay our debts incurred under Trump," Senate Budget Chair Bernie Sanders (I-Vt.) told reporters yesterday.

The potential accord comes as the Senate was preparing to vote on a House-backed bill that would have suspended the nation’s debt limit through December 2022. Senate Republicans had signaled they would block the bill as part of an effort to force Democrats to address it via their pending reconciliation package.

Shortly before the vote, McConnell pulled back that demand and instead proposed the two-month extension, an acknowledgment that he could not force Democrats’ hand.

“The unified Democratic government had 2 ½ months to address the debt limit through reconciliation. Instead, they drifted to the doorstep of yet another self-created Democrat crisis,” said McConnell, arguing the GOP was offering a way out of a market-rattling debt default.

While the tentative agreement could avert a default as soon as Oct. 15, it sets up a potentially even more thorny, year-end negotiation over the debt ceiling and fiscal 2022 spending. Current stopgap spending expires on Dec. 3, and without a new plan in place, much of government would be forced to shut down.

Senate Democrats, however, showed little worry yesterday about the looming December deadlines and stressed the debt extension would give them time to complete work toward agreement on the reconciliation package and pass the bipartisan infrastructure bill.

House Speaker Nancy Pelosi (D-Calif.) has imposed a deadline of Oct. 31 on those matters. Indeed, Democrats viewed the offer from McConnell as a major win in that the GOP dropped its demand that Democrats go it alone on raising the debt.

“If we can move it to December, it gives us more time to get Build Back Better and get the president’s agenda done,” said Sen. Debbie Stabenow (D-Mich.), referring to the reconciliation package. She cited addressing climate change as among those priorities she expects to be addressed by the reconciliation bill.

For weeks Democrats had argued against adding a debt provision to a partisan reconciliation plan, saying both parties should be responsible for paying the nation’s bills. They also feared the GOP would use it as a political cudgel in next year’s elections to blame Democrats for soaring federal red ink.

But Sen. Chris Murphy (D-Conn.) conceded lawmakers were only getting a short-term reprieve. “We are all beside ourselves that the only thing Republicans are willing to do is prevent disaster for three months and put us right back in this position,” Murphy said.

The punt on the debt limit could set up two deadlines in December: one to avert a default and another to sidestep a government shutdown when spending runs out Dec. 3. Such a scenario could potentially give the GOP more leverage in year-end spending talks with a Democratic president and Democratic House and Senate that otherwise might find little reason to negotiate with Republicans.

In 2011, McConnell and then-Vice President Biden negotiated budget legislation around a debt and spending deadline that ultimately, paved the way for 10 years of budget restraints enforced by an unpopular sequester. Such an outcome seems less likely this year than a decade ago, when the GOP controlled Capitol Hill and was able to bargain with a Democratic White House.

“It’d probably be wise,” said Sen. Richard Shelby (R-Ala.), the Senate’s top appropriator, when asked about possibly negotiating new spending restraints. But, he added, he was doubtful Democrats would agree to any funding limits as they “seek to create a new order in America.”

Sen. Kevin Cramer (R-N.D.), a Budget Committee member, demurred last night about linking the debt limit to spending. “I don’t think it was intended to correspond … but maybe? What a coincidence!”