Red New Deal? GOP offers a climate plan of its own 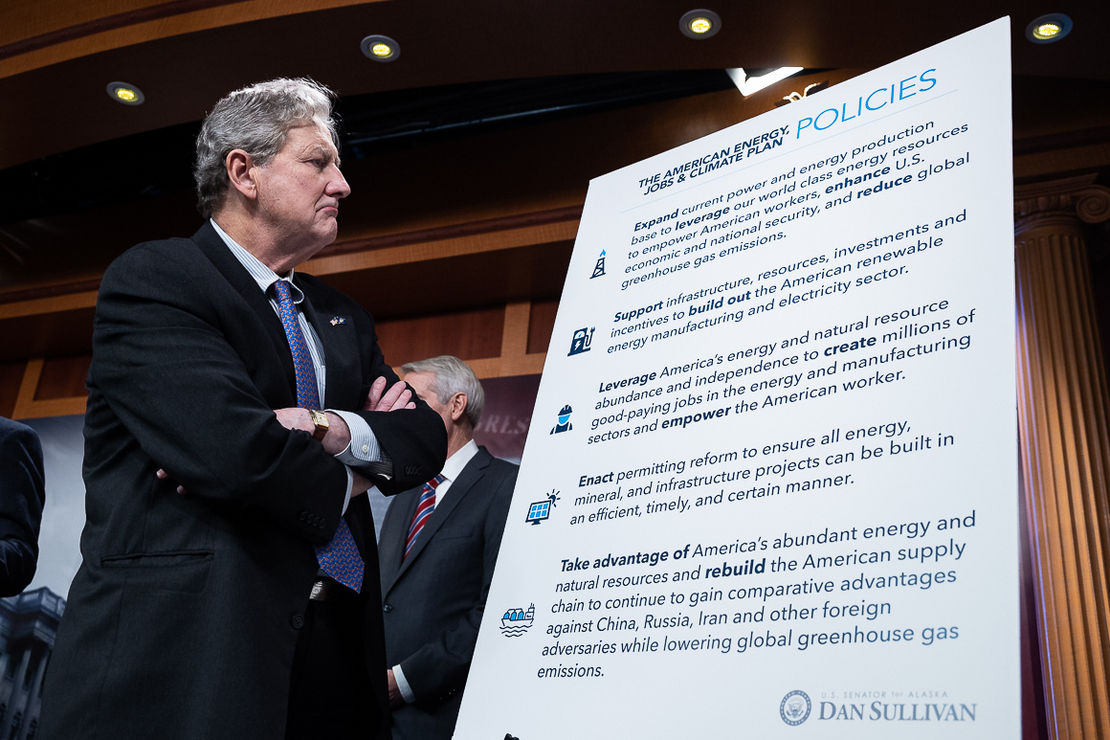 Sen. John Kennedy (R-La.) reading a board yesterday with details of a GOP energy and climate plan. Francis Chung/E&E News

“We have an opportunity with our allies and with our technologies, I think, to set a different goal than simply let’s get America to zero, let’s unilaterally disarm the American economy by just getting to zero and then let China do what they do,” Sen. Kevin Cramer (R-N.D.) told reporters.

Still, the announcement was notable. It’s the first time Republicans have articulated a specific greenhouse gas reduction target for 2050, and it offered the GOP another opportunity to blast high gas prices, climate envoy John Kerry’s private jet and the Green New Deal.

But it’s not a goal that would avoid the worst impacts of climate change. A net-zero pathway, which scientists say is crucial to hold temperature rises under 2 degrees Celsius and avoid devastating environmental and economic impacts, would necessitate energy and industrial carbon emissions falling 40 percent by 2030, according to the International Energy Agency. It would also require a 75 percent reduction in emissions of methane — a byproduct of natural gas.

Republicans, however, stressed that they’re not setting a global temperature target. They instead set themselves in opposition to President Biden’s goal of reducing U.S. emissions 50 to 52 percent under 2005 levels by 2030.

“The United States is leading the world in terms of the reduction of global greenhouse gas emissions, but what we don’t want to do, like the Green New Deal, is a top-down approach,” Sullivan said.

It’s not the first time the GOP has tried to put together ideas about climate change. The party has been trying to move away from outright denial for years now, despite former President Trump’s repeated claims that climate change is a “hoax.” Instead, many are emphasizing energy innovation and the role of natural gas in reducing emissions.

In short, Republicans say that policy should focus on reducing greenhouse gas emissions, not on the fossil fuels that produce them.

“In the 1970s, they said it was going to be a new cooling period. But now it gets warmer, it gets colder,” Scalise said, rehashing a well-worn talking point used by climate change deniers. “That’s called Mother Nature.”

Even as Republicans stressed the importance of climate change as an issue at yesterday’s news conference, they made some statements that were, at best, inconsistent with the scientific consensus.

Global temperature rises since the beginning of the 20th century are primarily due to human activity, namely the burning of fossil fuels, according to U.S. government agencies, the U.N. Intergovernmental Panel on Climate Change and virtually every climate scientist.

Sen. John Kennedy (R-La.), meanwhile, said climate change should be viewed as a “discrete scientific problem” and referred to Biden and Kerry as “Trotsky-like wokers.”

“They see climate change as a religion, and you can’t talk about it unless you follow their dogma,” Kennedy said.

The GOP plan is backed by a variety of right-leaning climate groups, the Laborers’ International Union of North America and the U.S. Chamber of Commerce.

It doesn’t offer specific policy proposals, but it does say that the GOP is against “mandates, regulations, and taxes” and “viewing policies through the myopic lens of only reducing U.S. emissions.”

In the past, Republicans have been hesitant to set any specific target, even as they have talked up their support for climate science, and Cramer acknowledged it’s “unusual” that the GOP would lay out an emissions goal.

“I think there’s a growing realization by politicians of all stripes that it’s an issue that Americans want us to deal with,” Cramer said.

But, Cramer said, that doesn’t mean Republicans are ready to assign blame for the problem.

“I’ve always said it’s not an either-or — you’re not either a denier or worshiper. There are a whole bunch of people in between that understand that the climate is changing but don’t know whose fault it is and who’s responsible for how much,” Cramer said. “Doesn’t matter. The American people want us to deal with it.”