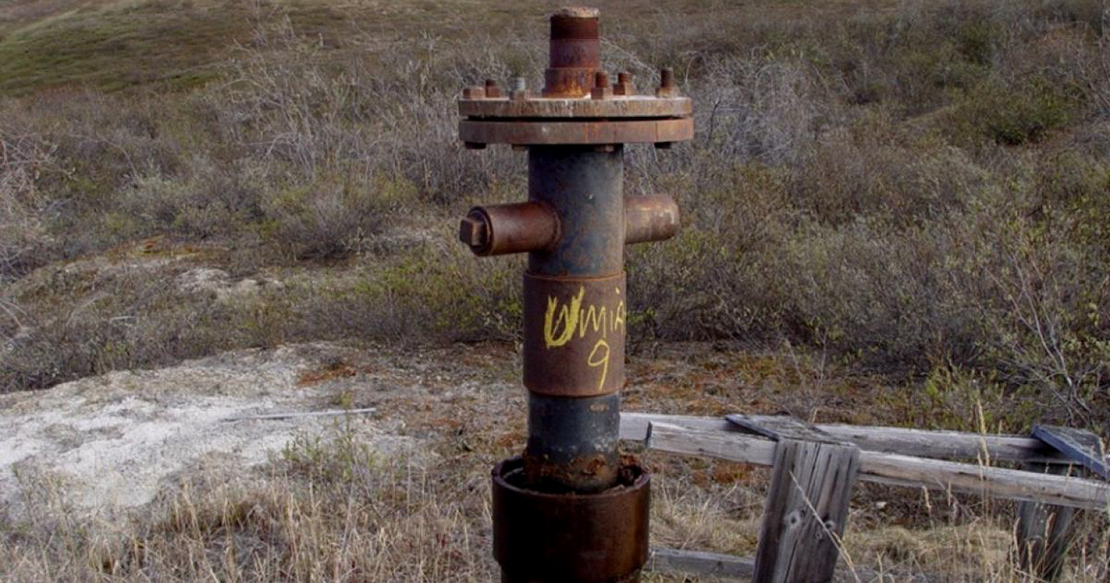 The $4.6 billion in the infrastructure package to plug abandoned oil and gas wells is resurfacing questions about whether some states have the staff and infrastructure to handle the cash or will let the funds go to waste.

The plan has bipartisan support, since it will help create jobs for oil field workers laid off during the pandemic and aims to reduce methane pollution, a potent greenhouse gas.

But the funding for abandoned wells, which is being overseen by the Department of the Interior, will come with the kind of federal oversight that states frequently lobby against.

It also throws a spotlight on state-level oil and gas agencies that are underfunded and understaffed in many cases and that often come under the political sway of the oil industry. Critics of state oversight of oil well cleanup say they have often made the problem worse. Some environmentalists also have protested the idea of using public money to clean up the oil industry’s pollution.

The Interior Department says it will be watching the use of funds closely. The issue came to the forefront this month at the Interstate Oil and Gas Compact Commission (IOGCC) conference of state energy officials in Santa Fe, N.M., where Steve Tryon, who oversees the grants at the Interior Department’s office of environmental compliance, alluded to a case that dogged the Obama administration’s efforts to promote clean energy.

“We have a fiduciary responsibility to not have misuse of the funds. How many of you remember Solyndra?” he said, referring to a company supported by the federal stimulus package a decade ago that later went bankrupt.

In the oil field, orphans are old wells that have been abandoned by their previous operators. If they are left unplugged, they can pollute groundwater and leak contaminants and natural gas — which is mostly methane. Methane traps more heat in the atmosphere than carbon dioxide. The Biden administration released rules this month aiming to reduce emissions of the gas (Energywire, Nov. 3).

Most of the money in the infrastructure package — $4.3 billion — will be distributed to state agencies as grants for oil well cleanup. To qualify, states will have to perform an environmental assessment under the National Environmental Policy Act (NEPA), according to Tryon.

States also will have to report their results to the federal government, which in turn answers to Congress and the White House, Tryon said.

Many state energy officials at the conference, who hailed across the political spectrum from California to Texas, approved of the idea.

Ken Wagner, a former Trump EPA official who is now Oklahoma’s energy and environment secretary, said in an interview he’s almost certain his state will accept the money.

“They’re giving us money, that money comes with conditions,” Wagner said. “We see the environmental good that comes with it.”

Those comments, however, came hours after Oklahoma Gov. Kevin Stitt (R) gave a speech opposing the Biden administration’s energy policy and saying states need to defend their freedom from the federal government.

A problem from Pennsylvania to Arizona

EPA estimates there are as many as 3 million orphaned or abandoned wells in the country. State officials have been largely responsible for policing them, but most states don’t have the funding to plug them (Energywire, May 20, 2019).

Sealing an old oil well typically requires a specialized crew to remove the old equipment and pump cement into the bore. The cost can range from a few thousand dollars for shallow wells up to millions of dollars for complicated projects such as offshore wells.

The most active states, like Texas, are only treading water. Texas plugged more than 1,400 wells in its most recent fiscal year, but it still had more than 6,000 orphans at the end of the year because companies abandoned more wells.

Other states are hampered by long-standing staffing and funding problems.

Pennsylvania, the second-biggest gas-producing state, has hundreds of thousands of orphans dating to the 1860s. The state Department of Environmental Protection pays for its oil and gas program with fees on new drilling permits, and it’s facing a budget shortfall because new applications are about a third of what the state planned for, Deputy DEP Secretary Scott Perry said during a roundtable discussion.

New Mexico, the second biggest oil producer, has a 73-person staff to handle permit-writing and oversight of tens of thousands of wells, according to a presentation at the conference. Until recently, New Mexico’s Oil Conservation Division was prohibited from imposing fines for oil field pollution (Energywire, Jan. 17, 2020).

Arizona, which has only a trickle of oil production, recently discovered that it has about 1,100 abandoned oil wells, and it’s trying to determine if they’re truly orphaned, according to another presentation.

The idea of using federal aid to solve the problem came up shortly after the onset of the COVID-19 pandemic. The resulting recession put the oil industry into a tailspin and led to tens of thousands of layoffs.

The IOGCC, which serves as a clearinghouse for the state energy regulators, pushed Congress to include well-plugging funds in the first round of federal relief, known as the CARES Act.

That didn’t happen, but a handful of states used their share of CARES funds to plug wells in 2020, including North Dakota and Wyoming (Greenwire, Nov. 13, 2020).

‘The problem will only grow’

Micah Chambers, Cramer’s legislative director, said at the conference that the package emphasizes speedy results. Instead of waiting months for Interior to write rules and create definitions for orphan wells, the statute relies on existing state programs.

The law spells out a role for the IOGCC, since it has already spent years compiling information about orphan wells in its member states.

That idea is drawing some opposition, though, in part because the oil industry has a lot of influence at the state level.

In Texas, the energy regulators at the state Railroad Commission are elected directly. In North Dakota, the governor chairs the state Industrial Commission. Both states allow unlimited campaign contributions, even from companies that have business before the regulators (Energywire, Aug. 13, 2018).

The IOGCC also has been criticized for parroting the industry’s talking points on some issues. The conference in Santa Fe was partly funded with donations from Chevron Corp. and other oil companies (Greenwire, Dec. 9, 2011).

Lori Wrotenbery, the IOGCC’s executive director, said the oil industry doesn’t control the group’s actions. The commission’s members, which include dozens of states and a handful of Canadian provinces, set the group’s agenda, she said in an email.

While the influx of money may create headaches, the states have a history of working with the federal government, Wrotenbery said. And, she added, some of the reporting compliance requirements may not apply if the funds are used to plug wells on state and private land.

"The magnitude of this funding opportunity presents a huge challenge, and nobody is better prepared than the states to meet this challenge," she wrote.

The states themselves have created part of the orphan well crisis because of lax oversight, according to some critics. Most states require companies to post a bond before drilling a well, but the bonds generally aren’t enough to cover the cost of plugging wells. Some states also have allowed wells to sit idle for years, or to be sold to operators who aren’t financially sound enough to cover the cost of shutting them down.

California, North Dakota and a handful of states have reformed their bonding practices in recent years. Colorado is holding hearings on its bond practices this month.

“Without appropriate bonding incentives, taxpayers may be forced to pay billions in cleanup costs,” the nonprofit Carbon Tracker Initiative said in a July report.

This month, a group of landowners in North Dakota analyzed the state’s use of CARES Act funds for well plugging and found that the state underestimated the costs and spent some of the money to plug wells belonging to companies that were still solvent.

Unless the state reforms its regulatory system for aging oil wells, “the problem will only grow,” the Northwest Landowners Association said in a letter.

Lynn Helms, the head of North Dakota’s energy agency, acknowledged that some of the funds went to companies that ultimately survived the downturn. But the companies were in dire financial straits when they applied to the state for plugging funds, he said.

‘Tone deaf and a waste of money’

The timeline for spending the new federal funds has now started since the president signed the bill into law this month.

The first round of funding will be $775 million for initial grants that will go to state agencies a few months after the bill is signed, Tryon, the DOI official, said. Those grants will come in two phases — $5 million to help states develop their well-plugging programs and $25 million to be spent directly on the work.

Another $2 billion will go to formula grants based on the number of orphan wells in each state and the job losses the state experiences. A third round of funds, $1.5 billion, will be performance grants for states that improve their plugging programs.

The NEPA reviews are just one of the requirements that the law and the DOI is attaching to the funding. An environmental assessment is less intensive than a full-blown environmental impact statement, and should take a couple of months, Tryon said.

The states will also have to provide an estimate of the number of orphan wells in their jurisdictions in order to receive the first round of grant funding.

Some states, like Oklahoma and New Mexico, have been updating their inventories in anticipation of the federal funding, but others are still looking. Ohio and New York, for instance, are using drones equipped with magnetometers to search for abandoned wells.

The states will also have to provide detailed statistics to the Interior Department, including the number of wells they plug, the cost for each well, the number of jobs created and the amount of methane reduction for each plugging job. That could be a challenge since most states don’t currently measure methane emissions before they plug a well.

The states will be in a spotlight, Chambers, from Cramer’s office, said.

“Implementation of this is going to be key,” he said. “If we don’t have marked progress, it’s going to come off as tone deaf — tone deaf and a waste of money.”

The states can use 10 percent of the funds for administrative expense. That will allow them to staff up and create the organization capacity to oversee the federal funds, Adrienne Sandoval, director of New Mexico’s Oil Conservation Division, said in an interview.

New Mexico already has experience overseeing federal grants, and the Interior Department’s reporting requirements won’t be a problem, she said.

“It’s information we need anyway — we want to know how much it costs,” Sandoval said.

The funding will only cover a relatively small number of orphan wells — the 81,000 “documented” wells that the states have already identified, not the millions of orphans that EPA has estimated exist.

Still, it’s a down payment on addressing a long-standing problem, according to the Environmental Defense Fund, which was in favor of the infrastructure bill.

Adam Peltz, a senior attorney for EDF who tracks state oil and gas issues, said the structure of the federal grants could encourage the states to reform their systems and hire more staff.

“They’ve got to hire more inspectors,” he said.

Helms, from North Dakota, said some states may opt to take the small initial grants and then apply for funding once they’ve established a plugging program. The three biggest oil-producing states — Texas, New Mexico and North Dakota — will likely be ready to spend the larger grants immediately.

Is nuclear energy poised for an ESG-fueled comeback?

Texas wants oversight of CO2 wells. Other states may follow.