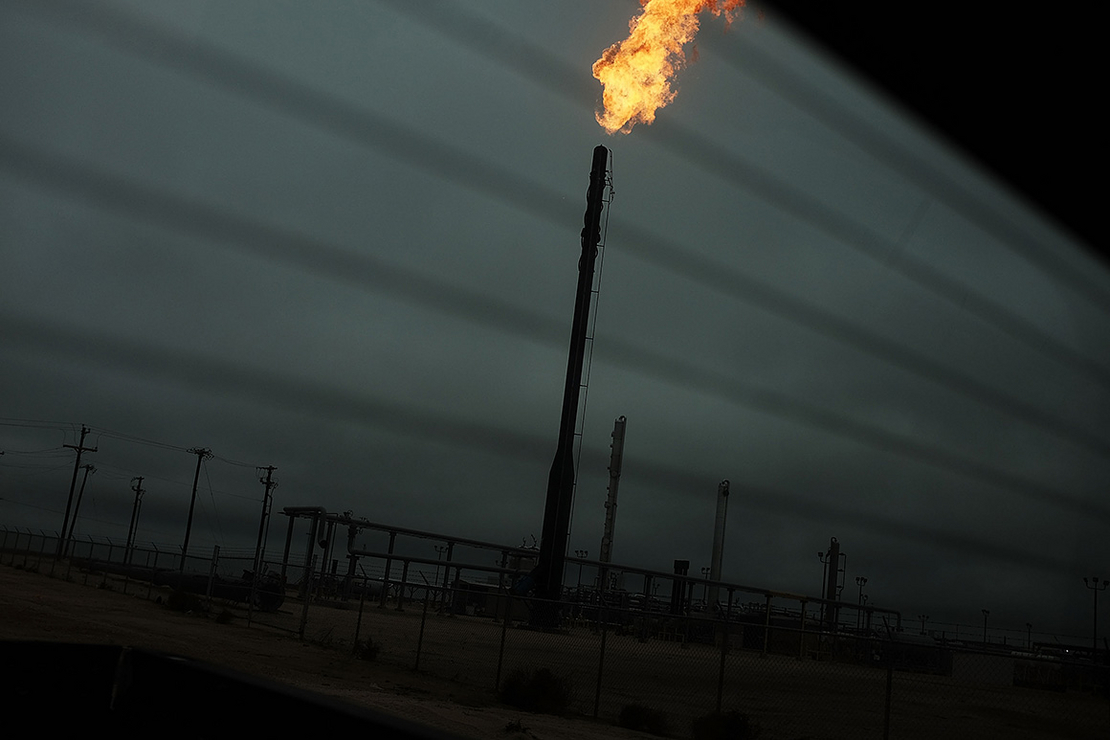 Flared natural gas is burned off at a natural gas plant in the Permian Basin on Feb. 5, 2015, in Garden City, Texas. Spencer Platt/Getty Images

Before EPA and the energy industry can address climate-warming methane emissions from oil and gas production, they’ll have to improve how they track and estimate it.

That’s according to a recent study that highlights problems with EPA’s data-collection methods and other research showing that major oil companies and some state regulators are underestimating oil field methane emissions.

The evaluations come at a critical time. EPA is preparing to announce tighter regulations on greenhouse gases from the oil and gas industry, and the U.N. Intergovernmental Panel on Climate Change has said addressing short-term pollutants like methane is crucial to limiting the rise in worldwide temperatures (Climatewire, Aug. 10).

"For a long time, in both U.S. and international climate policy-making, it could be said that CO2 sucked all the oxygen from the room,” David Doniger, director of the climate and clean energy program at the Natural Resources Defense Council, wrote in a blog post yesterday. "But that’s now changing, as scientists, advocates, and government officials recognize the need to curb multiple pollutants — CO2, methane, and other potent short-lived climate pollutants like HFCs — at the same time."

EPA’s method of calculating methane pollution has been widely criticized for underestimating emissions from the oil and gas industry, one of the biggest sources of the potent greenhouse gas (Energywire, Jan. 30, 2020).

Today, the agency calculates its inventory of methane emissions by multiplying the number of potentially leaky components — such as valves and thief hatches on well heads and storage tanks — with an estimate of the average emission rate for each part.

Some groups have said that such a “bottom-up” approach — where a national estimate of emissions is built by scaling up measurements taken at a small sample size of wells or facilities — leads to an underestimation of emissions. They’ve cited the potential to miss so-called super emitters, or a small number of sources that contribute a large percentage of overall emissions.

Studies with a “top-down” approach — using satellites or aircraft to determine total emissions from multiple sites — have found total methane emissions that were double EPA’s estimates.

A study published this month in Nature Communications investigates the gap between “top-down” and “bottom-up” approaches.

Researchers from Stanford University, the Harrisburg University of Science and Technology, and other institutions say EPA’s “detailed, engineering-based” approach works — but it’s relying on faulty data.

EPA is still using equipment counts based on industry self-reporting and a decades-old study, said Arvind Ravikumar, a research associate professor at the University of Texas at Austin and study co-author. While the number of some components hasn’t changed, others have, especially because of the surge in shale drilling in the 2010s.

“When the fracking revolution happened, the type of equipment at oil and gas facilities changed,” Ravikumar said. That means today’s equipment could have a different number of components like valves or connectors.

The Stanford researchers focused on the bottom-up approach because it’s the method used by EPA when it writes regulations, and it’s widely used by other governments. They examined "component-level measurement data" drawn from previous studies and concluded EPA’s current estimates underreport emissions caused by liquid storage tanks.

The liquids frequently have methane and other gases dissolved in them, which can be released during normal operations or when hatches and valves are inadvertently left open.

“It’s like opening a beer,” Jeff Rutherford, one of the paper’s authors, said in a news release. “It’s liquid as long as there is high enough pressure, but if you release the pressure, the gas quickly escapes.”

A spokesperson for EPA said the agency looks forward to reviewing the findings.

As the agency prepares its Inventory of U.S. Greenhouse Gas Emissions and Sinks, it assesses new studies for data that could inform updates to the annual report (Energywire, March 30).

Ravikumar said he hopes state governments and EPA use the study results to improve their methane estimates.

“It is helpful simply to identify that there is a problem,” Rutherford said in the news release. “But, beyond that, our model offers up some clear actionable steps to improve our inventories and ways operators can adjust their practices that could really make a difference in reducing the amount of methane entering the skies."

“What we find is that if you use more modern data and slightly modified approaches … that the EPA approach can be used to produce an accurate inventory estimate,” Rutherford added in an interview.

Other research shows oil producers that plan to cut their emissions still have problems with methane.

Royal Dutch Shell PLC, which has pledged to reduce its greenhouse gas emissions to the equivalent of zero by 2050, had the highest methane intensity among the 15 biggest oil companies, according to data compiled by Geofinancial Analytics and first reported Saturday by Reuters.

The oil companies questioned Geofinancial’s interpretation of the satellite data, saying it may attribute emissions to their wells that were produced by pipelines or other third parties.

“Over time, their models and analysis have the potential to improve as additional information becomes available to them,” a Chevron spokesman told Reuters.

In a separate report published yesterday, researchers with environmental group Earthworks said that more than two-thirds of the gas flares in part of Texas’ Permian Basin have not been permitted by state regulators. The flares are typically installed at oil wells to burn methane and other gases that would otherwise leak to the atmosphere.

Earthworks focused on 227 flares in Reeves County, in the southern part of the Permian Basin near the New Mexico border, and compared them to state permit records. The analysis found that 69% to 84% of the flares didn’t have the required paperwork from the Texas Railroad Commission, the state’s oil regulator. Some of the sites belong to top producers like Shell and Exxon.

“What the commission fails to track, it can’t govern,” the report says.

Industry trade groups and oil and gas companies widely condemned the Earthworks report as misleading and repeatedly noted that some flaring is permissible under a commission rule.

“A short-term observation of a flare from a flyover and absence of an explicit exception does not necessarily mean the observed flaring is illegal,” a spokesman for the Railroad Commission said in an email.

However, the commission — along with oil companies mentioned in the report — didn’t respond when asked for more details about how the unpermitted flares complied with the rules.