Search for environmental deputies heats up 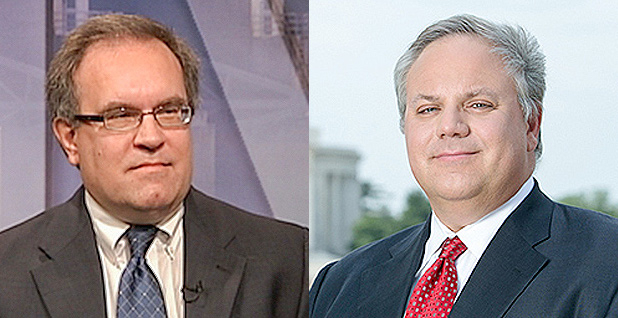 (Left to right) Andrew Wheeler and David Bernhardt are rumored contenders to be the No. 2 officials at U.S. EPA and the Interior Department, respectively. Photos courtesy of E&ETV and Brownstein Hyatt Farber Schreck LLP.

Now that President Trump’s energy and environmental Cabinet leaders are in place, picks for their lieutenants are expected to soon follow.

There haven’t yet been formal announcements about the deputies for U.S. EPA and the Interior and Energy departments, but names of rumored front-runners have emerged. The White House has begun to announce nominees for some sub-Cabinet-level jobs, and selections for environmental agencies’ No. 2 slots could be made in the coming weeks.

"The deputies play a very critical role on the management team that executes the policies of the agency head and the White House," said Bob Sussman, who was EPA’s deputy administrator during the Clinton administration. "They have agencywide responsibilities. In contrast to the administrator, they are more focused on day-to-day issues, budgeting, and personnel and management, all of which are very important, particularly in times of change like this."

Each of Trump’s leaders for EPA, Interior and DOE come to their jobs as outsiders with no previous experience working inside the agencies they’re now heading. Some of the contenders for their deputies are former Bush administration officials, former congressional aides and a former leader of a state environmental agency.

At EPA, Andrew Wheeler and Donald van der Vaart are seen as the front-runners to become Scott Pruitt’s deputy administrator. They both met with Pruitt to discuss the job, according to several sources.

Wheeler, who is now at FaegreBD Consulting, was staff director and chief counsel for the Senate Environment and Public Works Committee under Sen. Jim Inhofe (R-Okla.). He was also an energy adviser to the Trump campaign. Among Wheeler’s lobbying clients last year was coal giant Murray Energy Corp., led by vocal Trump supporter Bob Murray.

Van der Vaart is the former secretary of the North Carolina Department of Environmental Quality. He penned a letter to Trump last year — along with other state environmental officials — telling him that EPA has "run out of control." That letter, published by North Carolina Health News, urged Trump to "return environmental leadership to the states."

As for Interior’s next deputy, former George W. Bush administration official David Bernhardt remains in the mix, according to several sources (Greenwire, Jan. 30).

Bernhardt was the department’s top attorney under Bush and worked on the Trump transition team. He worked under secretaries Gale Norton and Dirk Kempthorne. Bernhardt was solicitor from 2006 until 2009 and deputy solicitor from 2005 until 2006. He also served as counselor and deputy chief of staff to Norton and as director of the Office of Congressional and Legislative Affairs.

Some on the left are already attacking Bernhardt’s record.

"He epitomizes the revolving door that people are so skeptical of when you go from government to lobbying to the oil and gas industry back into government to represent those industries. It smells fishy," said Matt Lee-Ashley, a former Obama-era Interior official who’s now at the Center for American Progress.

Lee-Ashley pointed to Bernhardt’s record lobbying for energy and water companies while in private practice. He also warned that major scandals had happened at Interior "under his nose," including an ethics scandal involving employees in the Minerals Management Service (E&ENews PM, Sept. 10, 2008).

Brouillette was previously vice president at Ford Motor Co. and staff director on the House Energy and Commerce Committee for then-Chairman Billy Tauzin (R-La.). During the George W. Bush administration, he was assistant secretary of energy for the Office of Congressional and Intergovernmental Affairs.