Should Kavanaugh bow out of blockbuster SCOTUS climate case? 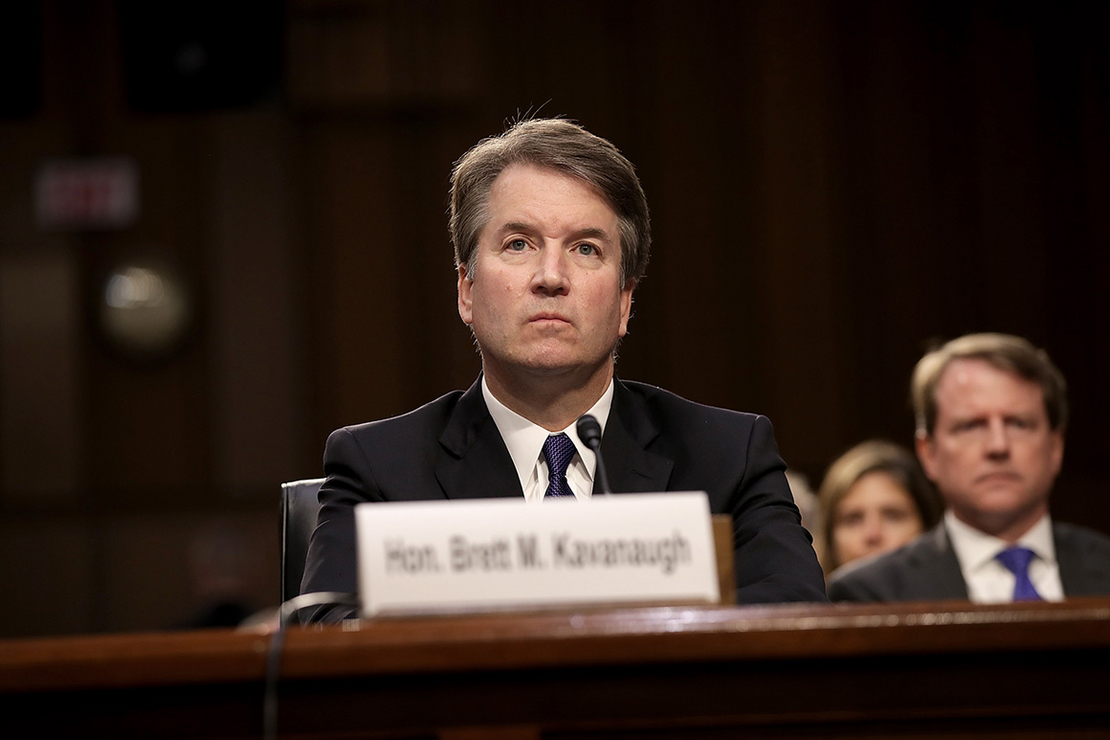 Supreme Court Justice Brett Kavanaugh was on the panel of U.S. Court of Appeals for the District of Columbia Circuit judges who heard arguments on the Clean Power Plan in 2016. Kavanaugh is shown at his confirmation hearing. Drew Angerer/Getty Images

As arguments approach in the most significant Supreme Court climate battle of the decade, there’s a question on the minds of some legal observers.

Should Justice Brett Kavanaugh recuse himself from the case?

In one of his final years as a judge of the U.S. Court of Appeals for the District of Columbia Circuit, Kavanaugh participated in marathon oral arguments on the Clean Power Plan, the predecessor to the rule that will be the subject of the Supreme Court’s Feb. 28 hearing in West Virginia v. EPA.

“This is just an extension of that litigation,” said Robert Percival, director of the Environmental Law Program at the University of Maryland. “I’m sure he’s got a draft opinion from that case that he’d like to trot out here.”

The D.C. Circuit never reached a decision on the legality of the Obama administration’s Clean Power Plan, which would have required existing power plants to slash emissions by 32 percent from 2005 levels by 2050.

Before the court could rule in the case, former President Trump took office and offered up the Affordable Clean Energy rule, which gutted the Clean Power Plan and was eventually struck down by the D.C. Circuit, giving rise to the challenge that is now before the Supreme Court.

“It seems like what we have here is a thin — people disagree with the adjective — but a thin statute,” Kavanaugh said partway through the September 2016 arguments. “It wasn’t designed with this specifically in mind.”

The Supreme Court did not respond to a request for comment for this story.

West Virginia v. EPA is an exceptional case: Instead of waiting for the Biden administration to write a new carbon rule — as the D.C. Circuit allowed by striking down the Trump regulation last year — the Supreme Court has agreed to preemptively review EPA’s authority to issue such a regulation in the first place.

Kavanaugh’s 2016 remarks on the Obama rule served as “potentially a much broader statement about EPA’s authority under the Clean Air Act,” said Karen Sokol, a law professor at Loyola University.

She continued: “To me, bringing that all in does seriously question his ability to be neutral and to actually hear this case anew.”

But although the legal battles over the Obama- and Trump-era EPA carbon rules involve many of the same lawyers and arguments, the cases are distinct, meaning Kavanaugh’s objectivity is not directly compromised, said Louis Virelli, a law professor at Stetson University.

“It’s important to distinguish between the decision to recuse and the power to make it,” he said. “People are entitled to their own views of whether Kavanaugh should recuse, but in this case, he’s not required to because it’s not the same case.”

Supreme Court recusals are a murky — and divisive — topic.

The issue of judges removing themselves from cases due to financial conflicts was the focus of Chief Justice John Roberts’ 2021 year-endreport, illustrating his awareness of public skepticism about the court’s choices, said Virelli.

That skepticism has been heightened in recent years by Republican maneuvering to ensure that Trump had the opportunity to nominate three Supreme Court justices, entrenching a 6-3 conservative majority on the bench for years to come.

“The thing that makes people so uneasy about Supreme Court recusals is there is no supervisory body,” he said. “No one’s watching the justices. They’re not even watching each other.”

Recusals were a major topic of discussion in one recent environmental case, BP PLC v. Baltimore, a hypertechnical battle related to climate liability lawsuits against fossil fuel firms. Justice Amy Coney Barrett participated in the case, even though her father had worked for one of the companies involved in the challenge (Climatewire, May 24, 2021).

Justice Samuel Alito, who holds stock in two other companies involved in the case, did step back from the proceedings.

Federal recusal standards require jurists to step aside when they have direct family or financial conflicts or when there is an appearance of partiality in a case. The decision to recuse is left to the justices, and when they do back out of cases, they typically do not explain why.

“We’re operating under an appearance standard here,” Virelli said. “Certainly Kavanaugh could justify recusing himself, in my view, if he were concerned about appearance, but that would make him a relative outlier in Supreme Court practice.”

It’s not unheard of for justices to be conflicted out of cases they’ve heard in the lower courts — even if they didn’t participate in the decision.

When the Supreme Court heard arguments in the 2011 climate case American Electric Power Co. v. Connecticut, Justice Sonia Sotomayor was absent from the bench, as she had heard the case as a judge of the 2nd U.S. Circuit Court of Appeals.

She did not participate in the 2nd Circuit decision, which was released shortly after her promotion to the Supreme Court.

While the court reached a unanimous 8-0 decision in AEP that rejected federal common law claims against power companies for emitting greenhouse gases, Sotomayor’s recusal led the court to split 4-4 on a key question of whether the challengers in the case had standing to make their claims in the first place.

When the justices deliver a tie vote, the decision by the lower court stands.

But in AEP, Virelli said, the case that reached the Supreme Court was exactly the same as the one Sotomayor had heard in the 2nd Circuit.

Justices may examine cases that deal with the same legal issues they have considered before, so long as the facts are different, he said.

“The recusal issue here would hinge on how close the cases are,” Virelli said.

While the battles over the Trump and Obama carbon rules are distinct, legal observers note that coal companies and red states have spilled a lot of ink shaping West Virginia v. EPA to focus on the dangers of resurrecting the Clean Power Plan — or a rule like it.

The argument has served as the challengers’ anchor in their unprecedented bid for the Supreme Court to upend its normal procedures and review a regulation that does not yet exist.

The justices agreed to examine the question, even though Biden’s EPA has said it had no plans to return to the Obama rule, whose goals the power sector had met more than a decade early.

Percival of the University of Maryland said it’s difficult to see where the Clean Power Plan litigation ends and the Affordable Clean Energy rule battle begins.

“Kavanaugh’s clearly been influenced mightily by that litigation,” Percival said.

Many court watchers said the justices likely agreed to hear West Virginia v. EPA because the newly bolstered conservative wing now has more than enough votes to grant cases and build majorities — without the help of any liberal colleagues and without having to worry about the threat of one rogue swing justice (Greenwire, Nov. 1, 2021).

Some groups are now calling for dramatic reform to address conservatives’ grip on the court. Recommendations range from adding new seats to bolstering conflict-of-interest procedures.

“It’s becoming increasingly important to realize that this is outside the norms of legal argument, and it’s a dramatic departure from the normal processes that are in place to ensure we have a workable government,” said Sokol of Loyola University.

Ultimately, Virelli said, Kavanaugh will be the one to decide whether to step back from West Virginia v. EPA — but he thinks it’s unlikely. It’s difficult to prevent judges from deciding similar cases over the course of their careers, he said.

“The ethical concerns around recusal are not: ‘We know how the justice will come down in this case,’” Virelli said. He added: “That is not an ethical problem in and of itself.”